<img src="http://www.qromag.com/wp-content/uploads/2012/05/tenaciousdtheriseofthefenix.jpg" alt="Tenacious D : Rise of the Fenix" /><br /> Everything that makes for an enjoyable Tenacious D record is present on their new album <i>Rize of the... 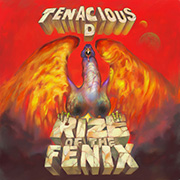 Everything that makes for an enjoyable Tenacious D record is present on their new album Rize of the Fenix.  Jack Black’s surprisingly proficient vocal chops abound with the perfectly placed harmonies of his partner in crime, Kyle Gass, and all of it is backed by a wall of sound comprised of heavy guitars and even heavier drums performed by the great Dave Grohl, who has lent his drumming talents to every Tenacious D album thus far.  Other than that, F-bombs and questionable content abound on tracks like "Senorita", "Deth Star", and track eleven, the name of which probably shouldn’t be typed.

Not many other bands can release only three albums in eleven years and still have their fans salivating for more.  Obviously, Tenacious D isn’t for everyone, but JB and KG would be the first ones to say that they don’t care.  They are going to continue on their quest to get the world to view them as the greatest band of all time.

We last heard from ‘The D’ back in 2006 with the dual release of their last album The Pick of Destiny and their movie of the same name.  Even though both were flops commercially (Black mentions this in the title track of the new album), in their own minds, the only realm where much of anything matters to them, they were successful – and anyone who thinks otherwise can probably go do something involving expletives and, again, questionable content that only Kage and Jabels would be able to dream up.

Tenacious D albums are known for their hilarious skits in between songs.  Skits like "One Note Song" and "Inward Singing" were essentially what made their debut album such a wild success and the actual songs, while good in their own right, almost took a backseat.  Listeners will be excited to find that skits are again present on Rize of the Fenix; however, there are only two of them: "Classical Teacher" and "Flutes & Trombones", the latter only being about a minute and a half long and the former being reminiscent of Black’s classic performance in the movie Nacho Libre.

One of the album’s best tracks is only a minute long.  It is the second to last track, "To Be the Best".  It is a simple high-energy track that is everything that lovers of the ‘80s will cherish.  Another notable track is "The Ballad of Hollywood Jack and the Rage Kage", which addresses the idea of Black and Gass’ relationship in light of Black’s success in Hollywood.

Ultimately, Rize of the Fenix exhibits nothing new from The D, but how many different directions can they realistically go?  It’s not a disappointment, just more silliness.  Tenacious D is an example of a band that is boxed in, but maybe in a way that is okay.