Texas returns to The Conversation.... 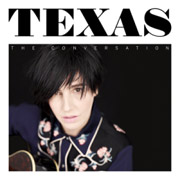 Glasgow’s Texas broke through back in the early nineties with White On Blonde, behind intimate-epic rock and frontwoman Sharlene Spiteri’s interesting, soul singer-like charm.  They didn’t jump in your face, but rather wrap you in their net.  While no following record quite hit Blonde’s height (and they remained largely a U.K.-only success), they explored other avenues somewhat on following records, before going on hiatus late last decade.  Spiteri embarked on a solo career, guitarist Ally McErlaine nearly died after an on-stage brain hemorrhage – it seemed like everyone was going their separate ways.  Well, Spiteri’s back with the band, McErlaine’s back on his feet, and Texas are back with The Conversation, as they explore a more country side.

Yes, please hold your comments about a band named ‘Texas’ going country (the Scots are actually named after the Cannes Palm D’or winning film, Paris, Texas), as it actually makes sense.  Spiteri may look like a pale Hibernian (though a pretty one – the record keeps the long tradition of putting her on the cover, but this time in denim…), yet her soulful voice has a beguiling nature that works well in the genre, while McErlaine upped the twang on his guitar (and the band as a whole lessened the keyboards from their last, 2005’s Red Book).  Overall, the new angle still works best when the band goes their bigger route, such as the uplifting and strong “Detroit City”, while the torch cabaret numbers “I Will Always” and “Maybe I” feel over-maudlin (a better torch is the bigger “Heats Are Made To Stay” just after “Maybe”).  However, there is also Conversation’s killer lead-off track/single of the same name, where just McErlaine’s simple guitar twang and Spiteri’s laser focus bores into the listener.

Some (like QRO) will probably compare Texas’ return to that other female-fronted nineties Scottish alt-rock outfit who recently reunited after the leading lady had a solo career, Garbage (QRO album review) – though only Garbage singer Shirley Manson is from Scotland (the rest are from Wisconsin – and she’s from hoity-toity Edinburgh, not salt-of-the-earth Glasgow like Texas & The Late Late Show’s Craig Ferguson…).  And while Spiteri never appeared on a Terminator TV spin-off (though she will be a judge on Sky1’s Must Be the Music…), there is a certain similarity in that both acts were never super-alt, just came to prominence during alt-rock’s heyday.  Yet Texas has probably had more variety, and that continues in their return to The Conversation.