The Autumn Defense double down on their softness on their Fifth full-length.... 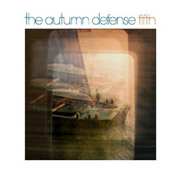 These days, it can seem like every sonic style since the Second World War has come back in one form or another, from fifties garage rock to sixties jam, seventies disco to eighties new wave, nineties shoegaze to whatever happened in that last decade we never named.  Yet one unexplored sound has been the soft rock of the sixties and seventies, the sweet marriage of folk and pop that went from dominating the airwaves to being ridiculed (unlike, say, disco…).  However, The Autumn Defense double down on their softness on their Fifth full-length.

While John Stirratt and Patrick Sansone will probably always be known best for their full-time gig in alt-country mega-act Wilco (QRO live review), they’ve nicely been fashioning a second name for themselves as The Autumn Defense for years now, and Fifth continues that trend.  What’s particularly interesting is that their latest record goes further into their signature soft sweetness, from bright opener “None of This Will Matter” to wistful closer “What’s It Take”.  This does mean that they eschew some of the catch found on earlier pieces like “Canyon Arrow”, and they can get a little too earnest at times (“Can’t Love Anyone Else”).  But it also opens them up to new ways of softness, like the slyer “Calling Your Name”, almost madrigal in lightness “Under the Wheel”, and the great tropical cabana “Why Don’t We”.

If you think rock has to ‘rock’, or if you don’t like anything you can’t twerk to, then The Autumn Defense is clearly not for you.  But with disco straight out of the seventies like Daft Punk’s Random Access Memories (QRO review) topping the charts and critic’s lists, it’s high time to relax with something softer from then.

The Autumn Defense – Why Don't We