The Band CAMINO took the stage by storm as they played to a packed house at Old Forester’s Paristown Hall in Louisville, with openers flor and Hastings.... 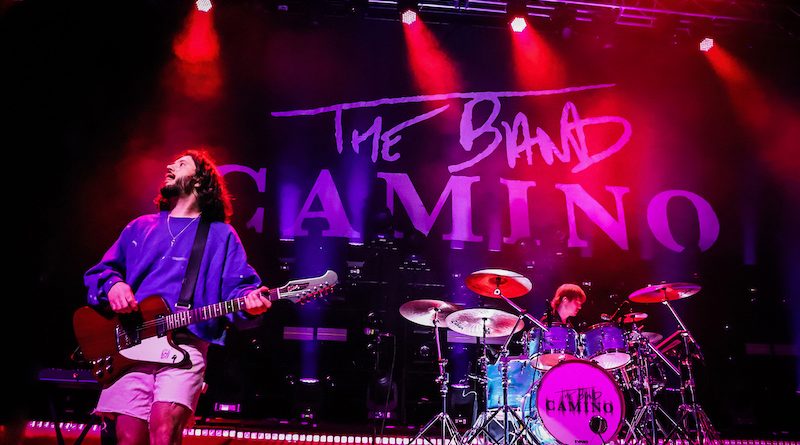 The Band CAMINO took the stage by storm on Wednesday, March 23rd, as they played to a packed house at Old Forester’s Paristown Hall in Louisville, with openers flor and Hastings. This was their first night of “The Tour CAMINO,” and fans were nothing short of excited. Coming from many different parts of the country and some getting to the venue as early as 8am to secure their spot at the barricade, it was very obvious that TBC has made lasting impacts on many of their fans. There was even a big group of fans that had gotten there early who were all meeting in person for the first time, after meeting on Twitter through TBC. It was obvious how special this band is to them, and it was very beautiful to see the meaningful relationships and connections that The Band CAMINO’s music has created.

Click here for photos of Hastings at 2022 Hangout Festival in Gulf Shores, AL in the QRO Concert Photo Gallery

As doors opened and fans lined the barricade in their light up cowgirl hats, it was soon time for Hastings to take the stage. Opening with his recent single, “Chapstick”, he made it very clear that he was just getting started. He carried on with hit songs such as “Blank Me” and “Hurt My Feelings”, leaving the crowd wanting more as he left the stage. After his set, Hastings came out into the crowd and took the time to speak with every fan who came up to him. I think it is safe to say that Hastings gained many fans that night.

Next up in this incredible roster was American indie band flor. They opened with their hit song “Play Along” and only upped the energy from there. Almost everyone in the room was dancing along and enjoying their time as they anticipated The Band CAMINO’s arrival to the stage. flor continued on with songs such as “back again” and “restless soul” before they finished their set out with “warm blood”.

Click here for photos of The Band CAMINO at Promowest Pavilion at Ovation in Newport, KY on June 8th, 2022 in the QRO Concert Photo Gallery

Click here for photos of The Band CAMINO at 2022 Hangout Festival in Gulf Shores, AL in the QRO Concert Photo Gallery

Click here for photos of The Band CAMINO at 2019 Riptide Festival in Ft. Lauderdale, FL in the QRO Concert Photo Gallery

Click here for photos of The Band CAMINO at Bowery Ballroom in New York, NY on April 3rd, 2018 in the QRO Concert Photo Gallery

You could feel the excitement in the room as it neared 9pm. The crowd was beyond excited to see the group on their first headline tour in a few years. Soon enough, the lights went low and The Band CAMINO entered the stage with their hit song, “Know It All”. Fans were screaming every word right back to the band and you could just see the pure joy on their faces. It was very obvious how special The Band CAMINO is to their highly dedicated fans. They followed up “Know It All” with their smash hit “Roses”, where the crowd may have been singing louder than the band at parts. They continued with fan favorites “2 / 14”, “Song About You”, and “Underneath My Skin” before getting into the tear-jerkers, “Damage” and “Help Me Get Over You”. The energy radiating through Old Forester’s Paristown Hall was truly immaculate. Everyone was there to have a good time and enjoy live music, and The Band CAMINO was definitely making this happen.

Of course, it wouldn’t be the first night of the tour without some mishaps though. Shortly after entering the stage, singer/guitarist Spencer Stewart announced to the crowd that he had just left the Emergency Room a mere 30 minutes prior to showtime. He explained that he has a tree nut allergy and accidentally ate a cashew earlier in the day, causing him to have an allergic reaction. Thankfully he is okay and was properly taken care of at the hospital, as he thanked UofL Hospital for taking care of him during that scary time.

As the wonderful night with The Band CAMINO neared the end, the band went into fan-favorites such as “What I Want” and “See Through” off of their third EP, tryhard. The band refrained from leaving the stage and coming back for the encore, so they instead just stayed and played their smash hit “1 Last Cigarette”, which had everyone in the room jumping and singing along. As the show came to a close, The Band CAMINO put on cowboy hats and rocked the stage one last time with “Daphne Blue”.

Lead singer Jeffery Jordan even came out after the show to greet fans who were waiting by the tour buses. He signed items for fans, took photos, and took the time to speak with each individual fan, staying to meet every last one of them. It is very obvious how much The Band CAMINO cares about their fans and how special of a community they have created with their music. It was also a very inclusive community, as they even had a sign language interpreter standing side stage throughout the entire show.

The Band CAMINO definitely put on an amazing first show of The Tour CAMINO and gave fans a night to remember. Be sure to check them out if you have the chance! You won’t want to miss them live. Remaining dates: https://www.thebandcamino.com/tour