For the 50th anniversary of their first trip to the U.S., Morrison Hotel Gallery Loft hosted a photo exhibit of the Fab Four.... 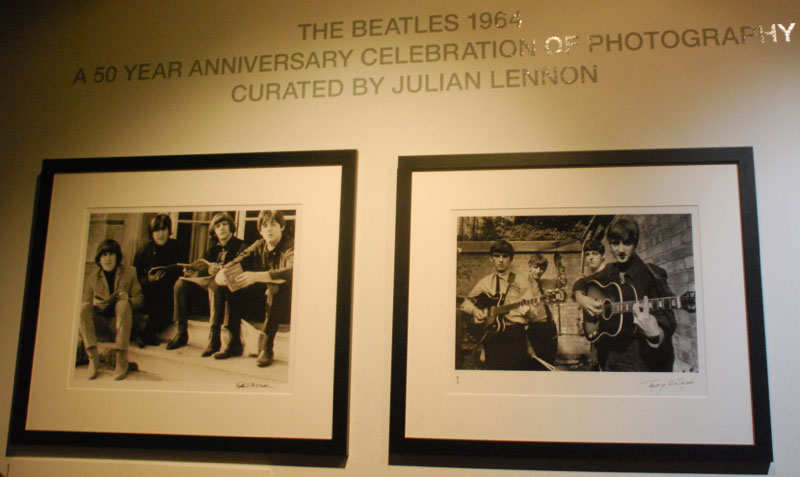 We’re still not yet at the centenary of the Fab Four that D.C. punks N.O.U. talked about twenty years ago, but recently New York celebrated the fiftieth anniversary of The Beatles’ appearance on The Ed Sullivan Show, the event that launched them into American success.  The Late Show with David Letterman, which is held at The Ed Sullivan Theater, celebrated the anniversary all week long (QRO Music on Late Night TV – which unfortunately was also the last week of his time slot rival, Jay Leno, over on The Tonight Show) with modern artists performing classic Beatles songs.  And Morrison Hotel Gallery Loft (QRO venue review) in SoHo celebrated by opening up a new photo exhibit on Thursday, February 6th. 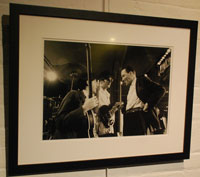 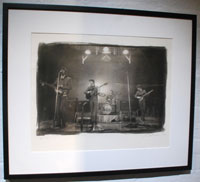 The photos were curated by Julian Lennon, though he unfortunately wasn’t in attendance at the event (Sean Lennon was seen at the after-party at SoHo Grand – he had played “Lucy In the Sky With Diamonds” earlier that day on Letterman with The Flaming Lips, and appeared with The Lips & his mother the previous day at the end of the lengthy Amnesty International ‘Bring Human Rights Home’ concert at Beacon Theatre – QRO recap).  The photos are weighted towards The Beatles’ earlier years, 1963 & ’64, when they were at their most photogenic.  There are staged photos, such as with Muhammad Ali (then still Cassius Clay), as well as performance ones from not just The Ed Sullivan Show but also their first-ever U.S. gig, at Washington Coliseum.  One of the many funny Beatles stories overheard was about that D.C. appearance: apparently someone in the band had mentioned to the media that they liked jelly babies, a British confection that American fans took to mean jelly beans (actually, they’re more like gummy bears), so fans brought jelly beans to the D.C. appearance – and threw them at the band, leaving some stings… 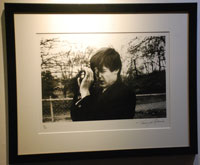 Particularly special, however, are the intimate and unstaged moments.  You can see them playing with a matchbox car track in Indianapolis, or poolside in Los Angeles (with Ringo wearing a towel, presumably over his wet bathing suit).  There’s even one of Paul McCartney with his eye in his own camera lens.  The private opening reception wasn’t just VIPs like CBS News’ Anthony Mason and Pattie Boyd (photographer and George Harrison’s first wife – also the first wife of Eric Clapton’s), but also ‘regular’ fans, like one who’d been at The Ed Sullivan Show taping, and another who had a very well-kept thirty-year-old Beatles t-shirt.  They even aired on a projection The Ed Sullivan Show appearance (which was of much poorer quality than the ultra-crisp photos, but such was television back in those days), so fans could put shadow bunny ears on John.

Despite what was actually a relatively short lifespan for a group of such significance (as opposed to, say, the still-together Rolling Stones…), The Beatles made a huge transformation from their bubblegum pop early days to psychedelic and blues later years.  Kids may still ask, “Who the fuck is Paul McCartney?”, and a contemporary picture won’t help (just ask Craig Ferguson…), which is why it was great to see the Fab Four when they were Fab.