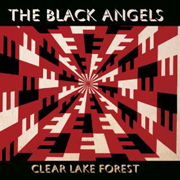 The Black Angel’s Clear Lake Forest is a great album. It invokes a ‘60s influence previous albums showed, but embracing it even more. Darker, more personal, and more expressive than previous albums, it jangles, deals with personal struggles, and then erupts into lively free flowing rock, in places where some previous albums droned. This is primarily a good thing, only perhaps losing a bit of the great drums they always have in the process.

“Tired Eyes” has great drums, leading into the type of slinking jangled chorus seen throughout the album. “The Flop”, “Diamond Eyes”, and “An Occurrence at 4507 South Third Street” all follow the same type of rhythmic fuzz. The album finishes with two comparable songs, “The Executioner”, and “Linda’s Gone”. “The Executioner” is really good, piercing, and catchy. “Linda’s Gone” slows down to a contemplative crawl, sad, and ethereal.

There just aren’t that many albums like this these days. It strikes the perfect balance between energy, and meditation. Which might explain the album title. Overall, a well constructed, bold, and vintage departure from the modern indie landscape. Leaving the listener with guitar rhythms, and melodies haunting them. It will be an album to hold on to.

It is worth noting, in hopes of better understanding Clear Lake Forest’s dark psychedelic nature that on The Black Angels Facebook page, the biography section gives a quote by Tommy Hall:

Since Aristotle, man has organized his knowledge vertically in separate and unrelated groups—Science, Religion, Sex, Relaxation, Work, etc. The main emphasis in his language, his system of storing knowledge, has been on the identification of objects rather than on the relationships between objects. He is now forced to use his tools or reasoning separately and for one situation at a time. Had man been able to see past this hypnotic way of thinking, to distrust it (as did Einstein), and to resystematize his knowledge so that it would all be related horizontally, he would now enjoy the perfect sanity which comes from being able to deal with his life in its entirety.

It is possible for Man to alter his mental state and thus alter his point of view (that is, his own basic relation with the outside world which determines how he stores his information). He then can restructure his thinking and change his language so that his thoughts bear more relation to his life and his problems, therefore approaching them more sanely.

It is this quest for pure sanity that forms the basis of The Black Angels.