Since it’s conception three years ago, the BUKU Music and Arts Festival has been building its reputation as one of the more unique and well-planned major music festivals in...
by Gloria Lee April 8, 2014 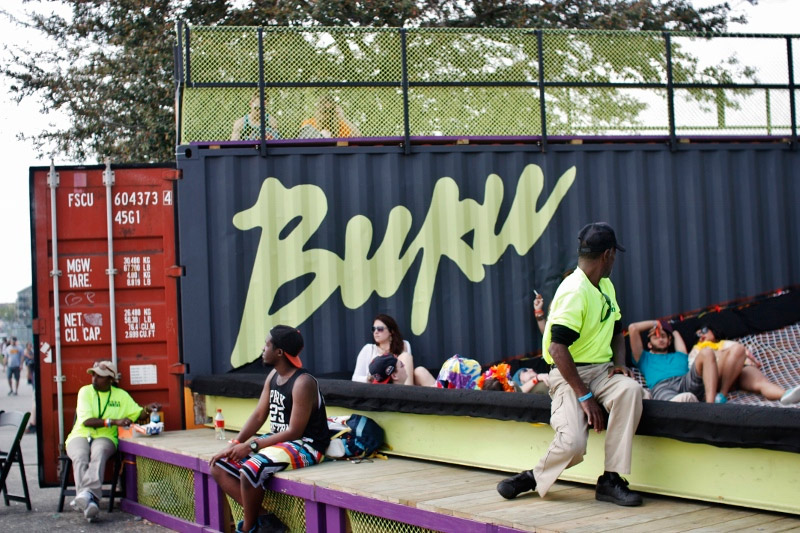 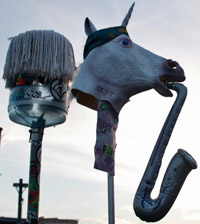 Since it’s conception three years ago, the BUKU Music and Art Project has been building its reputation as one of the more unique and well-planned major music festivals in the United States.  Located in the musically rich and stimulating city of New Orleans, expectations were high weeks before the festival weekend, March 21st & 22nd.  The fantastic lineup, exciting location, and warm forecast all pointed to a fail-proof Friday & Saturday.  But obviously, a music festival is much more than a bunch of outdoor concerts strung together – there has to be a holistic focus, a sense of identity and spirit that makes people want to come back every year.  Here is where BUKU shines.  Unlike many other non-camping festivals, BUKU makes sure that their signature vibe is incorporated into every aspect of the festival.  The artwork, the food, the acts, and even the attendees seemed to work together to create this incredible weekend of BUKU fun.

First thing’s first – what exactly is a BUKU?  BUKU is basically French slang for “plenty”.  Which was perfect because the lineup was packed with enough acts to satisfy everyone, from your too-cool indie rockers to your practically naked trap heads.  There were mountains of beer and food available near every stage (pizza, po’boys, beignets, you name it…), hoards of good-looking attendees, as well as a ton of tripped out artwork covering every inch of the grounds.  “Plenty” was practically the motif for the weekend. 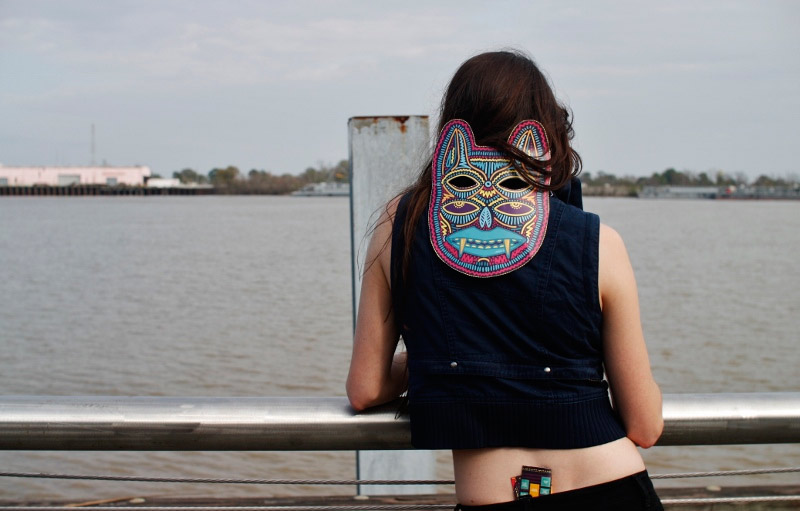 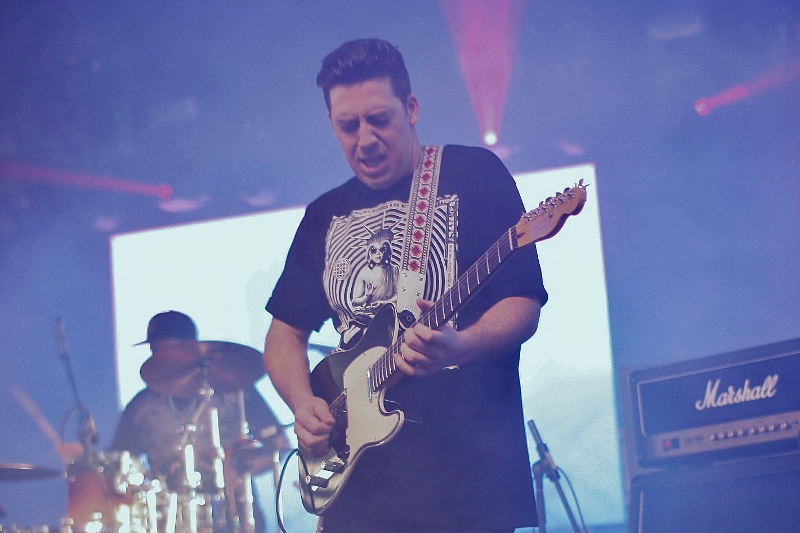 Conspirator, a band formed by the Disco Biscuits’ very own Aaron Manger and Marc Brownstein, played a fast driving yet steady set of electronic-jam music at the Float Den on Friday.  This crowd won the most-energetic-daytime-crowd award right off the bat, because even before Brownie picked up his guitar the crowd was dancing in full force. 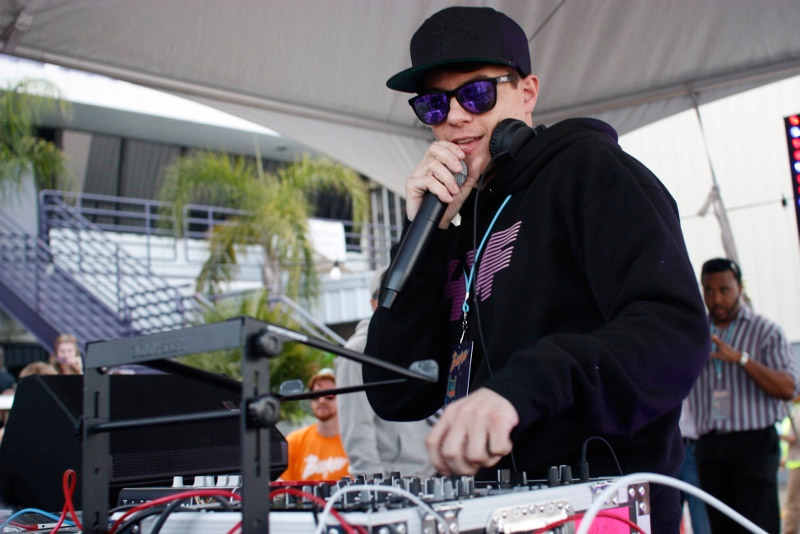 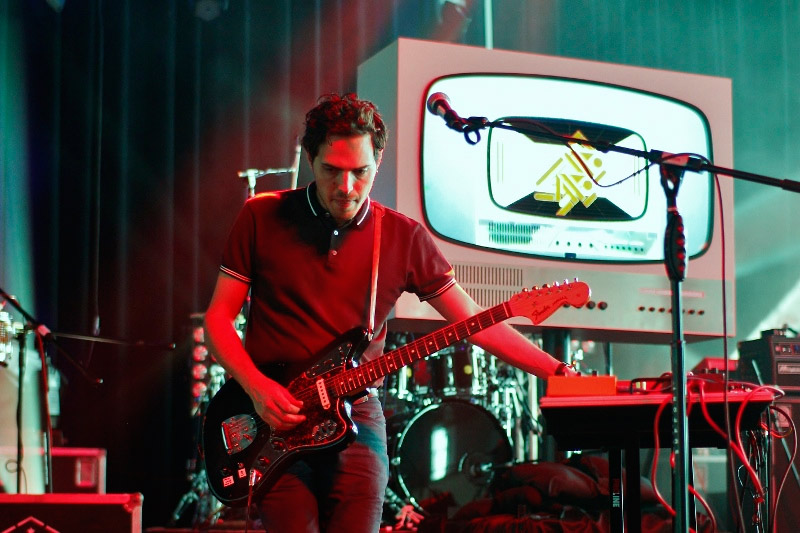 Playful disco act Classixx played at the Ballroom, an indoor stage, towards the later half of the evening.  The set up was neat, with the duo standing on the sides of a TV screen projecting looping variations of the Classixx logo.  In contrast to their fun and bubbly music, such as their Phoenix remixes and the popular “Holding On”, the duo looked pretty damn serious.  They were practically glaring at the crowd as they strummed their guitars and worked their synthesizers – who knew disco was such a serious art?  Regardless, the so the indoor-disco party was a welcome breather for everyone since the grounds were pretty hot and sweaty by then. 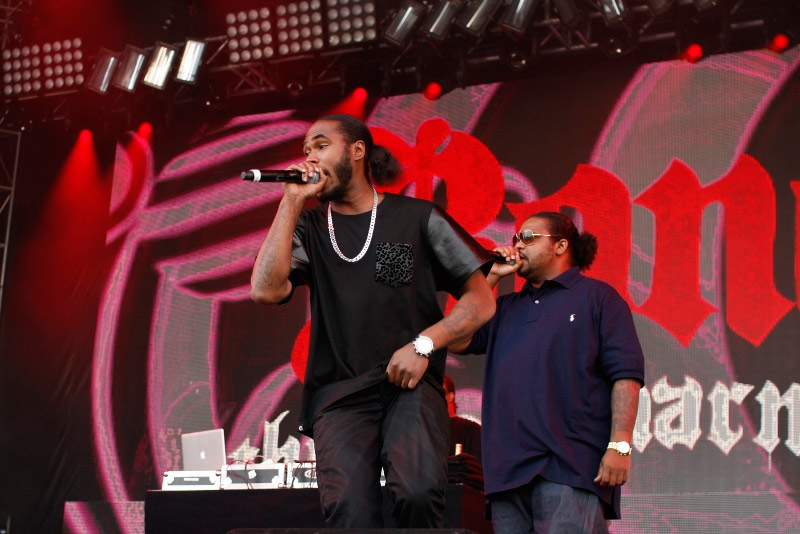 Cleveland’s rap group Bone Thugs-N-Harmony drew a sizeable crowd in front of the main Power Plant space, with Layzie Bone, Krayzie Bone, Wish Bone, Flesh-N-Bone, and Bizzy Bone all furiously pacing around the stage.  Hands and heads were sky high as the unique harmonized rap that echoed throughout the main area. 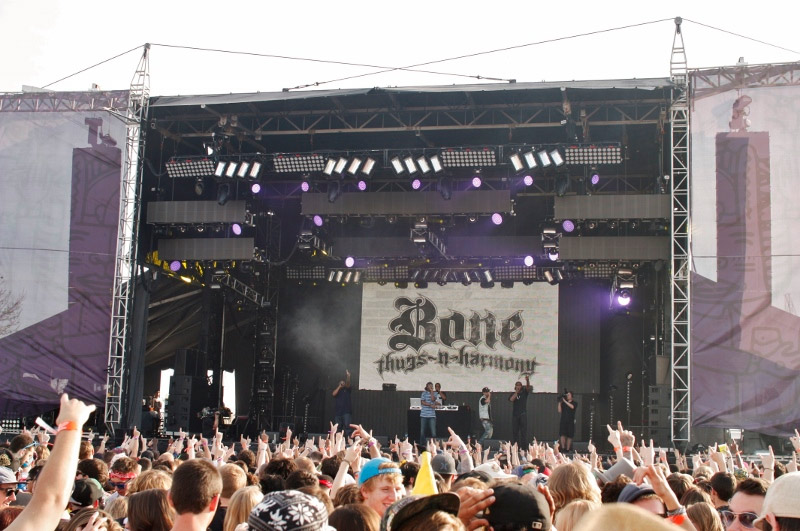 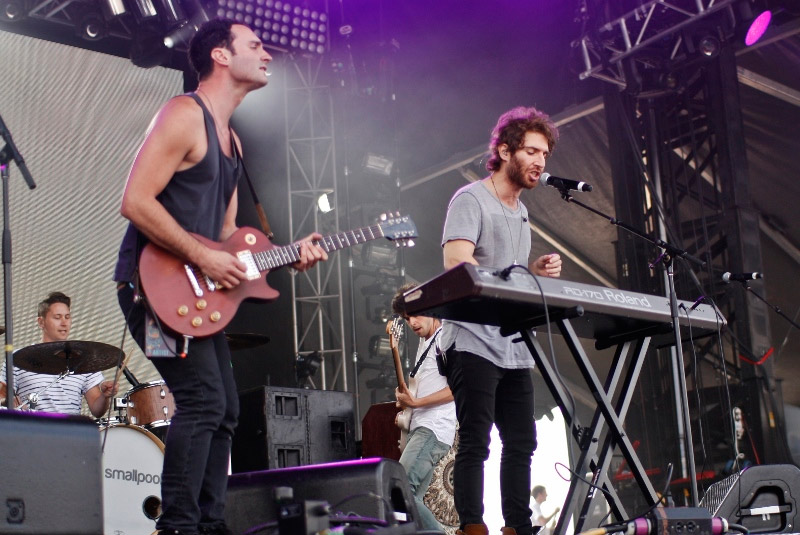 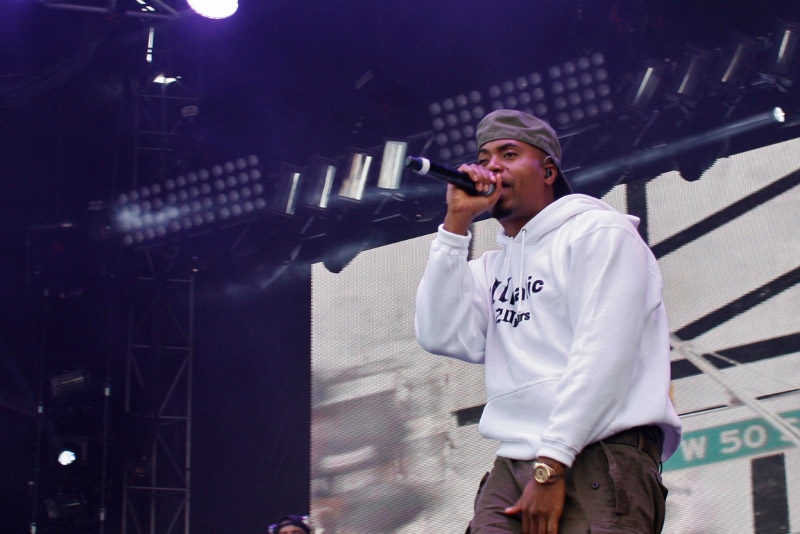 Later, Nas rose to the Power Plant stage just as the sun was going down on the first day for a very much-anticipated 20th anniversary celebration of his classic debut album Illmatic.  His visuals include scenes from New York City in the ‘90s, building up nostalgia and anticipation that culminated with the crowd spitting “New York (New Orleans) State of Mind” almost as fast as Nas could put it down.  Fun fact: Notable EDM DJ Green Lantern was spinning the beats for Nas’ set. 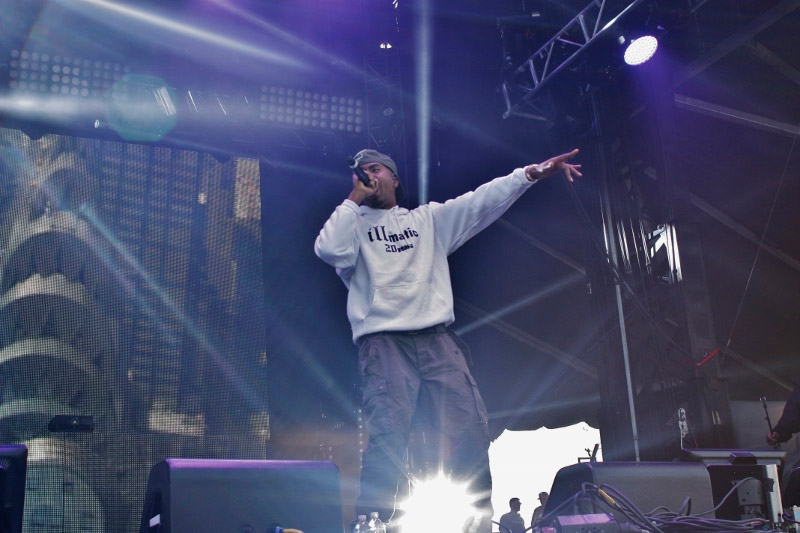 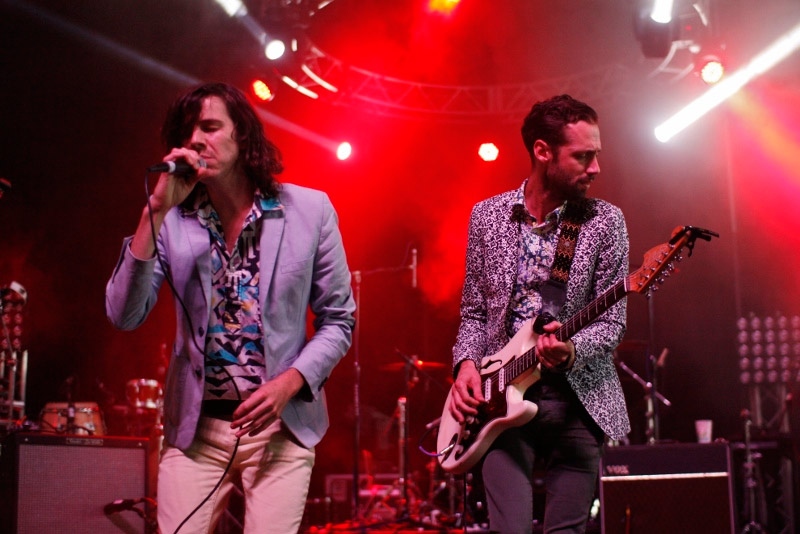 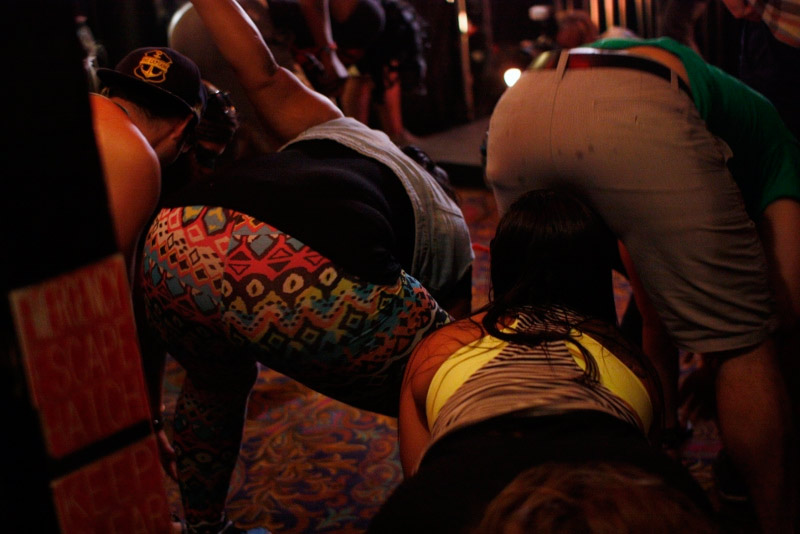 Shortly after, Louisiana native Big Freedia held a special twerk session for the lucky ones at the VIP boat.  Maybe the free drinks were getting to the VIP crowd, since few actually pulled it off, but of course it was fun (is it ever dull when you have Big Freedia gyrating his butt in your face?). 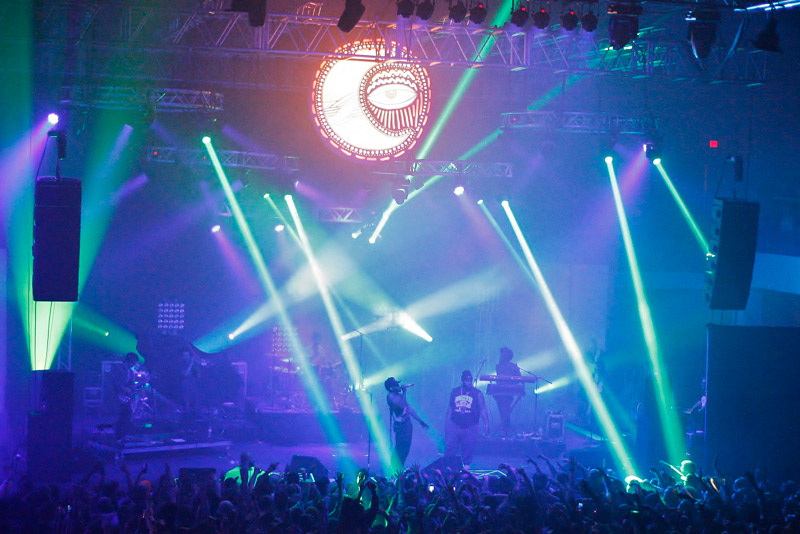 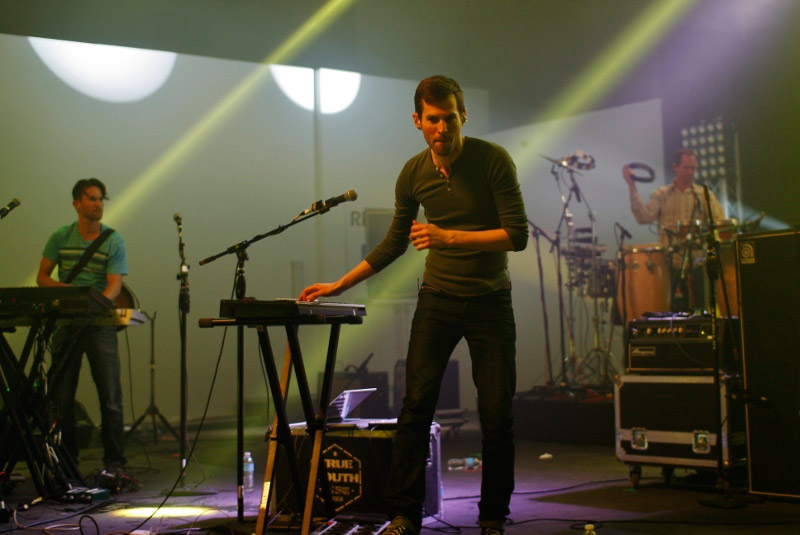 Lotus was the ideal conclusion to the night, as the stimulating and dynamic patterns of their music perfectly reflect the BUKU vibe.  As always, Lotus pulled off a fantastic set at the Ballroom stage, in front of the usual sea of passionate fans jamming underneath the ecstatic lights. 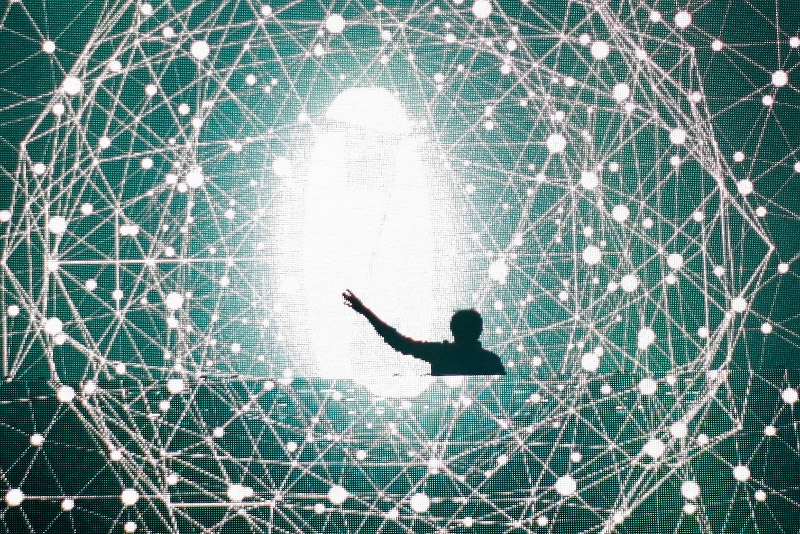 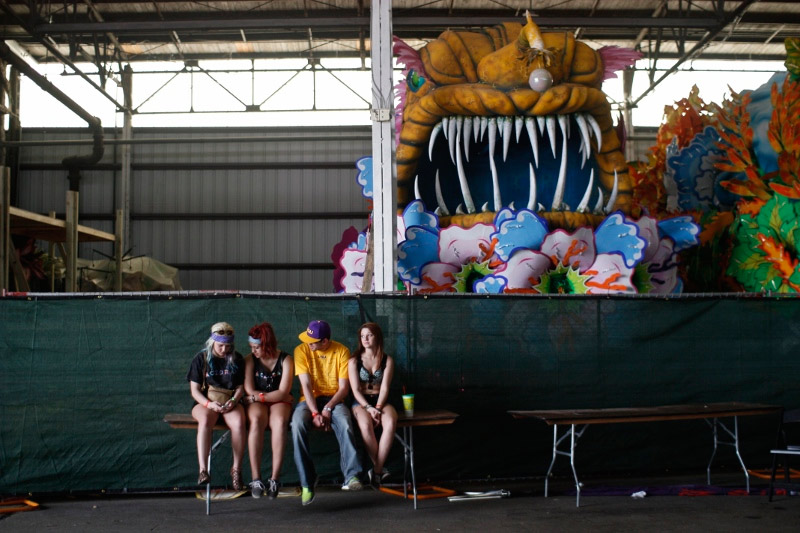 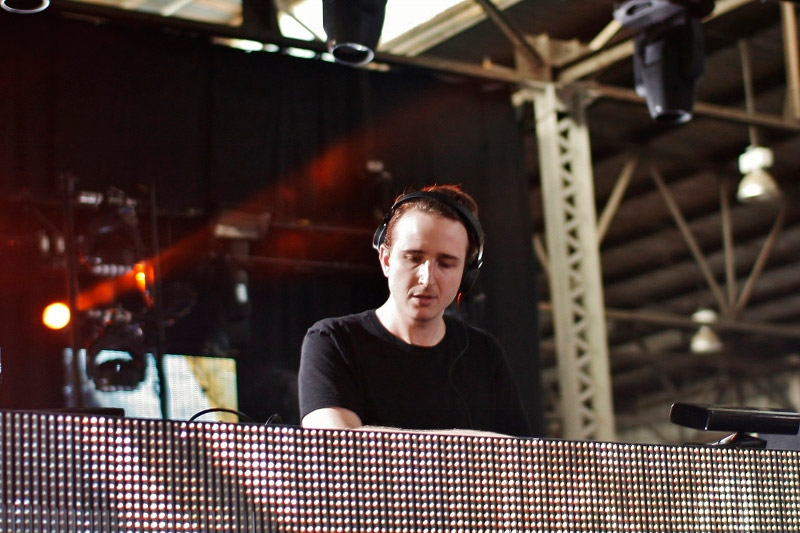 Early on Day Two, Blue Sky Black Death played a surprisingly fun set, filled with atmospheric trap music not too different from the style of producers like Odesza and Flume. 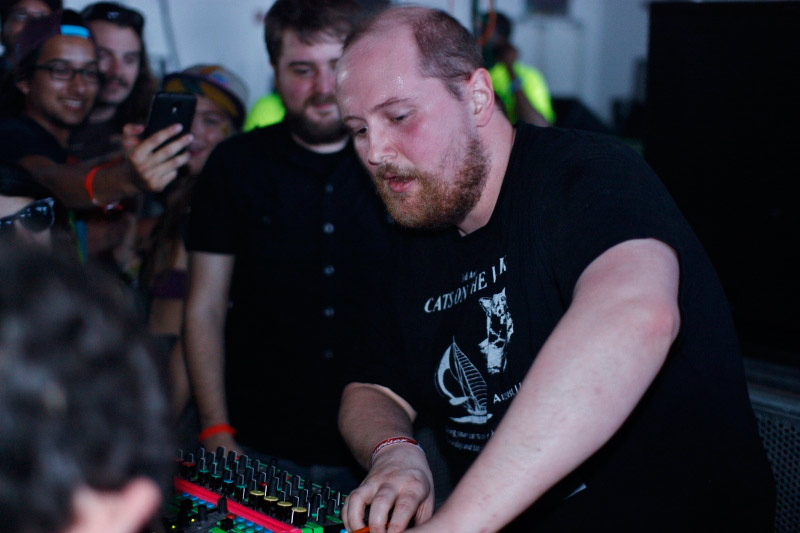 Dan Deacon, being the people-person he is, chose not to play on the stage and placed his set up right in front of the dance floor.  After shoo-ing the eager photographers with the world’s kindest get-the-fuck-out-of-my-face request, he spurred the daytime crowd with his ridiculous instructions and oh-so-engaging dance battles. 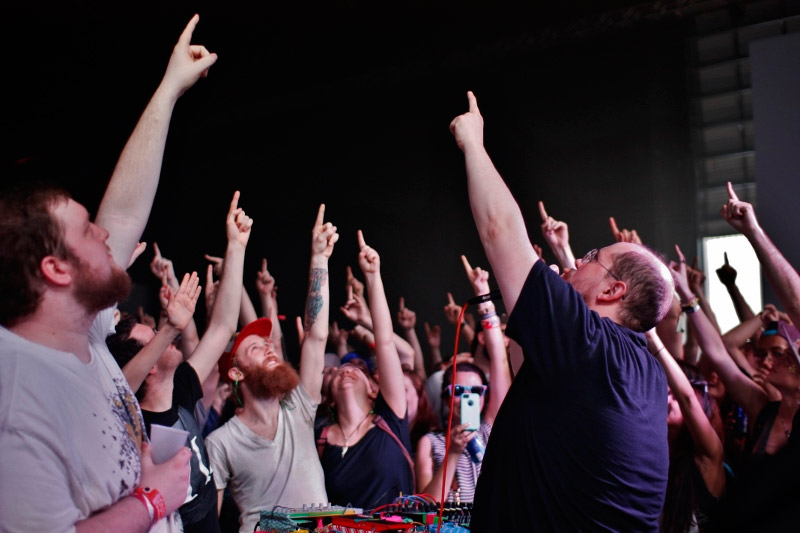 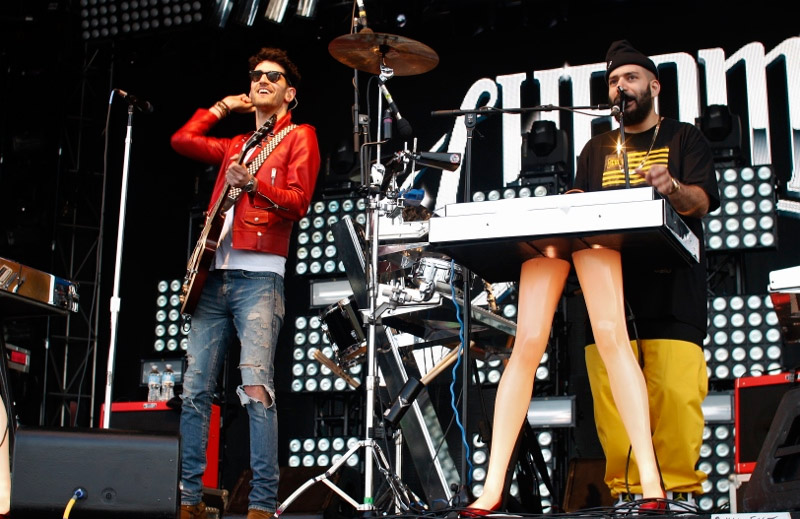 Chromeo started their sunset slot with the popular “Night by Night” and got the crowd grooving from the start.  As the sky became darker, the strobe lights shined so bright that the only thing visible were the dark outlines of the funk lords. 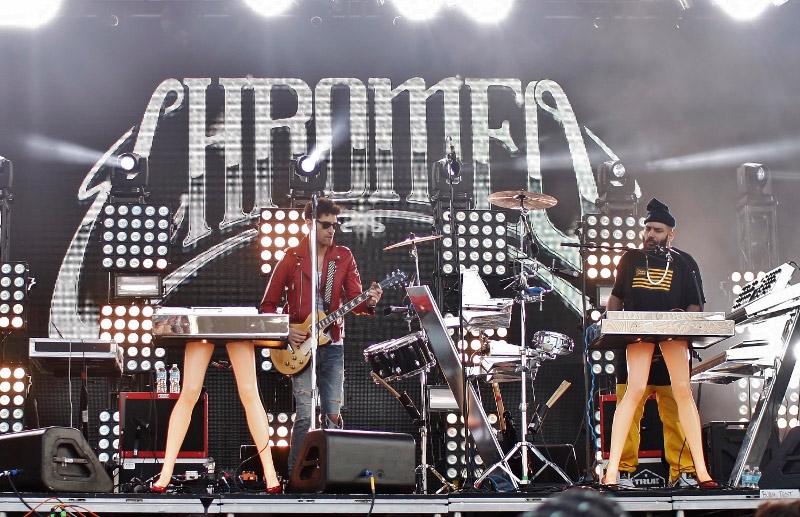 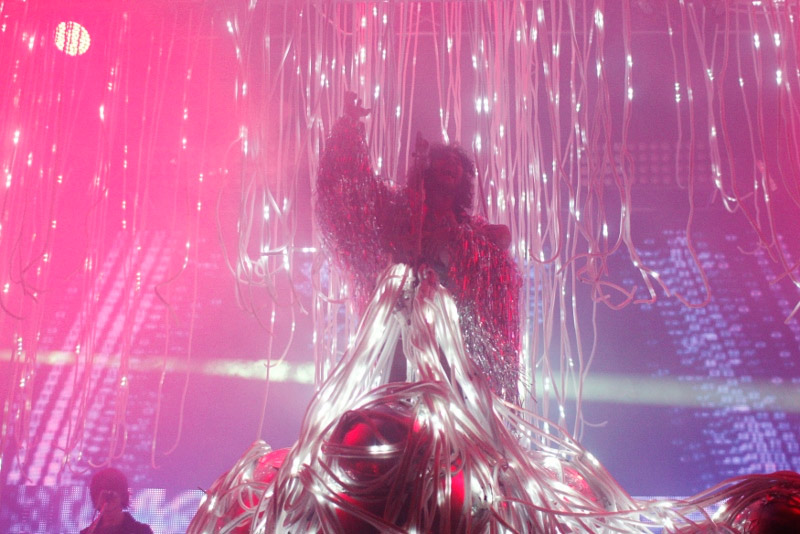 The only thing in BUKU that out-flashed the duo was the gigantic stage set up of The Flaming Lips.  Their quirky stage lights, costumes, and of course music, blazed the night sky with unbelievable energy. 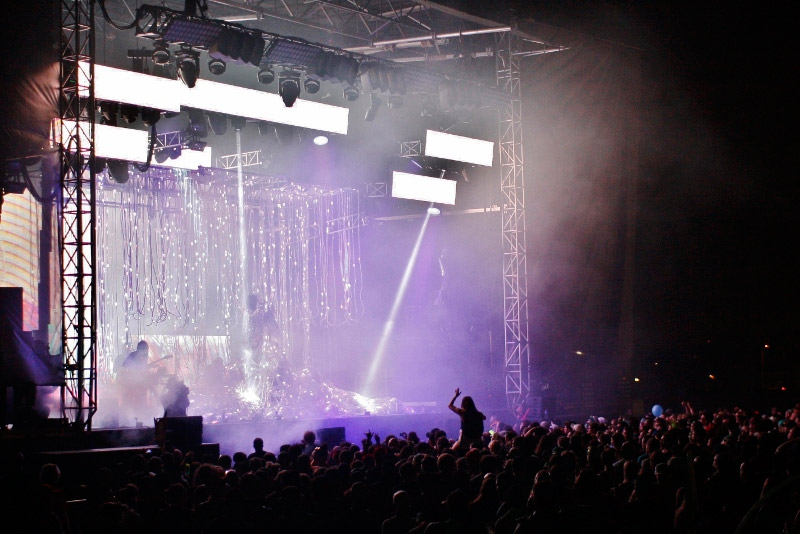 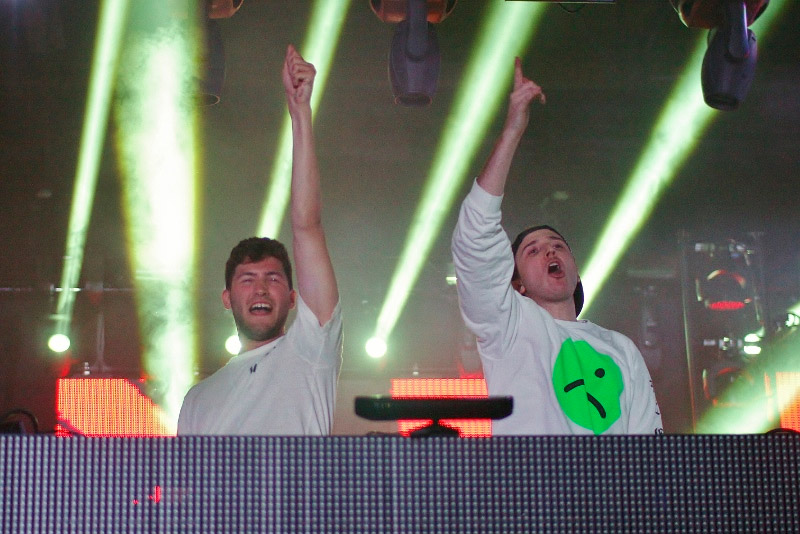 RL Grime & Bauuer, both gods in the trap game, dropped a double dose of bass and synced the crowd to the beat with energy that nearly brought down the float den.  The set was packed with their signature beats along with refreshing elements of hip hop and rap that made it easy to engage the crowd for the entire hour and 15 minutes. 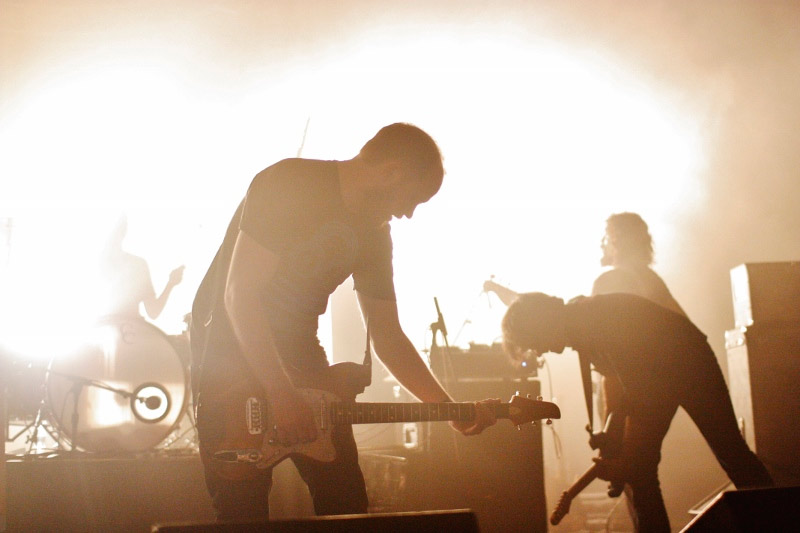 Explosions In the Sky later shook the Ballroom stage with the thundering post-rock and intense motions.  The performance was literally tear jerking as several members of the crowd were seen with streams of waterworks glistening on their face. 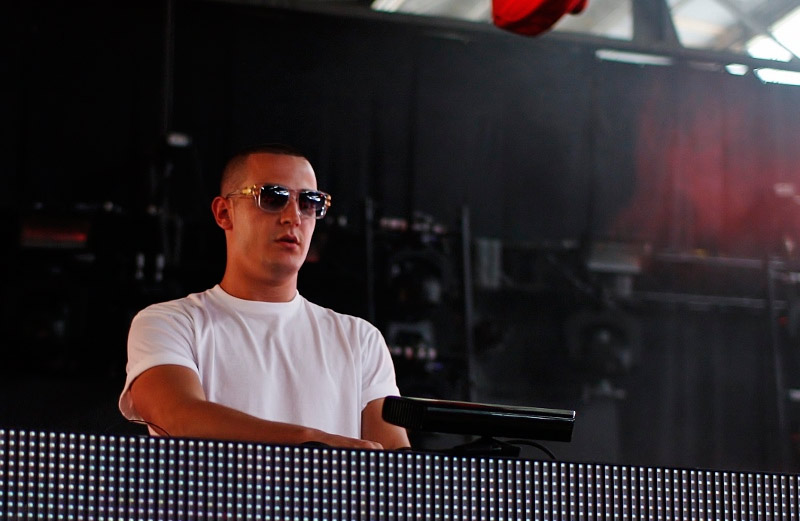 Meanwhile, ex-dubstep producer Skream spun in the Back Alley, demonstrating his newfound passion for disco for a huge crowd dancing and cheering without a break. 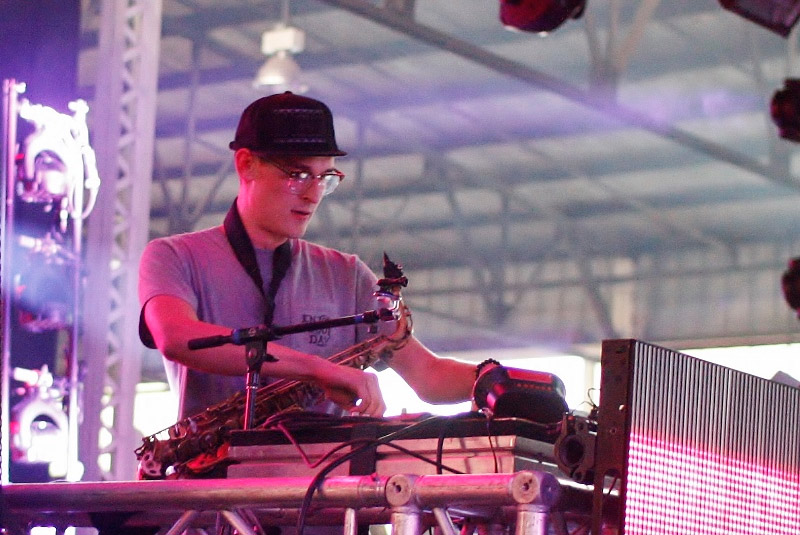 Tyler the Creator’s much anticipated set had the Float Den packed a full half hour before he came on.  He had his DJ spinning hits for the crowd’s enjoyment, which kept us going in the beginning but led to some confusion as to why he did not perform his own music.  He went on to explain that with his recent run-ins with the authorities made him reluctant to display any of his usual crowd engaging talents, however as his set went on he had the crowd screaming “Fuck the World”, saluting their cares away with middle fingers in the air.  Early in his performance, due to his recent confrontations with the media, he asked all the press be escorted out of the pit (what else is new?…). 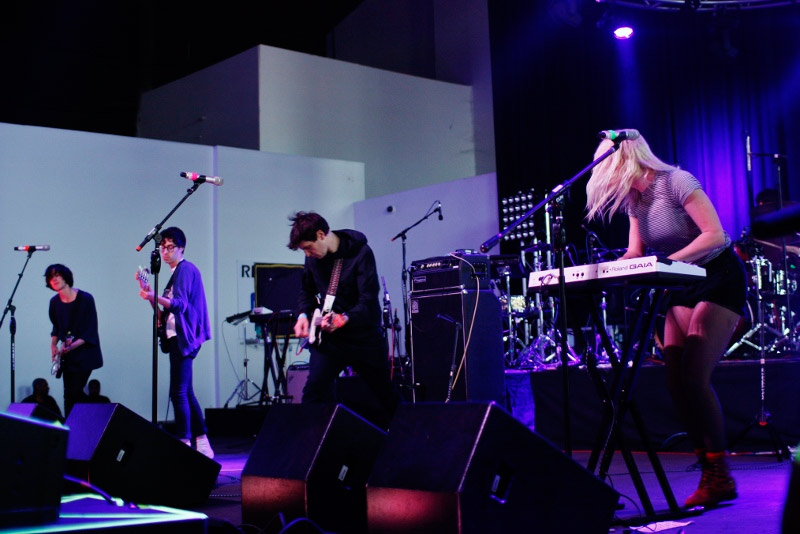 Headlining trio The Glitch Mob concluded the festival with an intricate and lengthy set.  Everything about their set seemed to be bigger than their previous performances, from the signature outward facing drum pads to the size of the enormous crowd.  The Glitch Mob showcased songs from their less-than-well received new album, Love Death Immortality (QRO review), but of course the majority tracks played were from Drink The Sea and their We Can Make the World Stop EP.  For almost two hours, the Float Den was warped with the hip-hop influenced bass lines interwoven with noisy and melodic electronica that gave the crowd enough energy for one final dance at the third BUKU Music and Arts festival. 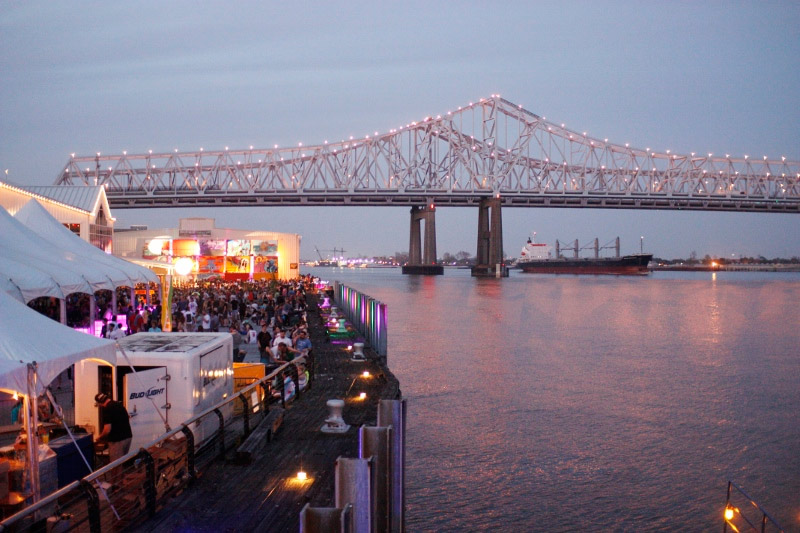