The Chain Gang of 1974 – Daydream Forever

The Chain Gang of 1974 may always be the personal project of Kamtin Mohager, but the “Gang” always felt like more....
by Ted Chase March 3, 2014 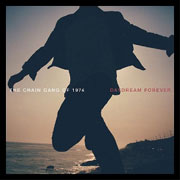 The Chain Gang of 1974 may always be the personal project of Kamtin Mohager (QRO interview), but the “Gang” always felt like more.  There was the reinvention between 2010 debut White Guts and the following year’s follow-up Wayward Fire, and there are their dance sounds, which have been beyond just some guy fiddling with knobs.  Now The Chain Gang goes full-on club anthem and further with Daydream Forever.

Daydream could have been just another dance mix, with big synths and beats – and little else beneath.  Yet Mohager cuts his dance with emotion that works.  Opener “Ordinary Fools” is visceral in its procession, while “Sleepwalking” advances faster than that into the future.  There are even moments of restrained & resigned key tones, such as “Witch” and “Mouth”.  And it closes with the atmospheric reaching out of “Plum”.

Solo projects are often only emotion, singer/songwriter style, or even today’s bedroom chillwave – except for the DJs who pump da beats in da club.  As The Chain Gang of 1974, Kamtin Mohager manages to do both.