Music fans know the obvious with The Claypool Lennon Delirium, that they are funky, weird, and rocking, all reasonable adjectives their own right.... 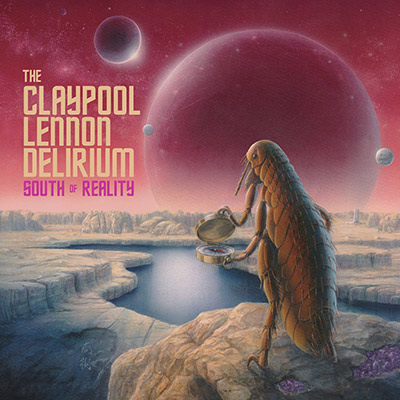 Music fans know the obvious with The Claypool Lennon Delirium, that they are funky, weird, and rocking, all reasonable adjectives their own right. However, any fan of the thumping satire in Primus knows the Primus and Sean Lennon side-project is not just funky, and any fan of the charming Lennon knows it is not just rock either.

In some kind of cosmic channeling of a post-Beatles depression, The Claypool Lennon Delirium rides a fine line of psychedelic intoxication and serious music. After all, that is what their people want. For everybody else, past songs like “Cricket and the Genie Movement I, The Delirium, Movement II, Too the Moon” took music to a place where it was both happy and sad. This is exactly where South of Reality picks up, with single “Blood and Rockets Movement I, Saga of Jack Parsons”, a piece so catchy and so weird, it brings makes one pause and wonder who Jack Parsons is (a rocket engineer).

Where the opener “Little Fishes”, actually takes us further from the first album to more Lime and Limpid cover EP territory, and is really a pretty solid rock track anyways, but with “South of Reality” we are right back at it, classic Claypool Lennon on a psychedelic trip, if there ever was one. Perhaps even better is “Toady Man’s Hour”, which is a steady bass line following a quirky story as usual. “Cricket Chronicles Revisited, Part I, Ask Your Doctor, Part 2, Psyde Effects” is the most overly drawn out. This is very much like previous psychedelic releases, still, a little too self-involved, unsurprisingly, as the drama only holds through the keyboard, bass, or at most a short guitar solo. At times they rely too much on crazy stories to carry a musically repetitive song about a doctor here or in the past a Death of a Salesman parody, see “Breath of a Salesman”, or whatever the extended solo in “Mr. Wright” does.

Rather than the solely jam band theme they could inadvertently have created by being uniquely repetitive, they are generally uniquely psychedelic, and a psychedelic jam band is always a good start. Whether loud rock or inspired pop, if “Amethyst Realm” and aforementioned “Blood and Rockets” are any indication, they are in fact better for the psychedelic weirdness, and the more pop, less pure rock rhythms, yes, even weirder for Lennon Claypool on the second LP.

In fact, every song on South of Reality has something going for it despite the excess in a couple, “Easily Charmed by Fools” is another solid single, and it all ends perfectly in “Like Fleas”, a rollickingly almost Beach Boys meets the Beatles joyous psych trip, which still pounds the bass. South of Reality is yes, like previous albums, but even more out there, trippy, happy, sad, and just atmospheric.