Overall, it is clear that The Decemberists still have something to say.... 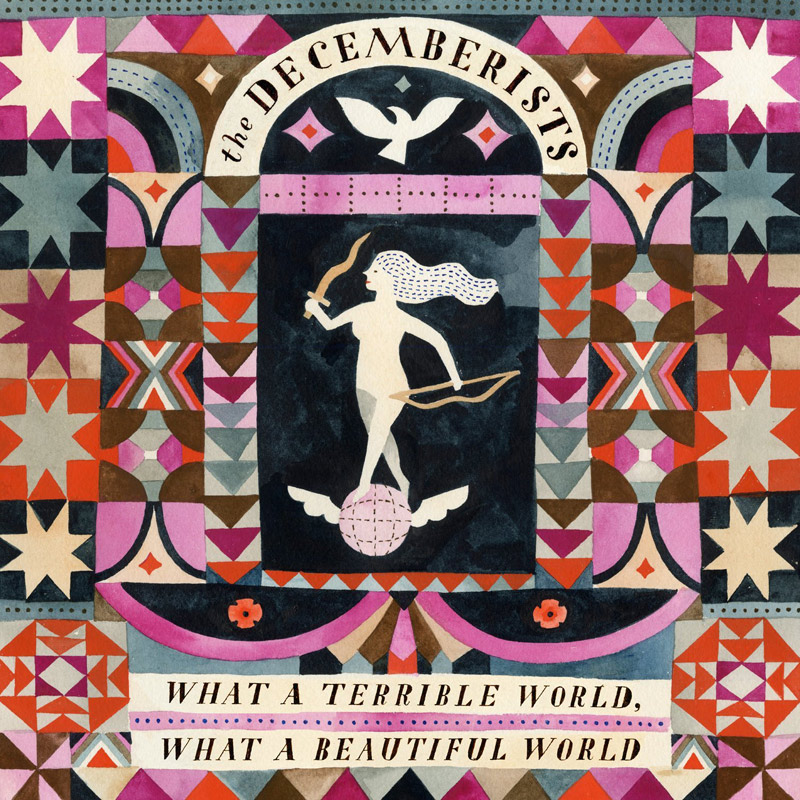 “We had to change some, you know, to belong to you,” Decemberists lead singer Colin Meloy croons over a sparse-sounding soundscape on the opening song of his band’s first album in four years. And change would be an appropriate way to look at these Portlanders’ career from their first album until now, the release of their latest effort, What a Terrible World, What a Beautiful World.

The band has returned to working with Tucker Martine, with whom they began collaborating on 2006’s The Crane Wife. Sometimes when a band works with the same producer for years on end it can make it so that they end up churning out the same recycled album over and over again. Not so with The Decemberists. Sure, it’s easy to see that What a Terrible World, What a Beautiful World continues and builds upon some of the musical themes explored on their last album, 2011’s The King Is Dead (QRO review), but this record is even more of a straight ahead effort bordering on the rock end of the spectrum than the latter. It stands out as no-nonsense and should be considered the group’s most accessible release to date.

Click here for photos of The Decemberists at 2016 80/35 Festival in Des Moines, IA in the QRO Concert Photo Gallery

Click here for photos of The Decemberists at 2016 Shaky Knees in Atlanta, GA in the QRO Concert Photo Gallery

Click here for photos of The Decemberists at 2015 Austin City Limits Music Festival in Austin, TX in the QRO Concert Photo Gallery

Click here for photos of The Decemberists at Greek Theatre in Berkeley, CA on May 1st, 2015 in the QRO Concert Photo Gallery

Click here for photos of The Decemberists at 2014 Boston Calling in Boston, MA in the QRO Concert Photo Gallery

Click here for photos of The Decemberists at Music Fest NW 2010 in Portland, OR in the QRO Concert Photo Gallery

With regard to overarching themes, the body of work deals with the juxtaposition of the ugliness and beauty in the world around us. For instance, the album’s title draws it’s inspiration from President Obama’s speech in response to the Sandy Hook Elementary School shooting in 2012. Lead singer Colin Meloy was dealing with personal turmoil in his feelings towards and response to such an event while at the same time experiencing such a happy personal life. It is something to which many of us can relate. Sure, there is ugliness around us almost every day, but quite honestly, things can simultaneously be going quite well for us in our family and work lives. The trick is to know how to balance an awareness of an appropriate awareness of and response to the world’s problems, while at the same time giving you permission to be personally happy. This theme is explored in more depth on the song “12/17/12”.

Without a doubt, the best song on the album is its closer, “A Beginning Song”. It has an intriguing balance of sentimental and catchy elements to it. When listened to in succession with “12/17/12” it will give listeners some appropriate perspective with regard to the themes of the previous song and how we as humans should respond to life’s tragedies moving forward.

Overall, it is clear that The Decemberists still have something to say. Yes, Colin Meloy’s voice can get tiresome at times, but it is easier than ever to overlook that with this album than with any other. What a Terrible World, What a Beautiful World is an album that will keep dedicated fans very happy as well as welcome many new ones into the fold.