The Districts could have been just another twenty-first century indie-rock band.... 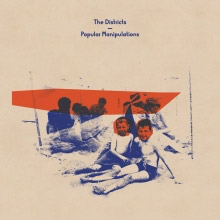 The Districts could have been just another twenty-first century indie-rock band, that burble up from wherever, have a buzz hit or two, and then fade back to wherever as the members have to grow up and get real jobs. But with Popular Manipulations, the Lititz, PA group takes a big step forward into something more.

Click here for photos of The Districts at 2017 Lollapalooza in Chicago, IL in the QRO Concert Photo Gallery

Click here for photos of The Districts at SXSW 2017 in Austin, TX in the QRO Concert Photo Gallery

Click here for photos of The Districts at 2014 Boston Calling in Boston, MA in the QRO Concert Photo Gallery

That “something more” is largely emotion, but delivered far more effectively than, say, emo. The first half of Popular has a proceeding emotional rock power in pieces such as the opening one-two-three of “If Before I Wake”, “Violet”, and “Ordinary Day”. But then the record moves to a rather ominous wobble, shaky and reverbing, to nicely change the story on “Fat Kiddo”, “Capable”, “Rattling of the Heart”, and “Will You Please Be Quiet Please?” to close.

Popular Manipulations doesn’t have that popular buzz hit that’ll make The Districts known wide for a second, but does have some strong songs that’ll keep them around for more than a second.