The Flaming Lips have done some zany things throughout their long career.... 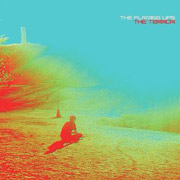 The Flaming Lips have done some zany things throughout their long career.  They released Zaireeka in 1997, which was a four-disc eight-song album with a stereo track on each disc and was designed to be played simultaneously.  Then in 2011 they released a series of “extra super special limited edition” releases in the form of USB drives embedded within various forms of gummy candy.  One was a fetus, another was a skull… you get the idea.  Not to mention the 24-hour-long song they also released that year.  Yes, you read that right.  They released a single song that clocks in at 24 hours and it was released in a USB drive shaped like a human skull.  Thinking about how they went about recording that is either genius or just plain scary.  To be a hardcore fan of this band and be able to keep up on all that they do is to have no life.

Regardless, if it’s wild and wacky, The Flaming Lips have done and will do it, which is why their latest album, The Terror, actually comes as a bit of a surprise.  It seems fairly normal by their standards.  It’s their first ‘official’ studio album in four years, the last having been 2009’s double album Embryonic (QRO review).  They definitely stayed busy during that four year period though, releasing two collaborative albums – 2009’s The Flaming Lips and Stardeath and the White Dwarfs With Henry Rollins and Peaches Doing The Dark Side of the Moon (wow) and 2012’s The Flaming Lips and Heady Fwends, which featured collaborations with the likes of Ke$ha, Bon Iver, Jim James, and Plastic Ono Band, to name a few.

The Terror is a relatively concise collection of nine songs, save for the 13-minute-plus track “You Lust”.  It just drones on and on in a seemingly endless web of weird tones and repetitive lyrics as well as chord progressions.  Quite honestly, it’s the one thing holding this album back.  However, it is The Flaming Lips we’re dealing with here, so antics such as this are to be expected.

Make no mistake, the music of The Flaming Lips has always been odd, but every proper studio release prior to Embryonic had a bit more of a catchy mainstream feel to it.  The trend they began with Embryonic definitely continues on with The Terror.  It presents what feels like a more subdued, almost downtrodden, Flaming Lips.  It is very obscure-sounding music, indeed.  It might be what you would expect to hear playing when you walk into a hole-in-the-wall record store somewhere (see the album’s opener, “Look… The Sun Rising”).  It’s hard to say that with The Terror they are pushing the envelope with accessibility and obscurity because – in a nutshell – that is really the essence of The Flaming Lips.

The official recommendation is definitely to check out The Terror.  In the first couple of listens it will probably come off as annoying, but if you power through that it will start to grow on you around the fifth or sixth time through.

Endnote: you can listen to The Flaming Lips’ 24 hour song, “7 Skies H3”, at flaminglipstwentyfourhoursong.com.  Good luck with that.

The Flaming Lips – Look... The Sun Is Rising