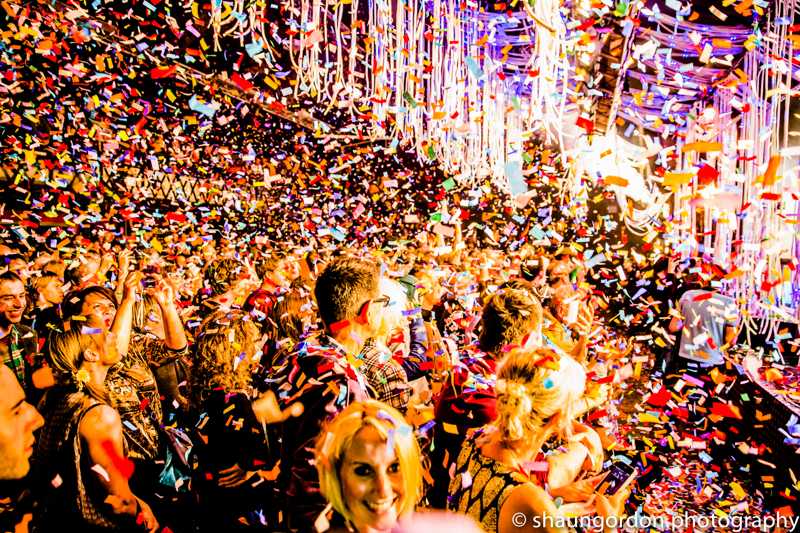 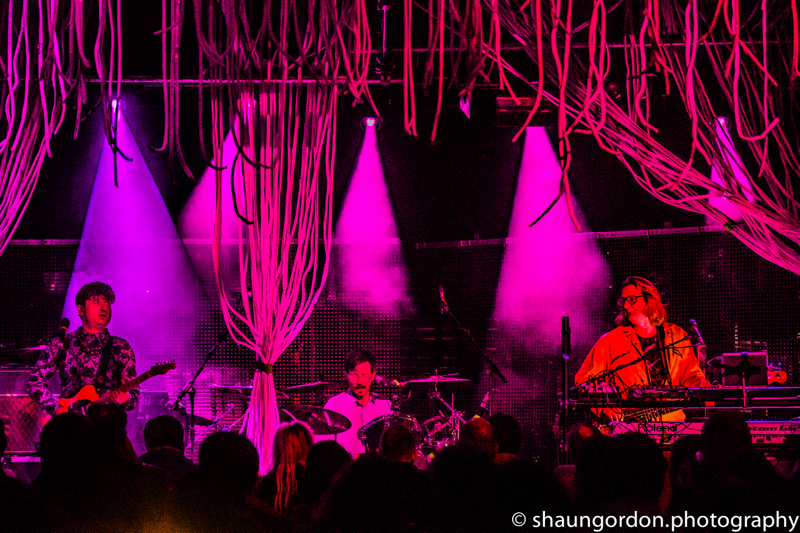 When Young Knives signed-up to support The Flaming Lips at Nottingham’s Capital FM Arena show on Thursday, May 29th, they probably had higher expectations than to walk out to a Rock City crowd stretching only a handful of rows back: the consequence of an early set-time (7pm) and, it seems, an overestimation of the East Midlands uptake for the Oklahoman band. 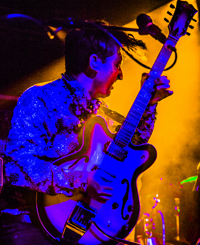 Nonetheless, a reasonable audience soon developed and the Knives produced a set that appropriately wetted the appetite for the headliners to follow. From the start it was clear that the support shared the Lips’ taste in eccentricity, with bassist Thomas ‘House of Lords’ Dartnall sporting a ludicrous pink spherical mask (soon dispatched with) and orange boiler suit resembling that of Breaking Bad’s Walter White.

With dense electronics and bass, the Leicestershire trio at times sounded far removed from the post-punk revivalism of template description. Frontman Henry Dartnell acknowledged himself: “We used to be like the Kaiser Chiefs, now we’re nothing like them.” The mild murmurs of approval suggested it to be a welcome career move.

The intensity took a turn in an Amazing Snakeheads kind of direction as Dartnell unleashed an impassioned diatribe involving, amongst much else, insightful commentary such as, “Suffocating in your own shit!” and, “Come over here and kiss me on my fucking mouth!” A bit post-watershed for an early evening set, but the crowd cheered even as the frontman went all-out ego on the final track by attaching an impressive pair of black wings (match that Wayne Coyne). It was the kind of showmanship that could have been met with an unimpressed gaze by a sterner audience, but Flaming Lips fans are clearly a fun-loving bunch. 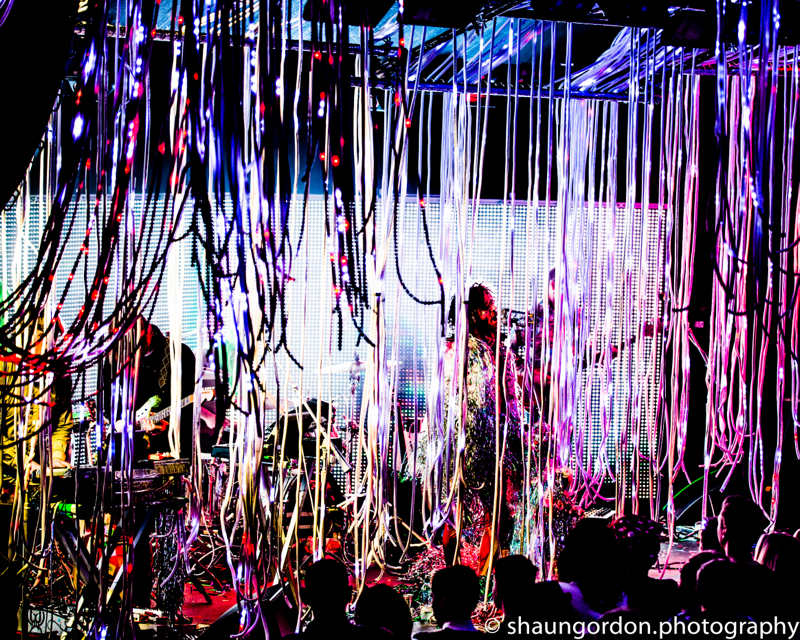 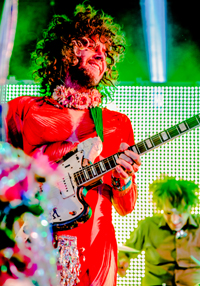 It was this attitude that gave the Flaming Lips’ performance its own sense of positive collectivism. After a somewhat anti-climactic ascent to the stage, in which Coyne (QRO interview) and co. appeared to be sound-checking, the band opened up with “The Abandoned Hospital Ship”; a song that – with its gradual, but euphoric, build-up – could have easily served a role as the set closer.

Following this were a string of favourites, unleashed confetti cannons, and the illumination of a curtain of spaghetti-shaped neon lights hanging across the stage (which no doubt provided Rock City with the most impressive light show it will see this year). Indeed, with Spiderman-esque chest padding, plastic doll in arms, and torchlight in hand, it was probably only Rock City’s low ceiling that prevented Wayne Coyne from deploying the trademark crowd-surfing hamster ball. 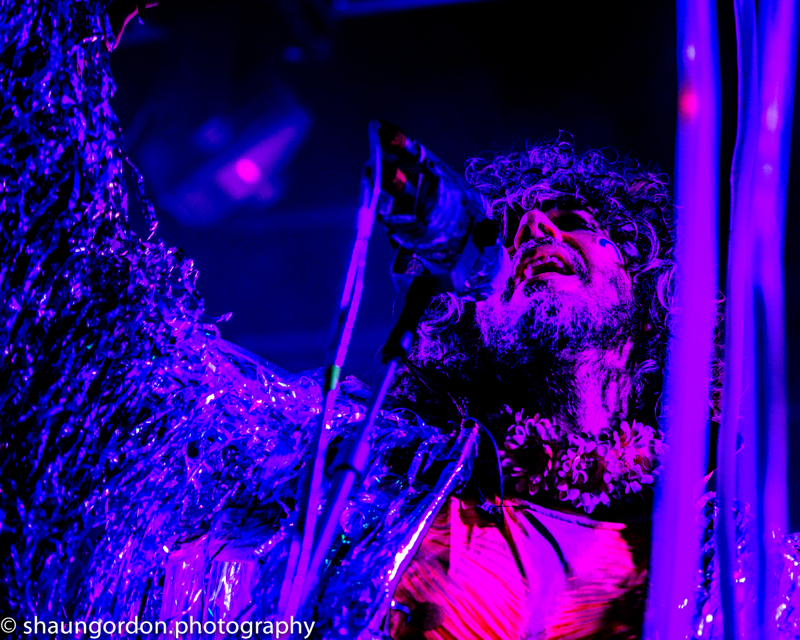 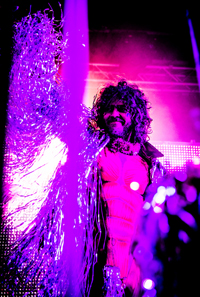 Beside their visual impact, however, the appeal of the Flaming Lips is how they conjure up a range of different musical influences. The lyrical absurdity of “She Don’t Use Jelly” could have sat comfortably in a collection of noughties pop-punk, while the groovy bass and haunting electronics on “Look… The Sun Is Rising”, from last year’s The Terror (QRO review), suggested the influence of later-Radiohead. 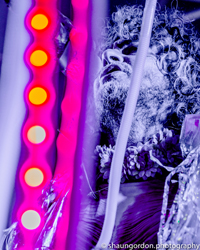 “Yoshimi Battles the Pink Robots”, “Waitin’ for a Superman” and the penultimate “Do You Realize?” provided melancholic sing-alongs, while the downbeat almost trance of “In the Morning of the Magicians”, the dreamy atmosphere of “Feeling Yourself Disintegrate”, and a buoyant “Race for the Prize” made a particular impact.

The Lips bowed out with a nod to their foremost influence with “Lucy In The Sky With Diamonds” (minus Miley Cyrus, this time). Expect it to be on the forthcoming Beatles tribute album With A Little Help From My Fwends; the kind of endeavour most would shudder at the thought of, but one that seems like a totally Flaming Lips thing to do. In all, the greatest compliment to pay is that, although this billing ultimately failed to be a stadium-sized one, both bands delivered as if it was.