There’s something very apposite about The Fratellis’ logo.... 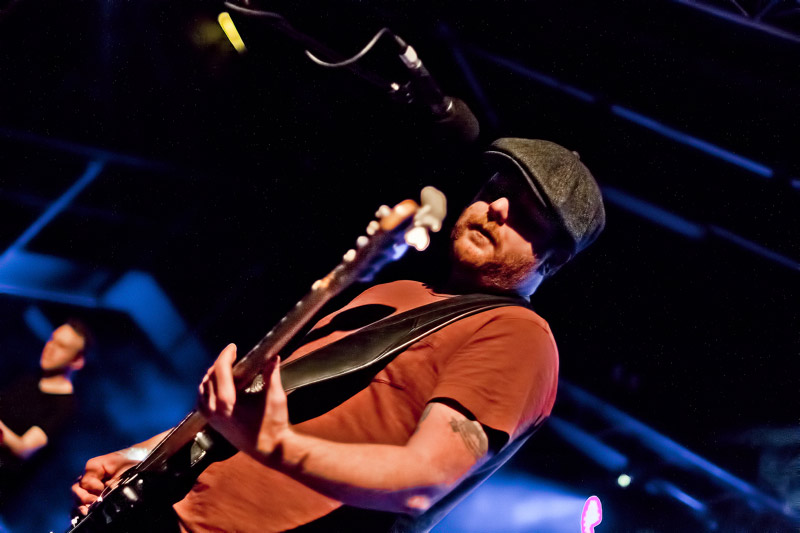 Click here for photos of The Fratellis at Zebedee’s Yard in Hull, U.K. on August 11th, 2017 in the QRO Concert Photo Gallery

Click here for photos of The Fratellis at Webster Hall in New York, NY on September 18th, 2015 in the QRO Concert Photo Gallery

Click here for photos of The Fratellis at 2013 Bingley Music Live in Bradford, U.K. in the QRO Concert Photo Gallery

There’s something very apposite about The Fratellis’ logo.  It’s nothing too fancy – just their name with the definite article spelled out in a smaller size above the rest.  They’ve used it on album covers, on merch, on the drum kit since they started out in 2006.  I spent some time admiring it from the pit while waiting for the gig to kick off at the Engine Shed in Lincoln on Monday, November 18th, and it’s the choice of typeface that’s most interesting.  It looks like a variant of Cooper and it suits them down to the ground.  It’s not a trivial font – it’s got some weight to it, but it’s not serious either – it’s got curves that make you smile (which is true of pretty much everything on Fratellis’ album art).  Despite having been around since the early ‘20s, Cooper has a timeless pop art whimsy to it – hence its use on both the Pet Sounds album cover and on the Doors’ L.A. Woman (as well as branding for Kickers, Spacehoppers and Easy Jet).  And timeless pop whimsy is something The Fratellis do very well indeed.

I’d seen them at a festival in the summer when they had failed to make a big impact (QRO festival coverage), just four guys looking a bit lost on a very big stage in a field with a crowd that weren’t really warmed up yet but in the more intimate setting of The Engine Shed they delivered a fine high-energy show.  Although it’s conventional to tag The Fratellis as ‘indie’ or ‘rock’ or ‘indie-rock’, what they delivered on the night was a potent shot of high quality pop, featuring plenty of songs about relationships between strippers and drunks, full of ironic observation, good humour and songwriting excellence – danceable verses and sing-along choruses that place them in the tradition of British pop writing that includes people as diverse as David Bowie, Ray Davies and Guy Chambers.

Kicking off with “This Old Ghost Town” and “Henrietta”, the set took in favourites from their first album, 2006’s Costello Music, and the new one We Need Medicine, with not much attention paid to the one in the middle other than a nice up-tempo “Baby Doll”.  The crowd seemed to prefer the older and better-known stuff, but there was plenty to enjoy from the newer and less famous tunes, including a fantastic hootenanny gospel stomp “We Need Medicine”, another up-tempo number in “Jeannie Nitro”, and the bluesy “Doginabag”. 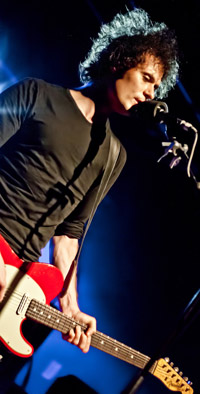 That said, the highlights of the night were still the songs that everybody knows – I defy anybody not to sing along to “Whistle For the Choir” – and possibly The Fratellis are the victims of their own success on this score.  There aren’t many songs out there that several hundred people can sing spontaneously as a chorus, but when the band left the stage at the end of their main set the chant of, “Dah dah dah” began and lasted until they returned.

Was the band pleased about this?  It was hard to be sure, although obviously they weren’t surprised.  The royalties must be nice, but with such an array of good material it may be dispiriting to have your other work overshadowed by a monster.

“Here’s an old song that your parents, even your grandparents will know,” said Jon Fratelli, drawing a big anticipatory cheer before defying expectations by leading a rousing version of “Runaround Sue”.  When “Chelsea Dagger”, finally arrived the crowd went predictably wild, but The Fratellis themselves seemed a little disengaged – certainly they undersold the song but the crowd didn’t seem to care, and everybody left happy with not a few still singing and punching the air as we made our way out into the night.