The Gaslight Anthem came to John Varvatos Bowery, ex-CBGB's, to debut their upcoming 'Get Hurt'.... 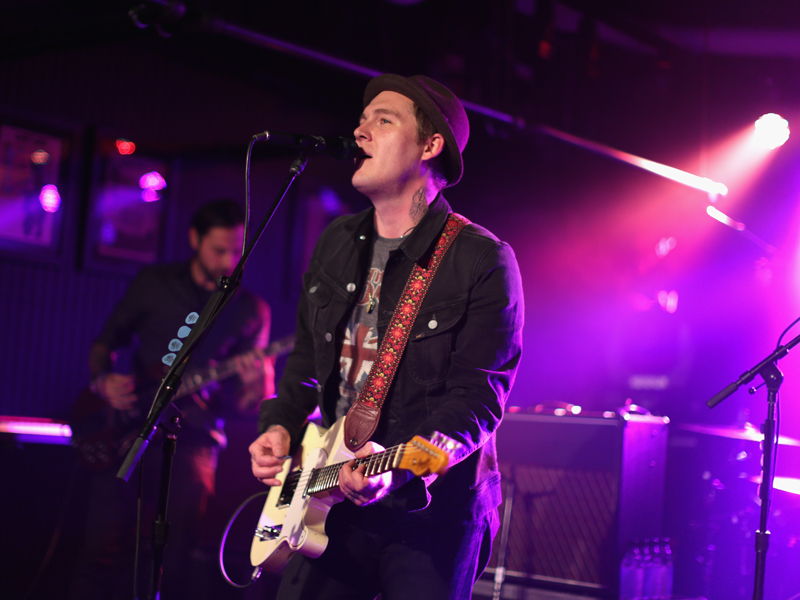 Click here for photos of The Gaslight Anthem at 2013 Osheaga Music Festival in Montreal, PQ, Canada in the QRO Concert Photo Gallery

Click here for QRO’s review of The Gaslight Anthem at Irving Plaza in New York, NY on July 27th, 2013

Ever since CBGB’s closed in 2006, and its 315 Bowery space replaced with a John Varvatos boutique, people have been of two minds about the place. ‘CBGB’s was a legendary place that should still be here!’ ‘CBGB’s was a dump that hasn’t been relevant since the early eighties, or at best the mid nineties!’ ‘John Varvatos is buying out & trampling on the spirit of punk rock!’ ‘John Varvatos throws intimate shows by big bands for free (with free drinks)!’ ‘The only people who get in are VIP fashionistas!’ ‘Bands can get fans in for super-intimate show!’ And so on… 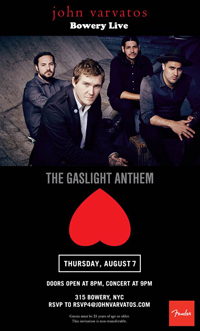 The Gaslight Anthem came to 315 Bowery for a special show on Thursday, August 7th that had all of the above in spades – and, most importantly, the live debut of their eagerly anticipated new album, Get Hurt.

A wide line stretched around the block before doors opened at 8:00 PM at John Varvatos Bowery. Shows at John Varvatos can’t really be called ‘secret shows’, since, while they no longer directly advertise upcoming events on their window, still put together a poster, the band gives away tickets on their website, and every unofficial show leaks these days (looking at you, www.myfreeconcert.com…). Varvatos Bowery does keep something of a lid on attendance by sending confirmations to RSVP e-mails, and limiting those confirmations depending on interest – and this was a high-interest show. 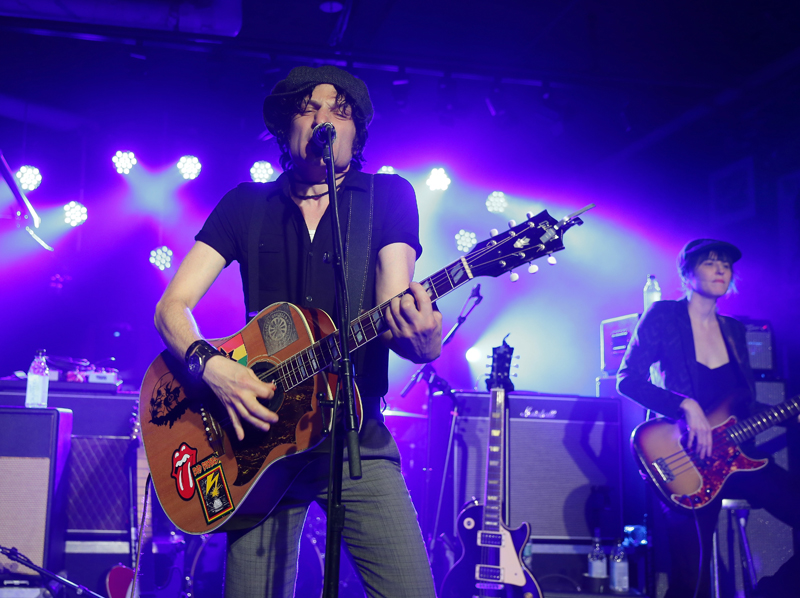 Before The Gaslight Anthem came on, Lower East Side regular Jesse Malin opened up the evening (with a band that included ultra-utility player Catherine Popper – Puss N Boots, Mike Doughty, Joseph Arthur & The Lonely Astronauts, Grace Potter & The Nocturnals, Ryan Adams & The Cardinals – on bass). This was a better-kept secret, and certainly some of the people who had clustered in the already-tight front were bummed that GA weren’t coming on quite yet, but Malin has his own rock following that overlaps with the headliners – and comes from even closer than the New Brunswick (that’s Jersey, folks) Anthem. He had even headed his own show at John Varvatos earlier this year, and has been a musician long enough to have actually played CBGB’s. Malin played mostly off of his own upcoming PledgeMusic-funded album, You Know It’s Dark When Atheists Start To Pray, though also threw in one classic from 315 Bowery’s old days, “Do You Remember Rock ‘n’ Roll Radio?” by The Ramones (R.I.P., Tommy Ramone) – not just an apt choice of band to cover, but also of song. 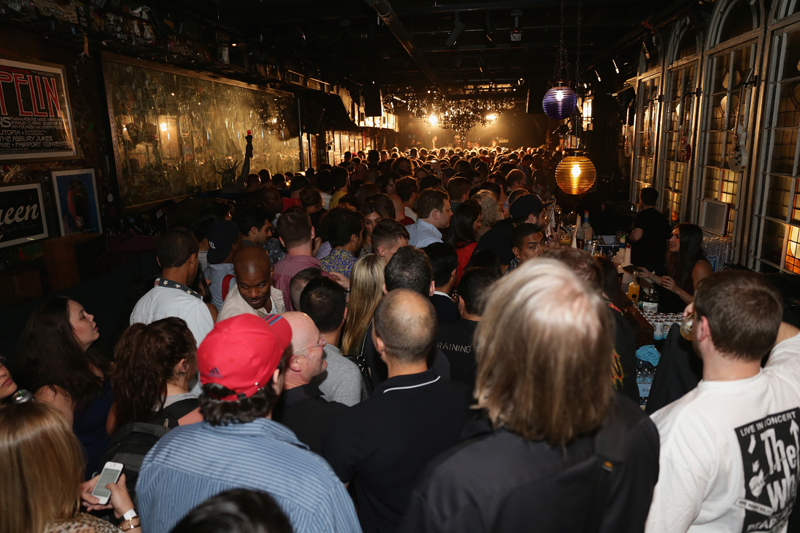 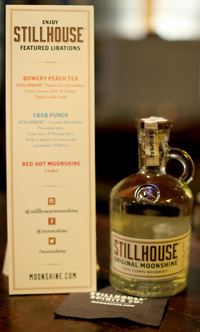 By the time Malin was playing, John Varvatos had gotten packed. Packed. The space has had its problems in actually ‘seeing’ shows for decades & decades, being long and thin with only a foot-high stage. Add into that a bar on one side and soundboard on the other midway between the stage and the entrance on the other end, and it creates a huge bottleneck – it was nigh impossible to even go back, away from the stage, to get a beer. That beer was cans, not bottles – until staff started serving it in cups that only held like half a beer. Clearly a late order from management, it didn’t stop the beer from completely running out before The Gaslight Anthem even started – and later even the special pre-mixed drinks ran out (though they were still mixing Stillhouse Moonshine & soda water drinks up until closing, thank you very much). 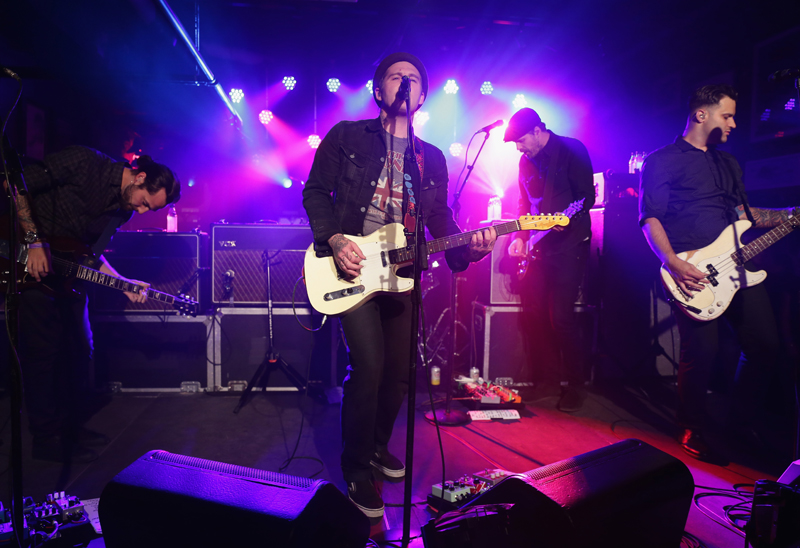 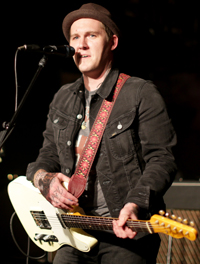 In a couple of weeks The Gaslight Anthem release Get Hurt, and head on a tour of massive venues like the PNC Bank Arts Center in their native New Jersey on September 13th. So this gig was a bit of a ‘warm-up’ as much as a ‘debut’, playing eleven of Hurt’s twelve songs (only missing “Break Your Heart” – but including deluxe edition bonus track “Sweet Morphine”), with ten of those (plus “Morphine”) being played live for the first time ever. This did create a bit of an up-down experience, as the crowd loved the songs they knew like new Hurt single (and the one song from it that the band had previously played live) “Rollin’ and Tumblin’” or the only two non-Hurt Anthem pieces, singles “The ’59 Sound” and “Great Expectations”, plus unexpected cover of Ashley & Foster’s “The House of the Rising Sun”, but obviously didn’t know the rest of the material (and no “45” or “Handwritten” from their last record, Handwritten – QRO review – but that’s the fate of the last album when you’re touring the newest album…). 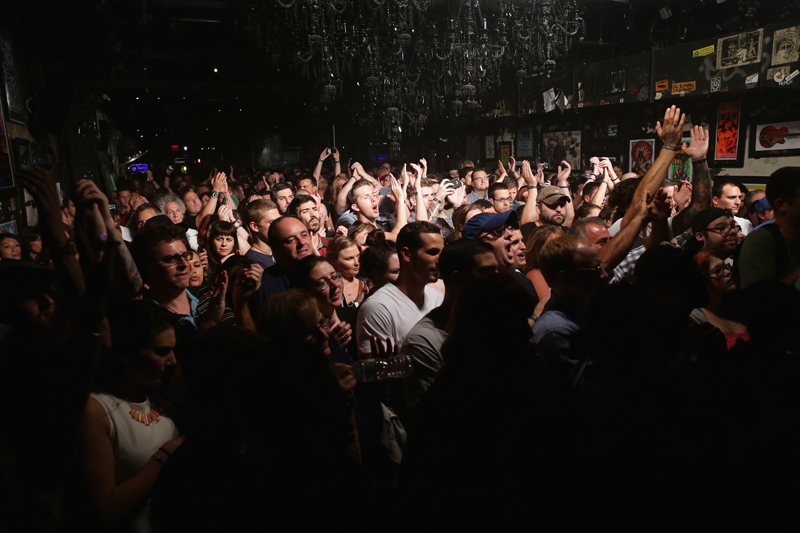 And the crowd was roughly divided between big Gaslight fans up front, and VIPs in the back (seen in both sections was Jon Spencer, of Jon Spencer Blues Explosion – QRO live review). It wasn’t that divided, though, as the place was at capacity, with people lined up outside (special thanks for getting this correspondent’s late-arriving plus-one in). It was a little confusing as to how they could tell when someone had left, as the only bathrooms were port-a-potties outside (there are bathrooms in John Varvatos – probably – but way behind the stage). Though those are still cleaner than the ones at CBGB’s…

The Gaslight Anthem’s John Varvatos Bowery show was unlike any you’ll see them play when they tour Get Hurt, or even any that they’ve done previously, even special ones like last year’s Red Bull SoundSelect performance at nearby Irving Plaza (QRO review). It was a chance to catch a big band playing an intimate show, for free with free drinks – and if everything didn’t go quite smoothly, it’s still a lot smoother than any night ever at CBGB’s. 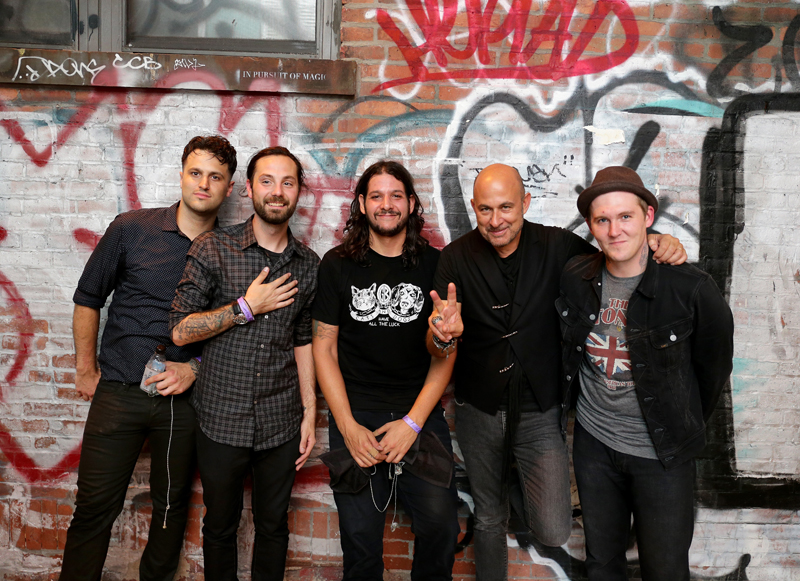