The Gaslight Anthem may have made it to the big-time in terms of their venues, but still have the intimate, well-worn feel of a personal favorite.... 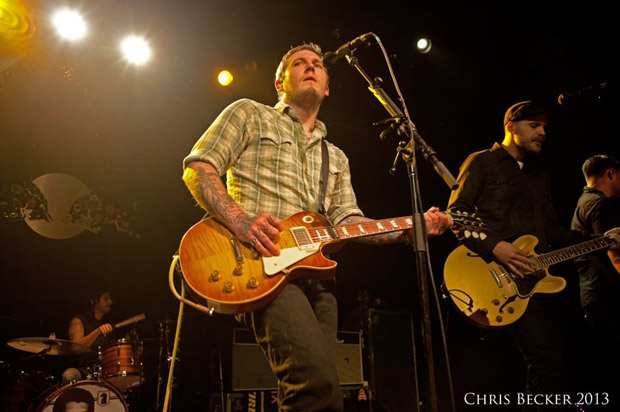 Click here for photos of The Gaslight Anthem at six days later at Osheaga Music Festival in Montreal, PQ, Canada in the QRO Concert Photo Gallery

Early on in their set at Irving Plaza on Saturday, July 27th, Gaslight Anthem frontman Brian Fallon joked about how he used to think that the New York venue (QRO venue review) was the biggest place in the world – but now he knows that there’s only one bathroom.  The comment was a funny one (and Fallon went on to talk about when one needs to pee – which prompted a number of fans to need to hit the lone restroom – and said maybe the cause of Axl Rose’s stage problems is just that he needs to pee), but it was actually underlining a broader point – how big they’ve gotten, how the venues they used to consider huge are now too small for them.

The Gaslight Anthem were in the middle of a three-night stretch in the Big Apple, with dates at the new, and much larger, Pier 26 on both Friday & Sunday.  The only reason they were playing the ‘small’ Irving was that the show was part of ‘Red Bull SoundSelect’, a series of shows across the country over that weekend (like The Dandy Warhols in Austin – QRO photos), each free with RSVP.  The New York show was maybe the largest of them all, with the New Jersey locals playing close to home and even picking the openers, Dave Hause (QRO photos), The Scandals (QRO photos), and France & The Foundation (QRO photos).  There was a definite line before doors opened, despite that it would still be nearly four hours until Gaslight took the stage.  But if a band can book two shows at a large outdoor venue, surely they could pack the smaller Irving for free – all that mattered was how many people Red Bull allowed to RSVP (everyone there did get a “#SOUNDSELECT” wristband, just in case they forgot who’d made the whole thing possible).

The set list was naturally dominated by songs from their latest album, last year’s Handwritten (QRO review), with the night starting on that record’s title track – followed by the title track from 2008’s ’59 Sound.  Those two plus “The Diamond Church Street Choir” from 2010’s American Slang (QRO review) formed a very strong one-two-three to open the night (in front of an also-packed photo pit), and came right before Fallon’s speech about Irving, peeing, and Axl Rose (who Fallon said he no longer has a problem with, unlike what he said at their last small, sponsored NYC show last year – QRO review).  And after doing American Slang’s own title track (with Hause joining in on back-up vocals), Fallon again talked to the crowd about concerts – this time about singing along, whether it is better to sing with the singer all through, or to have the singer sing the first part alone, and then the crowd sings the second part alone.  Fallon even tried out the latter style with pieces from Lady Gaga to Bone Thugs n’ Harmony – though told one fan who shouted a request that he can’t pick the song because, “You’re name’s not on the ticket…” 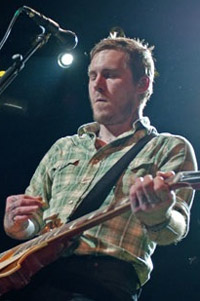 After all the ‘new style’ singing along (and there was plenty of the ‘old style’ throughout the evening), the back half of the set started with an excellent version of Handwritten’s “Howl”.  Handwritten would particularly dominate the second part of the show (including the four-song encore), but interestingly both the song going into the encore break and the final song of the evening were from ’59 Sound – “Great Expectations” into the break, and “The Backseat” into the night.  Of course, the band really couldn’t make a wrong choice for the crowd, even pulling out Handwritten b-side “Blue Dahlia” and a hard-hitting “1930” from 2007 debut Sink or Swim.  The Gaslight Anthem may have made it to the big-time in terms of their venues, but still have the intimate, well-worn feel of a personal favorite. 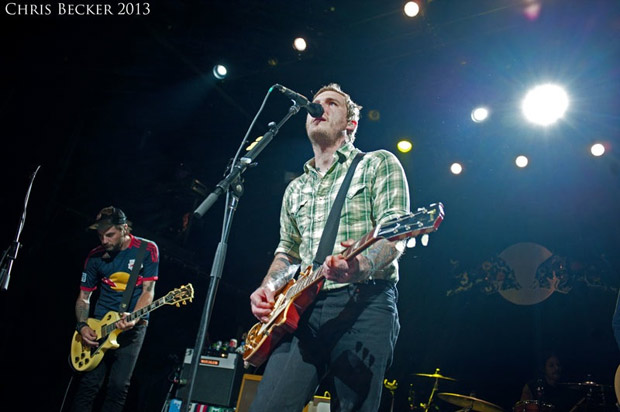