The Glitch Mob are an undeniable force in the electronic music community.... 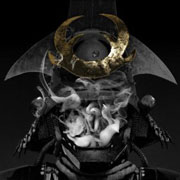 The Glitch Mob are an undeniable force in the electronic music community.  Their music has always been interesting in that it doesn’t just make one want to dance or bob his head, but it actually seems to tell a story.  It’s probably no coincidence that some of their songs have been so widely used in movie trailers.  They have that inherent cinematic quality.

That said, their first album in four years, Love Death Immortality, is notably less cinematic than 2010’s Drink the Sea in that it incorporates more dubstep and traditional EDM elements.  For an example of this, see the build up which occurs at the 3:16 mark of the song “Skullclub”.  It’s hard to come across as very original when you have elements like this in your songs.

A big difference between Drink the Sea and Love Death Immortality is the use of vocals.  Half of the album features guest vocals this time around.  Two of the more memorable ones feature the talents of Aja Volkman, the wife of Imagine Dragons’ lead singer Dan Reynolds and lead singer of the band Nico Vega (QRO live review).  The two tracks are the extremely catchy “Our Demons” and the intense “I Need My Memory Back”.  Both are proof that when the instrumentals of The Glitch Mob are paired with the right vocalist, their music can be taken to new levels.

Fans of this group will most likely enjoy this album.  But for folks who either don’t know about The Glitch Mob or are on the fence about them, they might come out on the other side of Love Death Immortality a bit tired and looking for an album with more dynamics.

The Glitch Mob – Our Demons