Eighties night in Zebedee’s Yard in Hull with The Human League and Blancmange.... 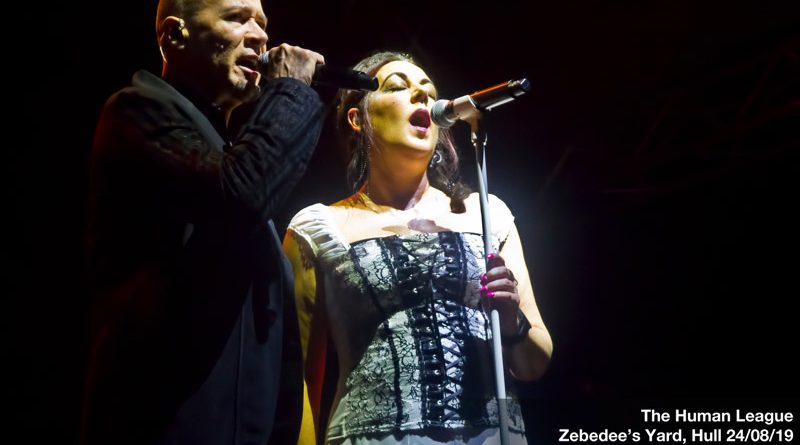 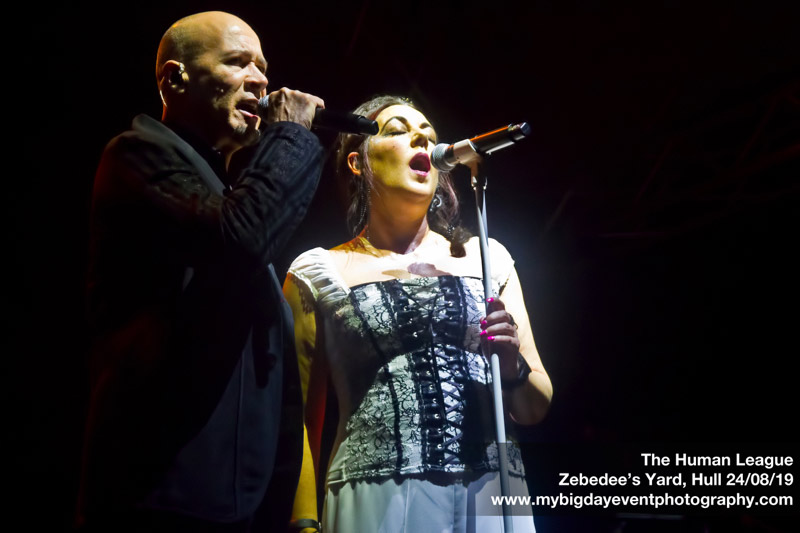 Eighties night in Zebedee’s Yard in Hull, the pop up venue that plays host to Inner City Live, whose three night residency, this time round featuring Doves and Scouting For Girls, makes them more and more like a proper urban festival with every year that passes.  On Saturday night, August 24th, The Human League and Blancmange came to the Yard.

It’s certainly a great place to hold a gig, a car park most of the time, surrounded by the rear facades of Victorian and Georgian warehouses, it’s a tight squeeze, but it creates a little bit of magic and performers seem to love it. Watching The Flaming Lips fill the space with inflatable unicorns, hamster balls and giant balloons a couple of years ago (QRO live review) remains one of the happiest gig going memories I have. 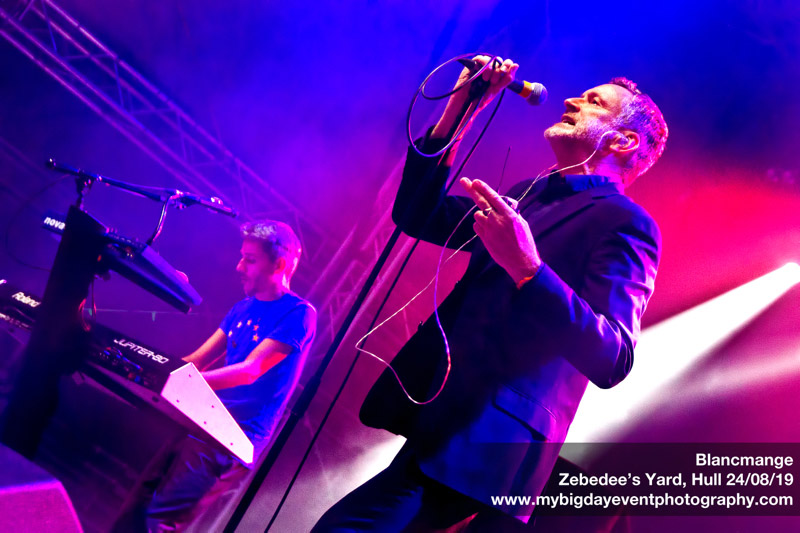 Opening up were Blancmange, and I’d never realized until tonight just how much I like them. The departure of Stephen Luscombe meant that Neil Arthur has taken the Blancmange title on single handedly and with the assistance of session players, and he was in great form on the night, revealing levels of darkness and complexity in songs that I had long ago filed away in the bubblegum synth drawer. 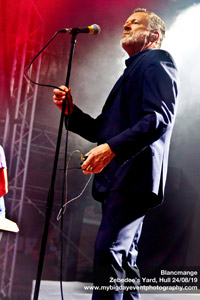 Although the hits, like “The Day Before You Came” and “Living On The Ceiling”, got big welcomes, many of the highlights of the show were drawn from recent albums. Since Luscombe left for the second time in 2011, Arthur has issued a new album most years, and while few have troubled the charts they are full of excellent tracks, darkly brooding and intense and filled with unsettling lyricism. Check out “Last Night I Dreamed I Had a Job” from 2016’s “Commuter 23”, possibly the best song ever written about stacking cardboard boxes, or the question and no answer puzzlement of “What’s the Time” for great little pop songs you missed first time around. And what is the best dog you ever owned? 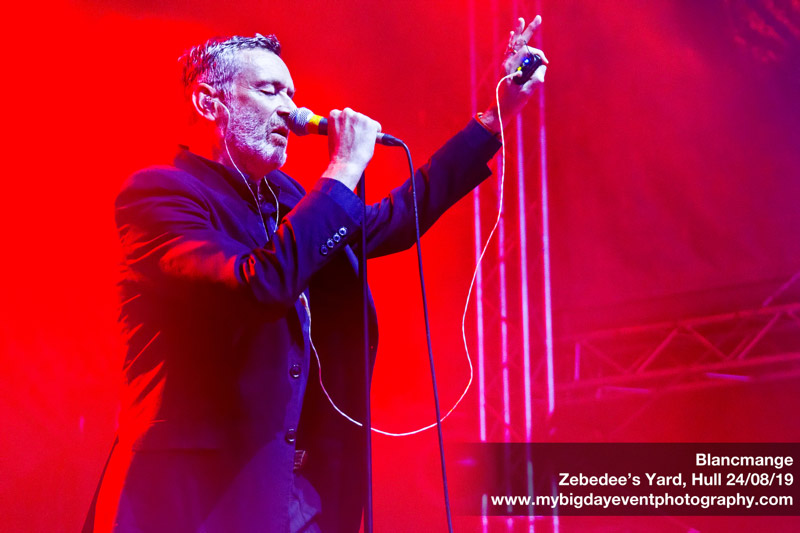 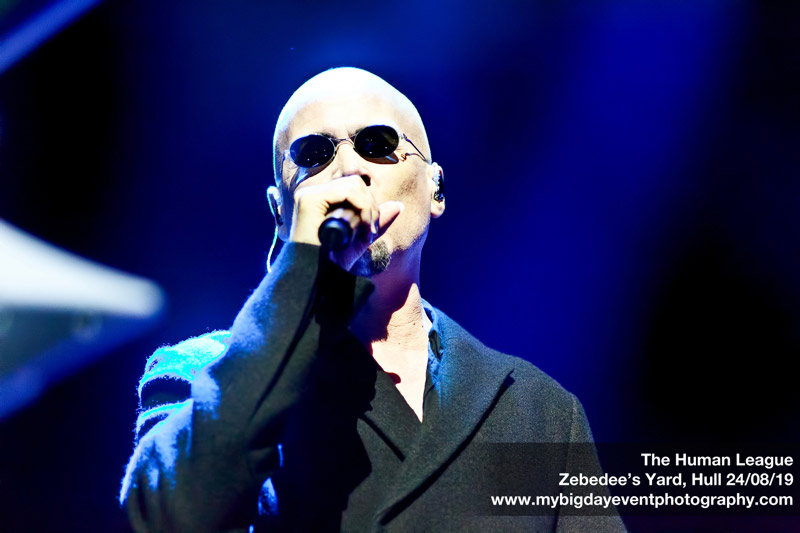 Click here for photos of The Human League at 2013 Bingley Music Live in Bradford, U.K. in the QRO Concert Photo Gallery

The Human League is enjoying a renaissance at present, with their name being checked by the likes of everyone from Madonna to Moby, Pet Shop Boys to Robbie Williams. Now the dubstep generation – notably, the acclaimed Darkstar, who cover the League’s 1982 B-side “You Remind Me Of Gold” on their current album, North – have begun to pay homage to the original sound of Sheffield. La Roux and Little Boots are fans too.

Back in their early heyday, David Bowie called them the sound of the future. Maybe this is when he meant. 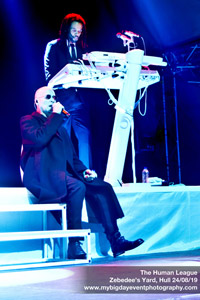 Last time I saw them was at the Bingley Festival four or five years ago (QRO photos) and it was quite a subdued affair, but tonight Phil Oakey was full of energy, running around the stage between Joanne Catherall and Susan Sulley, and climbing the scenery to strike poses with the band. Their set took in the expected hits, including “Mirror Man” and “Don’t You Want Me”, before closing with the Oakey/Moroda classic “Together In Electric Dreams”.

Fantastic stuff and a great night and although that’s the end of this year’s Zebedee’s Yard shows, the promoters have a lot of excellent gigs on the way, including the likes of Lee Scratch Perry and Gary Numan. 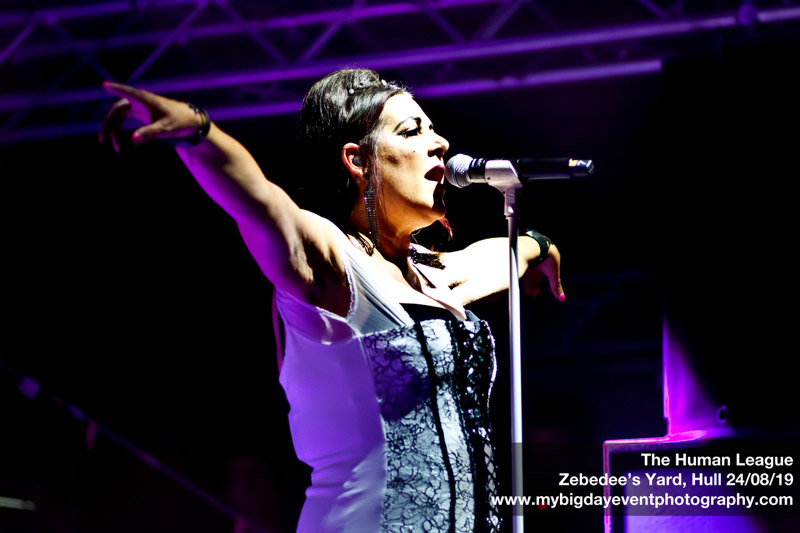