At Riot Fest, The Joy Formidable sat down to talk with QRO.... 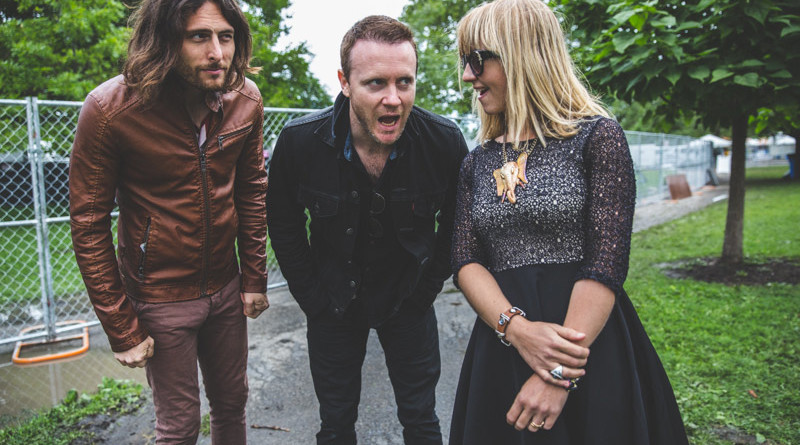 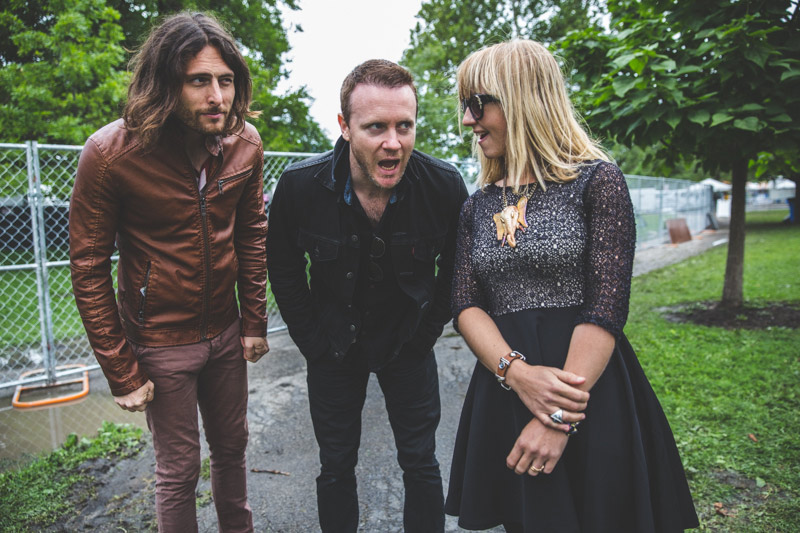 At Riot Fest, The Joy Formidable sat down to talk with QRO. In the conversation, Ritzy Brian (vocals/guitar), Rhydian Dafydd (bass), and Matthew James Thomas (drums) talked about just finishing their upcoming new record, their recent Welsh language Aruthrol collaborations with other Welsh acts, bringing the artwork from a record into 3D on stage, fitting their seven-minute songs into a short festival set, looking down Brian’s Russian doll Alien throat, and more…

QRO: How is this tour going? You seem to be doing a lot of festivals…

Ritzy Brian: This is maybe only the fifth show we’ve done back this year. Up until this point, we haven’t done any shows for twelve months, so we’re excited!

RD: The end of the mixing now.

RB: We finished this weekend.

RD: It’s just great to be doing shows again. We’ve always done so many. So we’re really proud of the record and can’t wait to share with people.

We’ll be doing the odd song, one or two at these festivals, but it’s just good to get out there again. Touring is a big part of it for us, being in the moment…

QRO: But you also just played poolside out on Long Island…

Matthew James Thomas: That was a dump… [laughs]

RB: Such an ugly location, all that seaside scenery and big lake… [laughs]

RD: All that clean air… [laughs]

RB: Do you wanna have a look down?… [laughs]

RD: It looks fucking’ awful – ready for a riot!… [laughs]

MT: It’s not actually Ritzy singing; it’s a little thing inside her mouth, like in Alien…

MT: She’s so full of herself, just like a Russian doll… [laughs]

QRO: You’ve always had some sort of set for the stage when I’ve seen you before – couch & carpet one time, naval theme another. Do you have anything for this tour, or maybe when the next record comes out?

RD: I think maybe more so for the record, yeah. That’s when we tend to do it. I think for festivals, actually it’s quite nice to do it pure & simple, ‘This is who we are.’

RB: We’ve got some lovely banners, though. We worked a little bit with Ralph Steadman recently, a really famous illustrator, did a lot of the Hunter S. Thompson illustrations. He did some artwork for us, did our logo, so we got some nice banners. We’re huge fans of Ralph Steadman, so that was a big, big deal for us.

QRO: What happened to the giant inflatable cat’s head that you used to have come out on stage at the end?

RB: I think he humped it so hard one day, that it burst…

MT: ‘You’re getting in my way!’ ‘You’re hugging the limelight, cat!’

QRO: Are you thinking about the art of the next record, the motif on stage, as well?

RD: Yeah, absolutely. That is an exciting thing for us, actually. We’re very visually orientated, we’ve always done our own videos and artwork, and so if that can – what’s the word? – ‘extend’ to what you’re doing on stage and actually says something that ties in the atmosphere of the album, that’s quite exciting for us.

QRO: The last album had the naval theme on the album and in the show – it was almost like you took the album, and then made it 3D [on stage].

How has the Aruthrol project been, working with other Welsh bands (with Welsh language songs)?

RB: We’ve been doing it in tandem with making the new record, I suppose, but it’s really been a nice diversion, Welsh language songs. And I think to do something collaborative with them, rather than release them just as The Joy Formidable. It was a great thing to open it out, because there’s some great bands, great music coming out of Wales. So to actually have these double-sided vinyls, where you can have a little bit more of a collaborative nature with a band from the area that you really admire.

I think creatively, it’ll be interesting to look back and see the way that the writing has gone from the original to the new record. I think you’ll find those Welsh songs as kind of a bridge between the old record and the new one that we’ve just written.

So we’ve been really busy, been very prolific this last year. There’s been a lot of writing. And it’s good to turn your creative minds to lots of different things: theme tunes, Welsh stuff, the album, the Twin Peaks cover that we just did…

The Joy Formidable’s cover of the Twin Peaks theme song:

QRO: I recently talked with Huw Bunford of Super Furry Animals (QRO interview), who recently re-released their Welsh language album, Mwng, and he mentioned how, after it first came out, it was like people only then thought of the band as Welsh. Have some people only now noticed that you’re Welsh?

RD: Possibly outside of the U.K., I would say.

RB: I don’t like fuckin’ putting things in a box, anyway. I wouldn’t say that we have a particularly Welsh sound – that’s great, I think it’s exciting that you can have an identity that’s Welsh. I’m certainly into doing some more Welsh language stuff. It’s [Daffyd] and I’s first language, so at some point it seemed very, very natural to do something in Welsh.

RD: I think that maybe what surprises people the most, outside of the U.K., when you do something in your native language, ‘Oh, wow – people actually do have this other language.’ Yeah, of course they do. That’s been the exciting thing.

RB: And people have been really excited. We’ve had so many fans who’ve been writing to us in Welsh. I don’t know if they’re reading books or going on Google Translate or something, but it certainly stirred people’s interest. Especially in the States, because you have such heritage, a lot of people have in their family tree have Celtic, so they’re fascinated and wanna know more about the language.

QRO: Do you play any of the Aruthrol songs live?

RB: We have done, but we’ve got quite a short set [at Riot Fest], so it’s really quite hard to decided what to do. Because we’ve got some stuff off old records that we haven’t played before – we hadn’t played “The Leopard and The Lung” off the last record, and we want to play that – we’ve got brand new stuff off the album, then we’ve obviously got all the Aruthrol stuff. I suppose that’s the problem with having the quite big back catalog – ‘What the fuck are we gonna play in forty-five minutes?!?’

And we don’t write many short songs, either. How many seven-minute numbers can you fit in?…

I think obviously when we go on the full-length tour and we’ve got more time, more headline-type stuff, absolutely love to incorporate [Aruthrol]. We have been playing them in the U.K.

QRO: Did you get any state support from the government – I was wondering if Wales, specifically for something in the Welsh language?

RD: They do. There’s a Welsh Arts Council. They’re actually pretty good, on the whole.

I think where we are, in north Wales, I feel like it’d be nice if they pushed that a little bit more. Because the capital is in the south, and naturally maybe some things get pushed a bit more than others, but it’s getting better.

QRO: Have you all moved back to Wales now, after your time in London?

RD: I have, yeah. That’s where we’ve been writing this last record; so we’ve been based there. But no, we’re kind of all scattered at the moment, when we’re not [together].

RB: We make it work…

RD: And we’re with each other most of the time…

RB: The great thing is there’s other people out, though! [laughs] It’s not just these two! Wow, there’s people out there!…

RB: There’s other people we can interact with, instead of just the three of us in a room…

QRO: You talked about set lists – how do you determine them? As you get more music, your sets don’t get that much longer. At something like [Riot Fest], are you just gonna play the singles?

RB: You can be quite spontaneous with it. I don’t like just playing the singles; it kind of depends. You have a good feeling about an audience and a city, and have been there before. And you don’t want to cater to it too much, ‘cause you always wanna push the envelope, you always wanna challenge a little bit, maybe you wanna test some of the stuff on some people.

Ultimately, it’s a selection of songs that feel like they go together, don’t they, and show the breadth of what you’re writing.

RD: We really have got a bit of a back catalog, so it’s nice to mix it up for yourself, as well.