The Juliana Hatfield Three – Whatever, My Love

'Whatever, My Love' nicely revives the alt-nineties.... 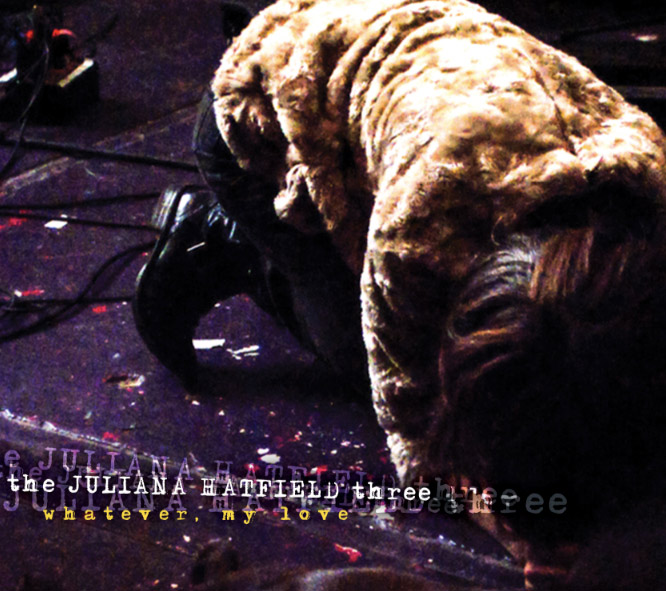 Way back in the early nineties, a whole lot of alternative musicians broke out into success, and one of the most welcome was Juliana Hatfield (QRO interview). After the demise of her band The Blake Babies and a successful independent solo release (not to mention serving as bassist in The Lemonheads for their breakthrough It’s a Shame About Ray), Hatfield had a major splash fronting The Juliana Hatfield Three with Become What You Are, making her one of the leading alt-lady faces out there. Of course that alt-window closed almost as fast as it appeared, and Hatfield’s Three likewise ended after only one album, but now the singer-songwriter has re-recruited bassist Dean Fisher and drummer Todd Philips for Whatever, My Love, which nicely revives the alt-nineties.

Juliana Hatfield has always sung from a girl’s perspective (though her songs weren’t quite as autobiographical as you might have thought – “My Sister” was about an older brother’s girlfriend…), and that continues on Whatever. Opener “Invisible” is about being invisible next to someone (though it could work with that someone being anything from a boyfriend to a sibling), while “I’m Shy” is a nice rockin’ tune about being shy. The jangle-rock numbers like “I’m Shy”, “Push Pin”, and put-a-smile-on-your-face “If Only We Were Dogs” particularly have catch, but there’s also some sweet sadness in songs such as “Invisible”, “If I Could”, and “I Don’t Know What To Do With My Hands”. There are some relatively not as good tracks – “Now That I Have Found You” is too simply cheery, while the processional rhythm behind “Woods” doesn’t work that well (and the guy described in “Ordinary Guy” seems pretty rare & hard to match…) – but it’s what you wanted from a revived Juliana Hatfield Three.

When hearing that The Juliana Hatfield Three was being revived, one could be forgiven for thinking it’s just Hatfield and whoever on bass & drums, but getting back with the original crew does make it special (and unlike, for instance, all of the line-ups Evan Dando puts behind him when he used The Lemonheads name). Whatever, My Love does continue in Hatfield’s solo material (QRO solo album review), but the Three does add something to it.

The Juliana Hatfield Three – If Only We Were Dogs