The Killers turn inward with Pressure Machine, as singer Brandon Flowers details his life growing up in his own small town of Nephi, Utah.... 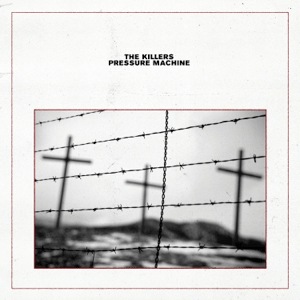 For about two decades now, The Killers have been channeling American small town rock through their own Vegas glitz & glamour, expanding the highs & lows to stadium size. The Springsteen aspirations have been obvious since sophomore record Sam’s Town, and even if they’ve never matched their ambitions (or breakthrough debut Hot Fuss), it has given them stadium-size success. After the more Killers-than-ever Imploding the Mirage (QRO review) last year, the group turns inward with Pressure Machine, as singer Brandon Flowers details his life growing up in his own small town of Nephi, Utah. And the results are both expected and unexpected, moving but also obvious.

Stripping away much of their giant effects, but not giant aims, has certainly made Pressure Machine its own record, a distinct change with intimate, storytelling pieces. But so often that storytelling lack subtlety, is quite on-the-nose. Instead of alluding to the opioid epidemic, Flowers flat-out states it, even putting a line about being busted for trafficking “hillbilly heroin” in the giant crescendo of opener “West Hills”. The damage wrought by small town homophobia in “Terrible Thing”, domestic abuse on “Desperate Things”, and giving up on dreams pretty much throughout is stated fairly plainly, the musical cues to how you’re supposed to feel blatant (and there’s questions about Flowers’ placement of himself as narrator, whether he should be singing from the perspective of a suicidal gay teen, whether he should cast himself as the reluctant vigilante against a wife-beater).

That’s not to say that one doesn’t feel on Pressure Machine. The Killers have the skill to pull at your heartstrings, and indeed Flowers’ vocals are improved by eschewing some of his usual grandiosity. And it’s not as if the issues aren’t real, the emotions aren’t valid, even if you didn’t grow up in a small town. It’s just you can so clearly see what The Killers were going for, how high they were aiming, and that they did not make Springsteen’s Nebraska. Indeed, there are moments that do feel more showing than telling, such as the lost dreams of “In the Car Outside”, or the small town girl of “Runaway Horses” (aided distinctly by including Phoebe Bridgers).

Also, it needs to be mentioned that many of the songs are introduced by short recordings of small town folks talking about their lives in their towns, good and bad. While on first listen, these recordings add to the authenticity of Pressure Machine, they quickly heighten the obviousness of what The Killers are going for, almost as if they didn’t trust that they could get their point across. And like spoken recordings in general on musical albums, after repeated spins they distinctly wear out their welcome (to the point where one wishes they were their own mini-tracks, that could be skipped or cut out).

On the whole, it is good that The Killers tried something new, tried something true, particularly for a band as big as them. And one cannot deny that this is all heartfelt, and ambitious. If they missed their mark by a distance, it was a high mark they set for themselves.