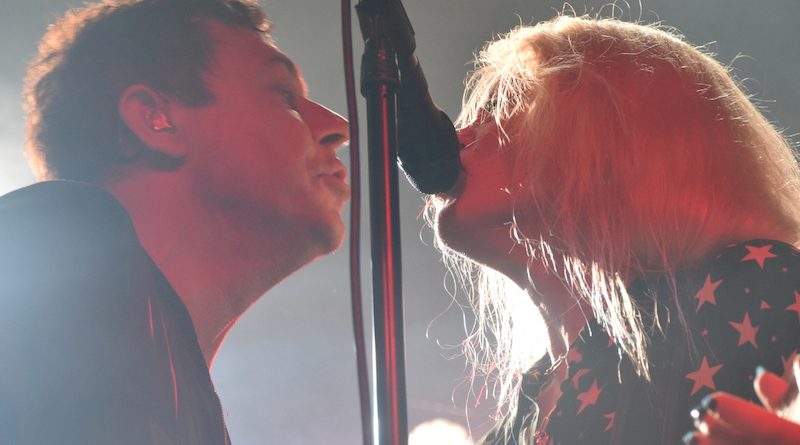 Click here for all of QRO’s coverage of The Kills in QRO’s ‘Spotlight On : The Kills’ feature

Like all of us, The Kills shut down during COVID, though they weren’t inactive. Alison Mosshart (QRO interview at start of COVID) put out her first solo song “Rise” (QRO review) and album, CAR MA. Then she & co-Kill Jason Hince got back together to release b-sides & rarities collection, Little Bastards (QRO review). And this year, they decided to celebrate the seventeenth anniversary of No Wow by playing that & more over two nights at Brooklyn Steel (QRO venue review), concluding on Saturday, June 11th.

The 17th anniversary is a bit of a random one, but really not much less meaningful than 20th, and more than 15th or certainly 10th (which is just too soon to have an anniversary unless it’s of your marriage…). But really, it was a chance for the duo to get out and play some live shows. These two NYC dates, along with two before them in Los Angeles and one opening for Jack White (Mosshart’s Dead Weather side-project compatriot), were the only ones they’ve played since COVID shut everything down, so any excuse was a good one, and this let them bring out some old songs.

The set wasn’t ‘whole the album, front-to-back, then some other songs’ like the usual album anniversary show, but did start with No Wow’s killer title track. And there were a number of Wow songs they hadn’t played in a long time, such as the “song from a long time ago,” “Rodeo Town” – there was even Wow’s moment of tech sounds, “Telephone Radio Germany”. But this set spanned across their discography (though none actually from Little Bastards), including favorites such as “Kissy Kissy” (2003’s Keep On Your Mean Side), “U.R.A. Fever” (2008’s Midnight Boom), “Pots and Pans” (2011’s Blood Pressures – QRO review), and “Hard Habit To Break” (2016’s Ash & Ice – QRO review).

And though they were just the pair of them up there (plus a drum machine doing hard & great work), The Kills are a force on stage. Mosshart’s bleach blonde hair is great when she whips, and she whips it to the music a lot. Hince doesn’t fall behind or stay in her shadow, shredding to the crowd. They’ve got a great back-and-forth, when Mosshart isn’t pacing back-and-forth herself (her other hard habit to break? Sleeves descending down and being pushed up, over-and-over).

It’s been great to see all your old favorite come back, post-COVID (okay, we’re not really ‘post’ COVID, but vaccine & booster have given us a new normal more like the old one). They don’t really need some random anniversary or anything to get back on stage, because The Kills own their stage.