More Click here for photos from this show in the QRO Concert Photo Gallery Click here for all of QRO’s coverage of The Lemonheads in QRO’s ‘Spotlight On :... 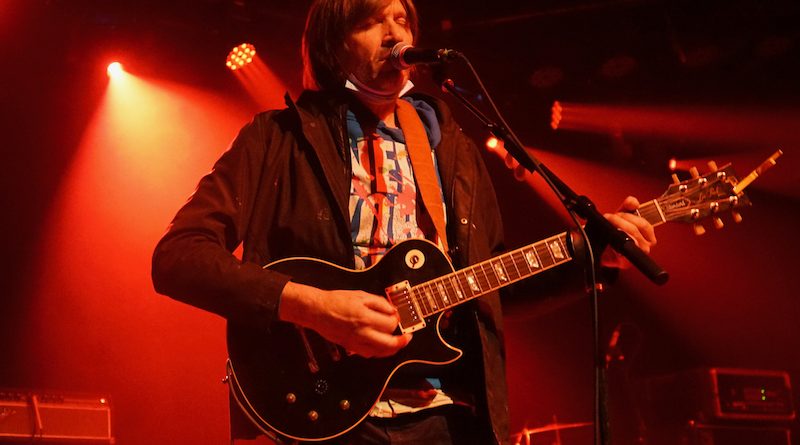 Dando sang this night in a well-maintained baritone-bass range. He got a little silly with his face mask on “Hospital”, putting it on top of his head and for at least a minute over his eyes while still playing guitar. He still does a lot of the band’s top hits, and can still hold some long notes on the ‘90s pop songs such as “The Great Big No” and “It’s a Shame About Ray”. There were song intros as well as “1 2 3 4” Ramones-style count offs by Dando when the songs ran together. The count-offs were needed as there were 32 songs to do in the tight set that included very early Lemonheads pieces like “Left For Dead” and “Don’t Tell Yourself It’s Ok”.

Dando’s guitar playing was fairly flawless this night too. As typical, there were a lot of major 7th chords and chords rooted on that degree, and there was well-rationed use of wah pedal. Dando only had three pedals, a tuner and a switch on the floor. The economy of sounds kept it interesting.

Although uncommon, Dando uses capo on his electric guitars as well as acoustics. There was nice planning with the capo on the third fret of the Gibson Les Paul Standard for three songs in a row, at one point. The solos had a lot of space and weren’t too busy with lots of notes. He also used well-placed feedback and pinch harmonics on guitar. The chord progressions led with lower notes that weren’t always the root of the chord.

After the 17-song full electric set, Dando stripped off his jacket and hoodie down to a short sleeve shirt and did a seven-song solo set on his Gibson acoustic, a short three-song electric band set, and then a five-song closing solo set on the acoustic. There were lots of dynamics on the guitar as well as singing. The acoustic sounded like a twelve string on the high-end notes. There were two songs where the guitar was unplugged completely so that he could sing quietly with the audience.

Covers during the solo acoustic parts included Smudge’s “Outdoor Type”, Lucinda Williams’ “Like a Rose” and “Frying Pan”, “The Speed of the Sound of Loneliness” by John Prine, and “Frank Mills” by Galt McDermot, which was the loudest acoustic sing-along, probably due to Atlanta’s large gay population.

Michael Jones of Swervedriver was the drummer. He has a great ear. He used the ride cymbal as a replacement for a China Cymbal sound. He changed use of the hi-hat pedal based on guitar sustain. Loose hi-hat was used when the guitar chords were held and tight hi-hat was used when the chords were short or palm muted. The bass drum was rather large and had a deep, boomy tone to it. The toms were larger than average, likely to match the low tone of the bass drum.

Farley Glavin’s smooth bass lines kept the groove going. He was very traditional as a bass player , playing the root notes of the chords most or all of the time. He was always on time, having played hundreds of Lemonheads shows and being a long term member now. He sang backup on some songs, not a lot, but well-placed call and return or harmonies.

The Lemonheads future dates and venues: Keep up on thelemonheads.net

Dean Wareham – I Have Nothing to Say to the Mayor of L.A.