Nearly every successful musical act has their ‘breakthrough,’ a single or an album that made their name, put them on the map, and opened the doors to the career... 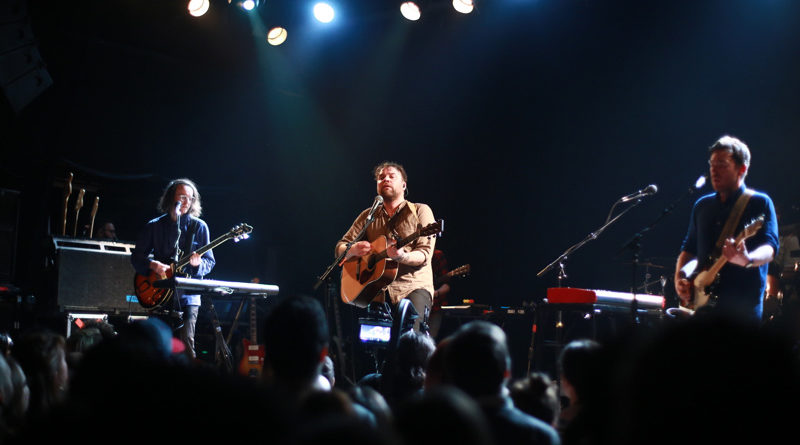 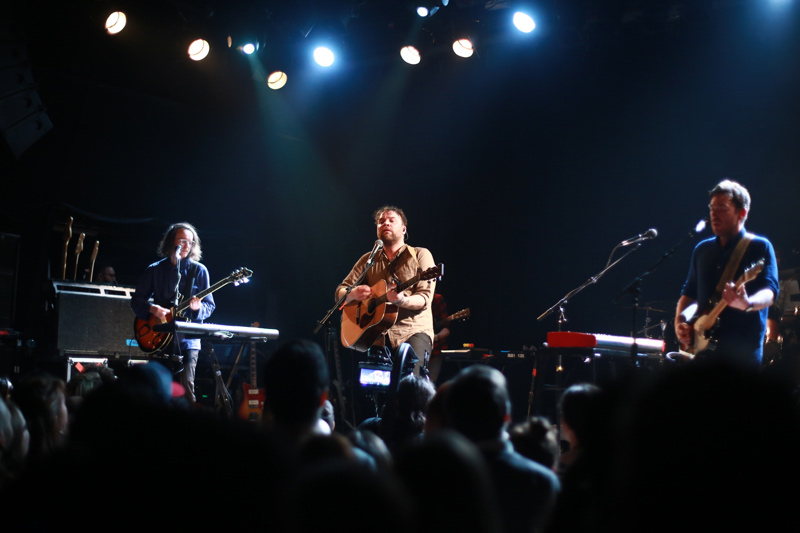 Nearly every successful musical act has their ‘breakthrough,’ a single or an album that made their name, put them on the map, and opened the doors to the career that followed. A lot of acts don’t make it much farther than that, forever living in the shadow of that breakthrough, until finally breaking up, then getting back together a decade late for a reunion tour where they play the breakthrough again. But sometimes an act can build an acclaimed catalog that makes the breakthrough ‘first amongst equals,’ if even that (look how far Radiohead have come since “Creep”…).

A decade ago Scotland’s Frightened Rabbit released The Midnight Organ Fight, whose Highlands tragedy and heartbreak birthed a career that has kept on going with albums like 2010’s The Winter of Mixed Drinks (QRO review), 2013’s Pedestrian Verse (QRO review), and 2016’s Painting of a Panic Attack (QRO review). They’ve played big places on both sides of the Atlantic & more, but for the start of 2018 they decided to return to Midnight and smaller venues, including Brooklyn’s Music Hall of Williamsburg (QRO venue review) on Saturday, February 24th.

Music Hall was a decidedly smaller venue for an act that last played the borough at the bigger Brooklyn Steel (QRO live review there), and even though the Brooklyn date was one of two in the city (following the prior night at Manhattan’s Bowery Ballroom – QRO venue review – Music Hall’s very similar once-was-sister space, before recent ownership changes split the family), the place was packed. The tight crowd stretched all the way past the soundboard and to the back doors, though there was a second soundboard on the stage floor in front of the main one, taking up some crowd space. Apparently footage was being shot for a documentary, as there were two men with filming rigs who struggled to make their way through the audience. But the crowd was well behaved, perhaps because they tilted older (and richer), being folks who were hipsters ten years ago, back when Midnight came out.

Interestingly, Frightened Rabbit didn’t begin the night with The Midnight Organ Fight, but rather “Living In Colour” (Winter), “Holy” (Verse), “Swim Until You Can’t See Land” (Winter), and “Get Out” (Panic). It is rare that playing a single album can take up a whole evening, but usually it is played in full from the start until the encore break, with the encore return reserved for other songs. But as singer/songwriter Scott Hutchison remarked during the early, non-Midnight pieces, “We’re just getting warmed up” – and to a fan who seemed to disagree with the decision, or perhaps just made his or her own request, “It doesn’t matter, because you don’t have a choice…” 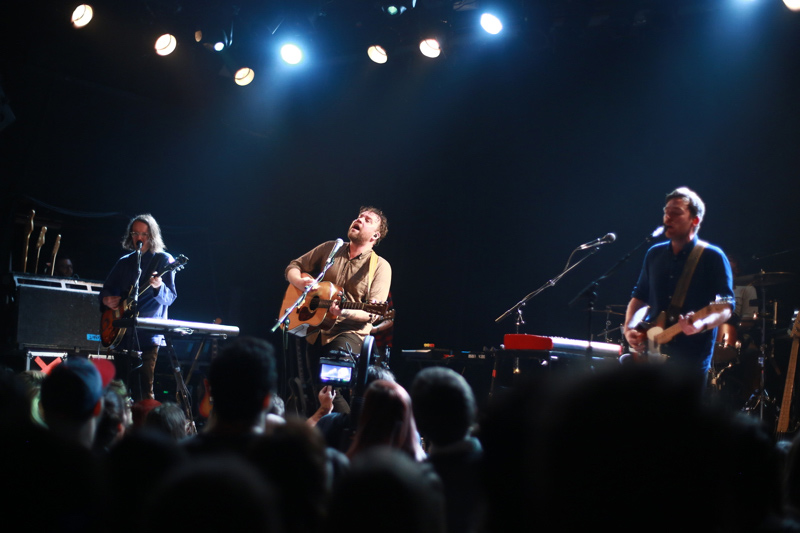 Still, those were all songs that Frightened Rabbit have played before, and fans had likely seen live before, as opposed to all of Midnight Organ Fight. Undoubtedly some in the audience hadn’t caught the band touring it way back when they were breaking out (though the group did release a great live album from the period, Liver! Lung! FR! – QRO review), so this was the first time to catch the non-singles, and indeed there were songs that the band almost never plays.

So yes, there was opener “The Modern Leper”, a longtime live staple and possibly closest to their ‘breakthrough single,’ but also the rarer played following “I Feel Better” – Its refrain, “Only to be released when I sing all the songs I wrote about you / This is the last one I’ll do,” Hutchison remarked, “Is a fuckin’ lie – you know, because there’s a whole album about it. Not the last one…” Frightened Rabbit did the less done backend of Midnight, “Poke”, “Floating In the Forth”, and “Who’d You Kill Now?” They did the record’s two instrumental interstitials, “Bright Pink Bookmark” and “Extrasupervery”.

Playing an album top-to-bottom can sometimes produce an awkward set list: the hit songs are bunched in the front, one after another and not spaced through the evening, while the final piece often isn’t the big rousing finish one looks for live. That was a bit of an issue with The Midnight Organ Fight, as no one actually needed the interstitials (though you know super-fans would call Frightened Rabbit out if they didn’t play them…), and the finish of the record pales in comparison to the front. Hutchison even joked about the track list not working as a set list, saying between “Poke” and “Floating”, “In a normal show, we’d never be stupid enough to put these two songs next to each other.” But, in a rather odd way, doing the track list as the set list, playing it live like you listen to it at home, made it more unique. Plus, no one could shout out requests.

A major draw to any Frightened Rabbit show is Hutchison’s hilarious between song banter, always done in his Scottish brogue (though undoubtedly his family & hometown friends think that he sounds like an English wanker by now…). His self-effacing humor provides a nice contrast and compliment to his serious musical sadness. The packed space made it a bit harder to hear him that usual big shows, but he still joked. He had a long talk before doing “Poke” solo, even pointing out that it’s the only time his brother & drummer Grant (QRO interview with both) lets him talk, “So I’m gonna take it.” During the crowd shout-along to “Old Old Fashioned”, Scott got the crowd going by exhorting, “C’mon Brooklyn, we’re all so old, it’s tough to get out of bed…”

And there were a lot of Midnight sing-alongs. You’re gonna get that at any ‘play an album in full’ show, since the folks know going in, exactly what they’ll be hearing, and any album good enough to play in full must have them, but Midnight is particularly littered with great ones. Perhaps the best was the “dance song,” “The Twist”, where at times the audience even filled in for Scott during the chorus, the Americans doing their best attempts at a Scottish accent. 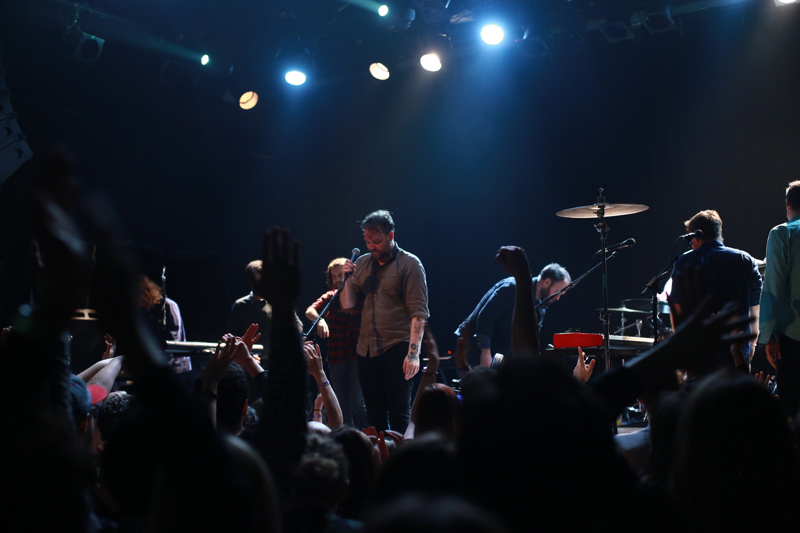 The slightly weaker end of Midnight going into the encore break, and lack of any Midnight songs for the encore, meant that the encore didn’t have quite the momentum of a usual show (another issue with ‘play an album in full’ shows – the crowd can be a little bit at a loose end when the album is finished, but the show isn’t). But after Verse’s “The Oil Slick” and “The Woodpile”, Frightened Rabbit got the audience into a big clap-along with Winter’s “The Loneliness and The Scream”, including bringing out opener Wintersleep (who had acquitted themselves well earlier in the evening, in a tough slot, playing to people who had come for a specific set songs, from someone else).

This anniversary tour of The Midnight Organ Fight is undoubtedly a sort of ‘break from the usual’ for Frightened Rabbit, something to do before making, releasing, and touring their next record, enabling them to play songs that they don’t normally do anymore, at places that they don’t normally go to anymore. But it showcased their breakthrough, while at the same time that they’re more than just their breakthrough. 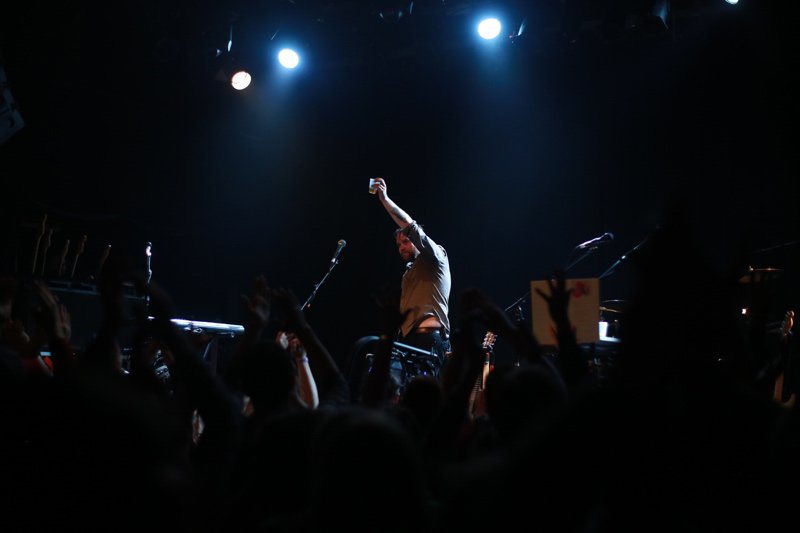