The Mighty Mighty Bosstones came back to Webster Hall.... 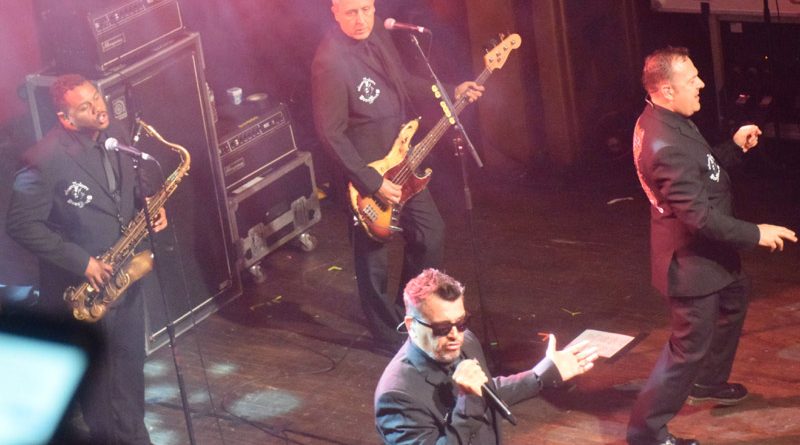 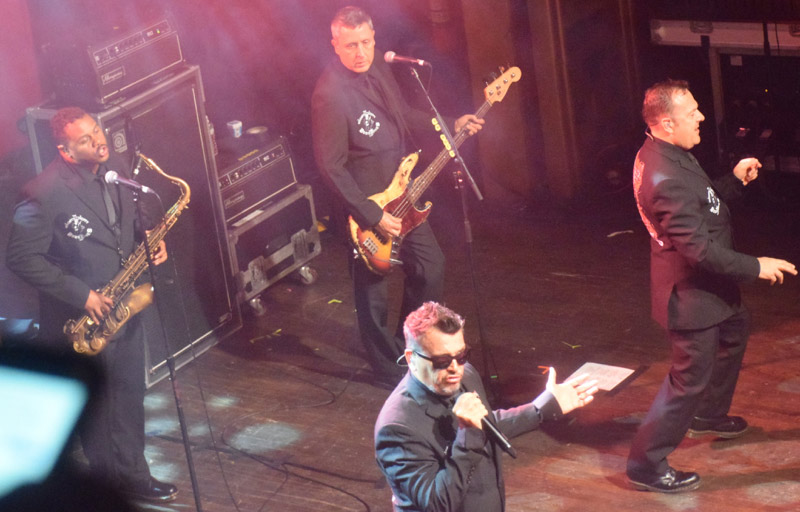 If you were listening to music in the nineties, you probably remember grunge, Gen X alternative, and when white kids started listening to hip-hop. But another great musical movement from that period was the third wave of ska. Following in the footsteps of the style’s Jamaican birth and early eighties British boom, it had nineties punks putting on checkered suits and skanking to crossover artists like Boston’s The Mighty Mighty Bosstones. Yes, time has moved on, and the band has broken up & gotten back together in the twenty-first century (who hasn’t?), but they’ve got an impressive collection of works, new as well as old, which they brought back to New York’s Webster Hall on Wednesday, August 21st. 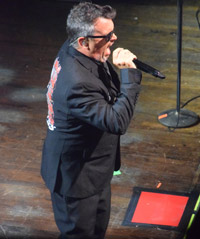 First things first, Webster Hall was packed. The Bosstones might be very much a Boston band (though none of them currently live there…), but they’ve got tons of New York fans (“We’ve never had a bad time here,” said frontman Dicky Barrett). Indeed, they played Webster just a few years ago (QRO live review), right before it closed down for renovations, Barrett lamenting the shutting of a place that had been so good to The Bosstones. Now they were in the redone space (QRO venue review), as was their audience, who stretched all the way past the back bar. And these weren’t all just aging rude boys, but included youngsters & rude girls, even in the skank (the dance, not the insult) pit that of course developed in the middle of the big stage floor crowd. 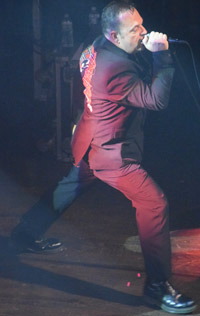 Last year, The Bosstones put out While We’re At It (QRO review), managing to wrangle the many-membered group together, whose other jobs range from college professor to airline pilot to announcer on Jimmy Kimmel Live (that’s Barrett). But this performance wasn’t focused on showcasing While, instead ranging across their history. The Bosstones opened the show with a rarity, “A Reason To Toast”, and did three from their nineties b-sides/rarities collection Medium Rare (one of the great b-sides/rarities record names ever, up there with Sugar’s Besides and We Are Scientists’ Crap Attack). 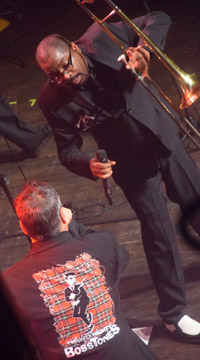 The set did feature While songs, such as the wonderful “Wonderful Day for the Race” (that’s the human race), and one “About the hard working people who get the short end of the stick,” “The Constant”. But that was alongside nineties classic hit singles “The Impression That I Get”, “Someday I Suppose”, and “Kinder Words”, other twenty-first century material, and even very old songs from when they were just starting out. Hell, there were even covers, like The Wailers’ “Simmer Down” (another nineties single) and The Byrds’ “Ballad of Easy Rider” to start the encore return (in tribute to the just-passed Easy Rider himself, Peter Fonda). 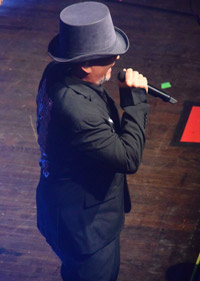 The band was on fine form, the day before the thirtieth anniversary of debut Devil’s Night Out was released. Barrett put on different fans’ hats for “Hell of a Hat”, and invited two kids – a little boy & a teenage girl – on stage to dance, but “only if they wanted to,” for “Nah, Nah, Nah, Nah, Nah”, with the band posing for “social media pictures” after the song. Much one’s focus naturally goes to Barrett, along with the dancing Bosstone Ben Carr, but one mustn’t forget the hard-working band behind them – it was particularly great whenever saxophonist Chris Rhodes got a chance to bust out on the mike, such as on “Everyone’s Better” and “Royal Oil”. 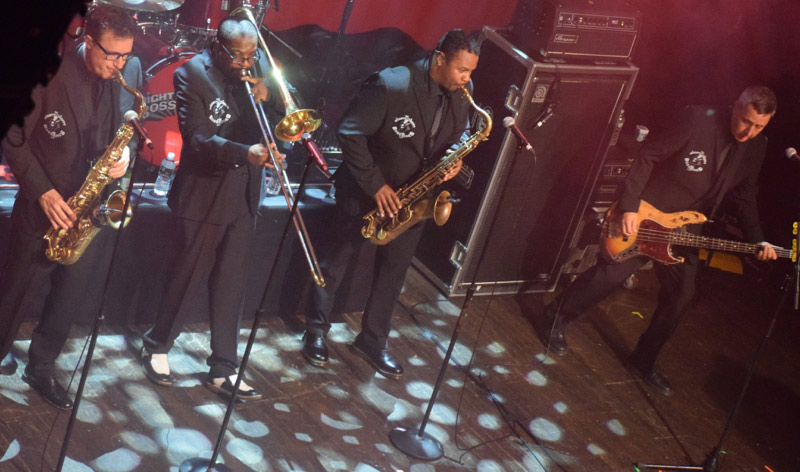 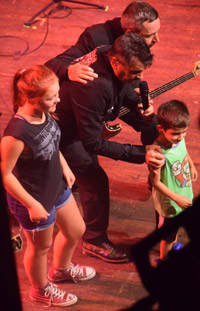 While last time at Webster, Barrett had bemoaned the place closing, this time he was thanking everyone for supporting live music, before “They Will Need Music”. That’s more important nowadays than ever, as Spotify doesn’t pay what record sales once did. 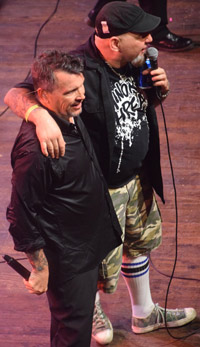 After the band introductions at the end of Burt Bacharach cover (and another nineties single) “What the World Needs Now Is Love” & doing biggest hit “The Impression That I Get”, the Bosstones didn’t just go into their encore break. Instead, Barrett invited onto the stage, “The man who taught The Bosstones how to do this,” “Astoria’s own” Jimmy Gestapo of Murphy’s Law. Some of the younger fans probably didn’t know Gestapo, and the older fans were probably disgusted at that, but he & The Bosstones quickly made it clear with Murphy’s “A Little Bit Ugly”, which The Bosstones covered on Devil debut, as well as “Cavity Creeps”. The Bosstones have always embraced their varied roots, from The Wailers to Bacharach to oi! punk – ska’s willingness to cover others from across the spectrum has always been a strong suit.

Of course, with their long history, The Mighty Mighty Bosstones couldn’t play all the songs you wanted, whether “Where’d You Go?”, “Don’t Know How To Party”, “Toxic Toast”, “1-2-8”, or even “Walked Like a Ghost”. But this was a celebration of music. 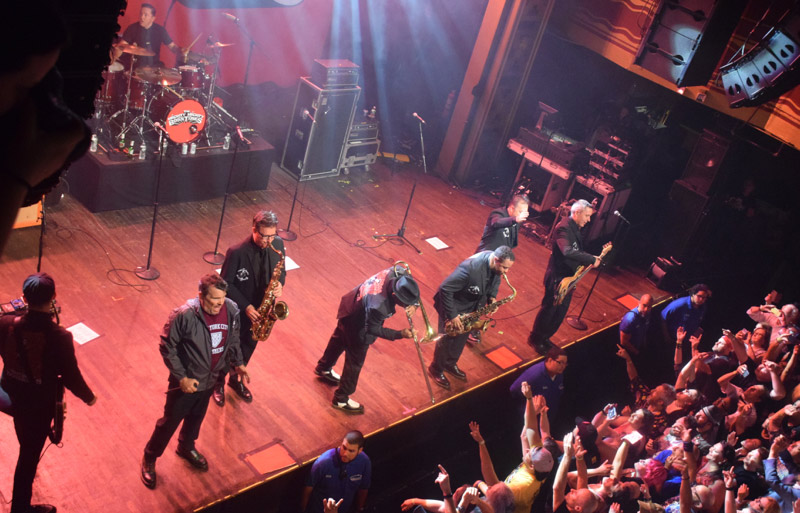