The Mighty Mighty Bosstones – When God Was Great

It’s been a tough year-plus, and we all need some nice things back.... 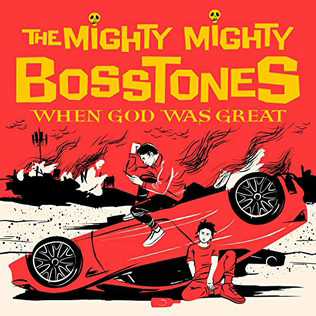 It’s been a tough year-plus, and we all need some nice things back. We need to go again to a game, to a movie, to a show; we need our old favorites. The Mighty Mighty Bosstones are a definite old favorite, probably the premiere act of the nineties third wave of ska, beloved by a certain generation of skankers and Bostonians, even if they don’t wear the clothes or still live there. It’s just great to have out their new record, When God Was Great.

God is decidedly a Bosstones record, mixing ska and punk rock in their checkerboard fashion. If it doesn’t have the big breakthrough singles of the nineties like “Don’t Know How To Party” or “The Impression That I Get”, it’s a very consistently strong ska-punk album. And it does have a particularly strong middle, singer Dicky Barrett and crew reminiscing about the old Boston days in “You Had To Be There” and the title track, partying to “The Killing of King Georgie (Part III)”, and delivering a Bosstones anthem with “What It Takes”.

At almost an hour, When God Was Great is probably overstuffed, particularly the almost eight minute-long closing sing-along “The Final Parade”, but The Mighty Mighty Bosstones have always been an overstuffed act, from the horn section to dancer Ben Carr. And currently ska is in its latest incipient ‘fourth wave’ that everyone made a joke about during COVID, a wave that is always promised but never seems to quite come. So, we’ll take all the Bosstones we can get.

Garbage – “No Gods No Masters”