You might remember The Mighty Mighty Bosstones as the biggest success from the nineties ska boom.... 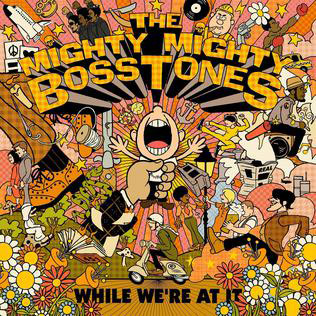 You might remember The Mighty Mighty Bosstones as the biggest success from the nineties ska boom (if you don’t count No Doubt, and you really shouldn’t…), or from being so nineties that they were in Clueless. Since then, they’ve broken up, they’ve gotten back together, they’ve moved out of Boston, they’ve even gotten jobs in L.A. (like singer Dicky Barrett’s job as announcer on Jimmy Kimmel Live). But the many-membered outfit got together for their first record in seven years, While We’re At It, which has the signature Bosstone tone.

Of course The Bosstones would start with a song about a girl skankin’ her way outta “Green Bay, Wisconsin”, and there are many upbeat hepsteppers, like “Wonderful Day For the Race” (the human race), tribute to not gentrified “West Ends”, and straight up “In Honor Of”. But there are also times when the band goes darker and so does Barrett, primarily the old times & old friends “Walked Like a Ghost”. Yet most special mention must be made of when the band kisses-off these terrible times, their take on ‘both sides,’ “Absolutely Wrong”.

It’ll never be the nineties again, and don’t hold your breath for a ska comeback, but The Mighty Mighty Bosstones deliver once again, for the whole country & beyond.