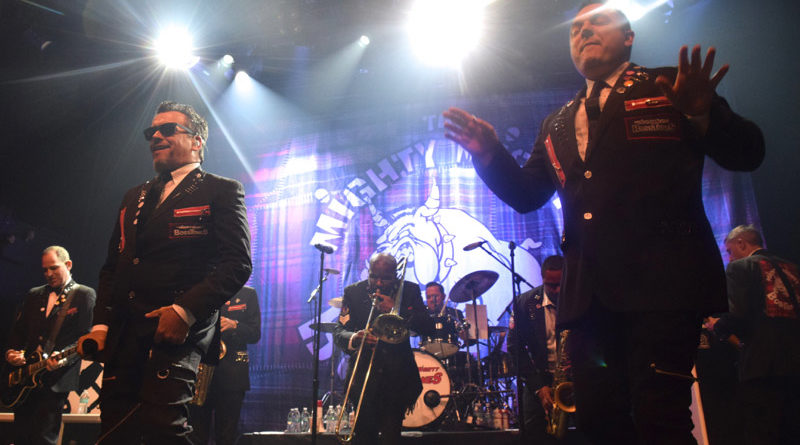 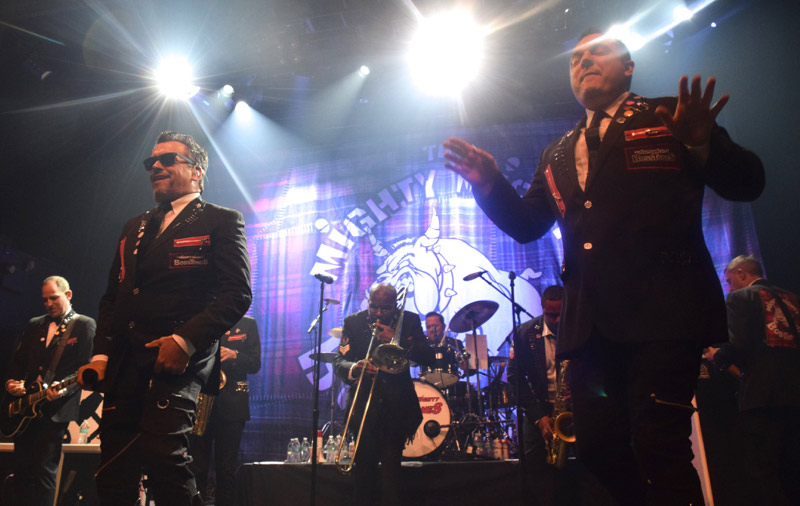 Click here for photos of The Mighty Mighty Bosstones at 2014 Riot Fest in Chicago, IL in the QRO Concert Photo Gallery

You may remember The Mighty Mighty Bosstones from such things as the ska boom in the nineties, including their hit album Let’s Face It and single “The Impression That I Get”. They were also the definition of Boston in that decade and beyond (including cartoon versions of them on the recent Simpsons Boston episode…), but also the definition of ska music (to the point where other ska acts would sing, “Boston’s nice / But the Bosstones are lame…”). If you lived in the Northeast at that time, they were ubiquitous.

Of course the twenty-first century is all about what is old is new again, and that definitely includes The Mighty Mighty Bosstones playing Let’s Face It in full (and more) at Webster Hall in New York on Tuesday, July 25th.

First things first, 1997’s Let’s Face It still rules. Maybe you dispute that it is their best record, as perhaps you were an O.G. Bosstones fan that prefers 1994’s Question the Answers or the prior year’s Don’t Know How To Party, but if you like the Bosstones, you like Let’s Face It. It particularly has a great opening explosion, which was an opening explosion this night at Webster Hall, with “Noise Brigade”, “The Rascal King”, “Royal Oil”, and yes, “The Impression That I Get”.

[note: your correspondent particularly loved shooting the first three songs, singing along the whole time and having the singer Dickie Barrett look him straight in the camera lens – only to not catch “Impression” as your correspondent was in the post-shooting figuring out where he should go after the photo pit…] 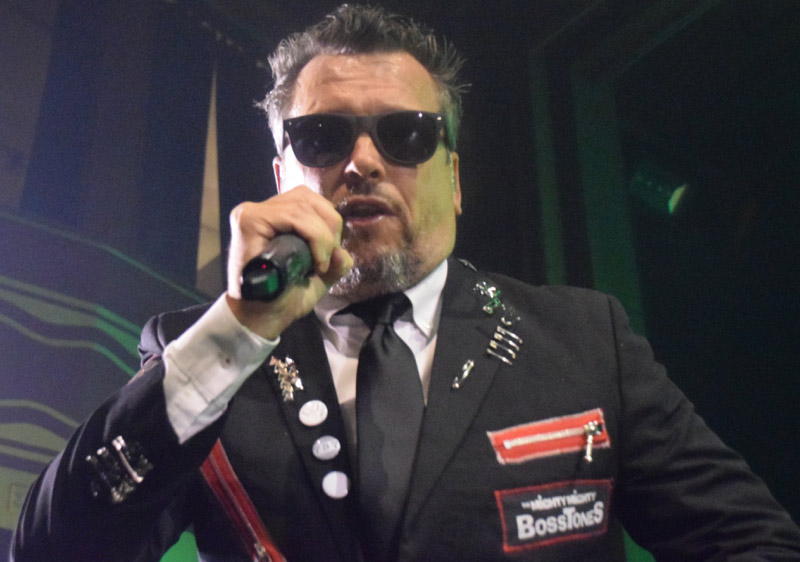 But let’s focus on a few other great songs from that record. “Another Drinkin’ Song” is an awesome drinkin’ song, at a show that was very much about drinking at Webster Hall. Indeed, it was a little disappointing that VIPs, at least, weren’t rocking as hard as they should to that song (“What you call the disease / I call the remedy / What you’re calling the cause / I call the cure”). There was also “Nevermind Me”, which Barrett introduced as about the time he was robbed at gunpoint in New York City. But he also joked before “Drinkin’”, “I’d tell you the next song, but you probably know it. If you don’t know it, it’s okay…”

Playing a ‘full album in full’ is always a double-edged sword, for any act. It’s invariably their most popular album, and fans know that they’re gonna get their favorite songs from that album (also, no shouting for requests…). But it also means that every song on the album is going to be played, even the filler pieces. Plus, it leaves a big question mark as to what the act is going to do for the rest of the show, because no album this side of Pink Floyd’s The Wall is long enough to take up an entire show. Thankfully, Let’s Face It is strong from start to finish (Barrett reference that they’d only played album closer “1-2-8” three times before that night, “And fourth time’s the charm!”). 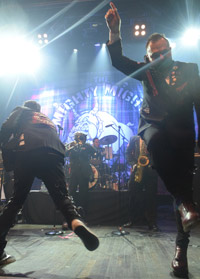 Also, unlike some twentieth century hits who play their hit album in full, The Mighty Mighty Bosstones have much, much more than Let’s Face It. Indeed, the album only took up less than half their set, twelve songs of twenty-eight total. There wasn’t a break in the band’s energy as they embarked on a mix of post- and pre-Face It songs. What you liked depended on how you knew The Bosstones, whether you knew their more recent albums or their early ones. The post-Face portion of the night opened with “They Will Need Music”, from the band’s most recent record, 2011’s The Magic of Youth, a very apropos song (earlier in the evening, Barrett mentioned how Webster Hall – QRO venue review – had been good to The Bosstones over the years, and how sad it was that the venue was closing [for corporate owner renovations]; more than once he exhorted the crowd to the value of live music, and to not let it die). But there were also old songs like their cover of Bob Marley & The Wailers’ “Simmer Down” (Barrett made sure to cite who wrote it beforehand), the band’s original hit-before-the-big-hit “Someday I Suppose”, ode to the “second best place in the world,” “Almost Anything Goes”, early classic “Devil’s Night Out”, and more. Indeed, the encore return was “Where’d You Go?”, their original Boston hit.

And this all doesn’t even describe the awesome on-stage action from The Mighty Mighty Bosstones. It’s very easy to focus on Barrett, as he is not only the singer, but indeed the face of the band (and he’s the most famous member, being currently the announcer on Jimmy Kimmel Live). Yes, he is electric on stage – with dancer Ben Carr, who is even wilder up there. Anyone who’s seen The Bosstones before (which was pretty much everyone at the show) knows that the band has a full-time dancer on stage, a “Bosstone”, but it was still special to see him as active up there now, in a show so long after their break out (and so long after they were young…). At one point Carr brought out a megaphone for Barrett, only for it not to work; Barrett asked how much money they spend on it, “Twelve dollars,” then noted that they still didn’t have charged batteries, and handed it to the crowd. 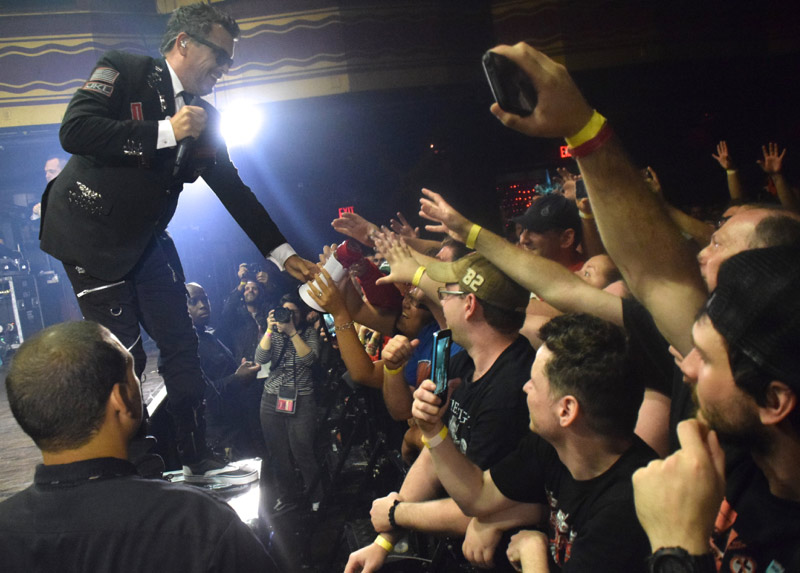 Oh, and the crowd! The Mighty Mighty Bosstones have a wild audience, even at this age (for them & their fans). Yes, there was a mosh pit, but this is a ska-core band, with a pit in the middle of the crowd that was all about fun, not macho (it even included girls, and full-on skanking). There were crowd surfers, but the security at Webster Hall handled them well, and the surfers handled themselves well. One could experience the show in the midst of the crowd, or in the back, including the balcony, which sometimes at Webster Hall is restricted, but not this night. 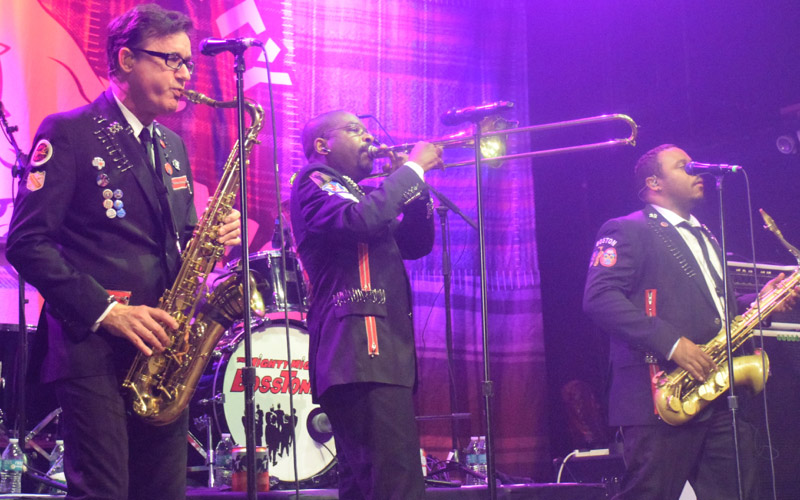 One must also make mention of the rest of The Mighty Mighty Bosstones. As said above, it is very easy to focus on Barrett, with side-time for Carr, but there is a whole band behind them. Indeed ‘whole band,’ because The Bosstones have three horn players, plus guitar, bass, keys, and drums. All of them are pushed back on stage (to give Barrett & Carr room to skank…), which allows them less time to shine physically, but, like any ska band, the horns are the core. Not to knock the guitar – Bosstones in particular have great guitar portions, perhaps why they were such a crossover hit.

The horns also showcase that the band is old school two-tone – second wave ska from early eighties England, which mixed black and white (i.e., ‘two-tone’) the way the vast majority of music at the time, or in the nineties, or today, didn’t and still don’t. Marley cover “Simmer Down” (which two-tone legends The Specials covered back in the nineties) included trombonist Chris Rhodes singing the verse and saxophonist Leon Silva getting a solo. Indeed, Barrett joke introduced the song, “If you know the words, sing along. If you don’t know the words, do what I do…” Which is just do the chorus…

At this point, seeing The Mighty Mighty Bosstones is the experience of a long-time fan seeing the band. Maybe you just knew them from that short period in the nineties where ska was big for a second. Maybe you went to college in New England. But there’s nothing quite like seeing an act that you loved back in the day do it like back in the day is today. 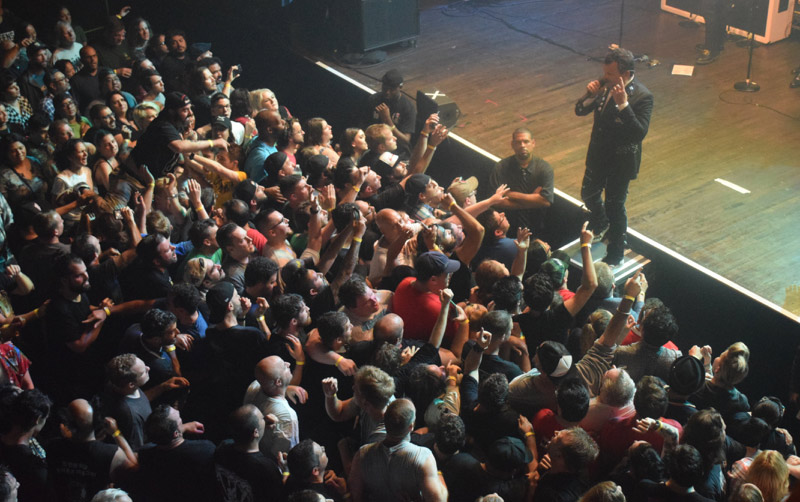