The National – Live at Capitol Theatre

The National returned for the tenth anniversary of Capitol Theatre.... 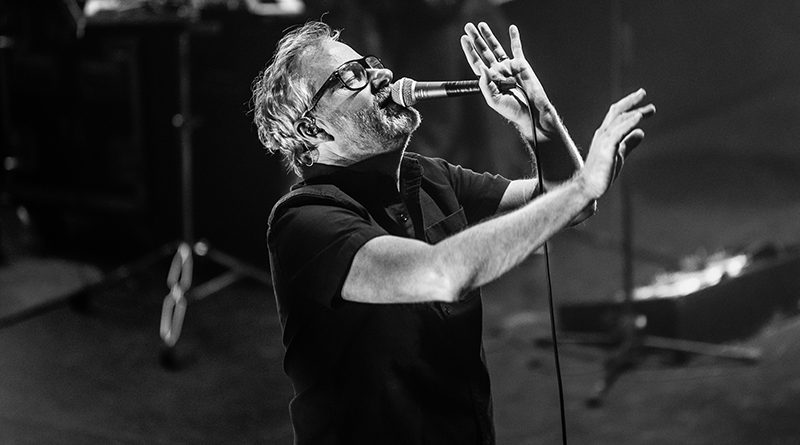 Click here for photos of The National two days later at Sound on Sound Festival in Bridgeport, CT in the QRO Concert Photo Gallery

We’ve been slowly getting back what was stopped by COVID, even in the particularly hard-hit music business. Venues have reopened, acts have gotten back on the road, and we’ve been getting back out there ourselves. A particularly wonderful return was The National, who finally played the NYC area they began in, at Port Chester’s returned Capitol Theatre – which was also celebrating its own tenth anniversary, on Friday, September 23rd.

It was just a decade ago that the old Capitol Theatre was remade and revived (QRO venue review), opening with a performance by none other than someone who’d played it back when, Bob Dylan. For the tenth anniversary, the owner, the mayor, and more were on hand for a special celebration before The National took the stage, including a plaque commemorating ten years, and promising another ten. They even celebrated that they’d finally booked The National, after years of trying.

One of the slower acts to return from the pandemic, this was the second-to-last show on The National’s first post-pandemic tour (closing out that Sunday at Connecticut’s new Sound on Sound Festival – QRO preview). And yes, it wasn’t in New York City proper, despite the band’s origins there (though they’re all actually from Cincinnati, and have since had kids & moved upstate). Likely Sound on Sound invoked the standard festival ‘radius clause’ to keep The National from the five boroughs, but were gracious enough to allow this show – indeed, online it was listed as, “Sound on Sound Presents.” And it’s not like The National’s fans haven’t aged as well, including having kids and moving out to the suburbs themselves. It was an older crowd, and naturally perhaps more bridge & tunnel than the old Brooklyn hipsters days.

But that didn’t mean the audience didn’t know all the words. Song-after-song, the packed crowd (who had to be repeatedly reminded not to take up the side throughways & stairs) sang along with lead singer Matt Berninger. This wasn’t just breakthrough oldies like “Slow Show” or into-the-encore break “Fake Empire” from 2007’s Boxer (QRO review), but newer and deeper cuts. It wasn’t just a single such as “Bloodbuzz Ohio” off of 2010’s High Violet (QRO review), but also a non-single like “This Is the Last Time” from 2013’s Trouble Will Find Me (QRO review). And it wasn’t just rousing songs such as oldie “Mr. November” (2005’s Alligator), but also slow & tragic pieces like “Rylan” from 2019’s I Am Easy To Find (QRO review), with opener Indigo Sparke taking up the female vocal part.

And special mention has to be made of “Mr. November”, with Berninger going into the crowd. He’s long did that, particularly with that piece, super-long mike cord trailing through the crowd behind him. But at Capitol Theatre, not only did he go in, go up by one of the back bars, but even go all the way past those bars & up the steps into the lobby – where your correspondent had followed him into, the only one there to sing the chorus, “I won’t fuck you over / I’m Mr. November” directly to/with him. No, didn’t take a photo until he left, because it needed to be experienced and the moment (and that would have been rude).

Oh, and The National also brought some new songs. They could have easily have just played their already-released material, so pent up has been the desire to see them live, but you know they didn’t spend the COVID lockdown not making songs. The encore began with the chiller sadness of “Weird Goodbyes” (QRO review – no Bon Iver this night, though). “This Isn’t Helping” was sad & slow & beautiful, while “Tropic Morning News (Haversham)” was more reaching. Berninger said only the day before that they’d written “Moon Drop Light” (“terrible name…” – it was later called “Eucalyptus Daylight” at Sound on Sound), making this its live debut. A great balance of epic & intimate, there were big cheers when Berninger asked, “What if we move back to New York?” – and there should have been big cheers for the “Moon Drop” name drop, “What about The Afghan Whigs?” (who played NYC around the same time, with their own great new album How Do You Burn? – QRO review).

As much as Berninger commands attention on stage, that is not to take away from the rest of the band. Brothers Aaron & Bryce Dessner are the musical maestros (even produced & recorded some of Taylor Swift’s Folklore & Evermore), more unassuming, but still getting chances to put their guitars in the air. And never forget about brothers Bryan & Scott Devendorf holding it all down on drums & bass. Indeed, The National are even able to integrate their extra keyboards and horns into their alt-rock songs, not random or obvious.

Ending pretty much on the dot at 11:00 PM, that meant that all those from the city could make the 11:13 PM train right next door to Capitol Theatre (there are precious few Big Apple venues as close to their mass transit stop as Capitol Theatre…). It was a great show, a great anniversary, and a great night back out.