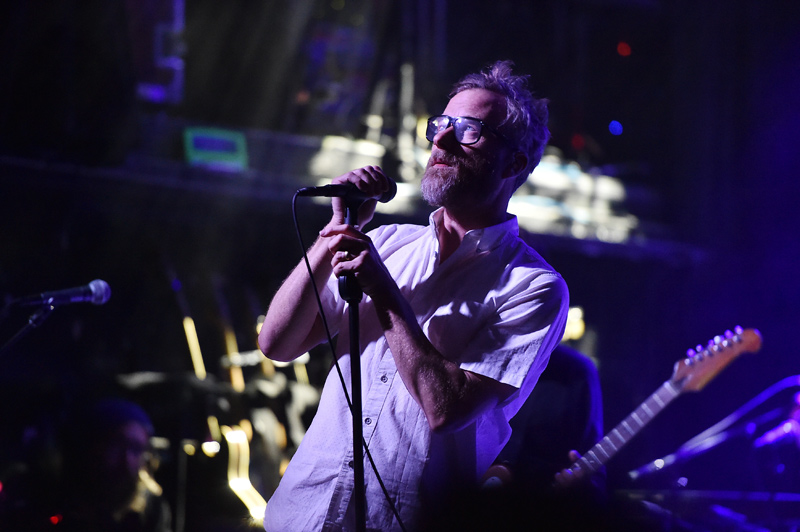 For the first time in 15 years, The Grammys are being held in New York City. Whatever you think of the music industry awards show (The Simpsons put it best), it’s one of, if not the biggest events in music, and without a ‘can’t play within the same market’ clause of most festivals. That means that, in the week leading up to it, there has been a boatload of musical events with Grammy-nominated artists, stretching from big corporate-sponsored multi-day happenings to indie label unofficial parties, swanky invite-only parties to charity benefits. One of the biggest is Citibank’s ‘Citi Sound Vault’, bringing big, Grammy-level names to the intimate-for-them Irving Plaza (QRO venue review), Wednesday-Sunday, January 24th-28th. For Thursday night, it was alternative heroes The National playing a special show. 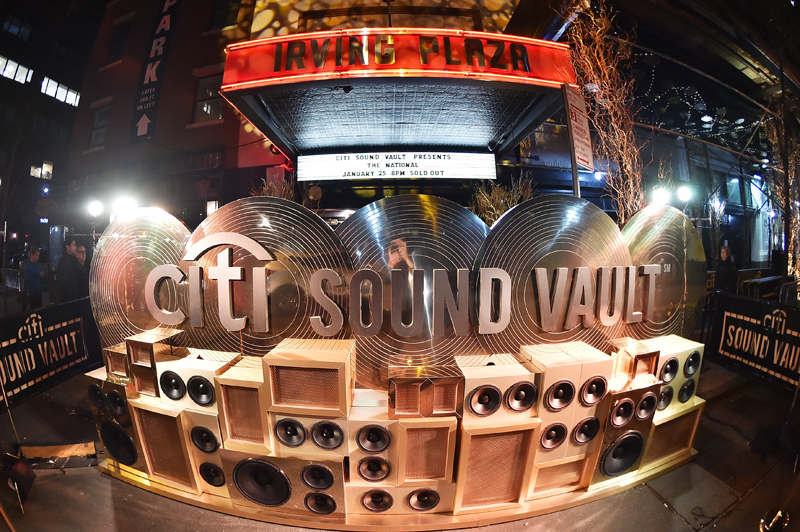 While the band (including two pairs of brothers) all hail from Cincinnati, they all lived in Brooklyn until relatively recently, making them locals & this a local show. Their last gig in the five boroughs was at Queens’ massive Forest Hills Stadium (QRO live review) last fall, behind last year’s twice-nominated Sleep Well Beast (QRO review). But as opposed to playing outside at where the U.S. Open used to be held, this was indoors at the smallest place they’ve played in a while. Singer Matt Berninger (not one of the brothers, though his own did a great documentary on them & him, Mistaken For Strangers) even joked that he got hit with a chucked beer can at Irving while at a Guided By Voices show back in the day (so long ago, Spoon opened) – it was also noted that, after that show, bassist Scott Devendorf (QRO interview) got in a fight, though none of them could remember why. Limited tickets had gone on sale, for Citibank customers, for the high price of $120, but still it was a packed house. It was also packed because the entire balcony was reserved for VIPs. Ever since Live Nation remodeled Irving Plaza, most of the balcony has been reserved for VIPs/paid upgrades, but in this case it was a true VIP party, including full open bar, classy make-your-own-tacos (including steak cut in front of you), and a wide variety of hors d’oeuvres. Indeed, the staff was quite plying the VIPs with eats, including desert near the end of the show. Of course there was still an even more VIP area past that, but there always is. 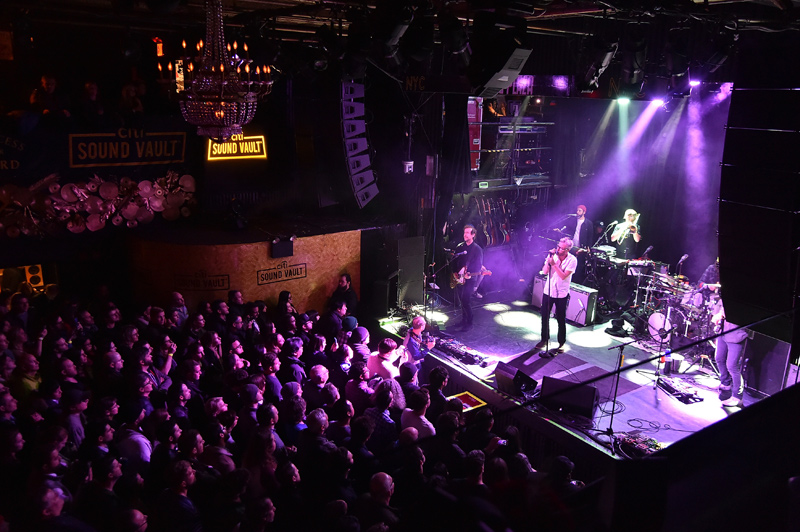 Click here for all of QRO’s coverage of The National in QRO’s ‘Spotlight On : The Natinonal’ feature

But even if you weren’t Citi-level special, it was a great show (Citi money also provided for live video of the event, displayed on the screens if you couldn’t see). The set list was actually not too changed from last year, opening with four from Sleep, but the band was there on the backs of that Grammy-nominated album. This meant a subdued start with “Nobody Else Will Be There”, but then big and evocative in the following “The System Only Dreams In Total Darkness”. However, the best Sleep moment came in the middle of the set, when Berninger dedicated the record’s anti-Trump “Turtleneck” to “Donald DUCK – that asshole…” He even swapped the cartoon character (who shares a name with our cartoon president) in for the title line. Berninger also dedicated Sleep’s “Carin at the Liquor Store” to his wife, Carin, though he wasn’t sure if she was even there yet. 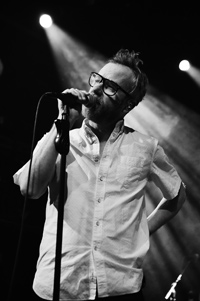 One thing that’s impressive about The National is how songs that were once new have become classics. Of course everybody loved into-the-encore-break “Fake Empire” from 2007’s Boxer (QRO review) – Berninger dedicated it to a friend, Hank, who was getting married in a few days, but added that “Fake” isn’t about marriage… – and encore’s “Mr. November” from 2005’s Alligator (even if now we are being fucked over by our new Mr. November). But now pieces like “Bloodbuzz Ohio”, “Conversation 16”, and “Lemonworld” from 2010’s High Violet (QRO review) are sing-along staples. Guitarist Bryce Dessner – or maybe guitarist/brother Aaron; they’re not easy to tell apart like bassist Scott & drummer Bryan Devendorf – noted before “Lemonworld” that they were only playing it because someone had asked them to, before the show, but had to remember how to play it (Berninger noted after that he’d forgotten how much of that song for him was just singing, “Doo doo doo doo…”).

But this wasn’t just a standard set. In the middle of the night, The National covered The Grateful Dead’s “Peggy-O”. Two years ago, the band put together an all-star cover/tribute record to The Dead, and The National themselves covered “Peggy-O”. It was interesting to see how music by that quintessential hippie band could fit so well into a modern alternative act’s sound (though Berninger admitted that they left out a few verses – at least it wasn’t something from Bon Jovi’s Slippery When Wet, which he joke-threatened beforehand). And for the encore return, The National started with their unreleased “Rylan”, a moody, dark piece.

Yes, this was a corporate event [as one indie music aficionado pointed out to your correspondent, who was definitely using the #CitiSoundVault hashtag…], but not just a corporate event. It was seeing one of the best alternative acts in the world playing up-close and having fun (Berninger even spilled beer on Aaron & Bryce Dessner when he introduced them), just before they hit The Grammys in their hometown.