It’s amazing how far The National have come.... 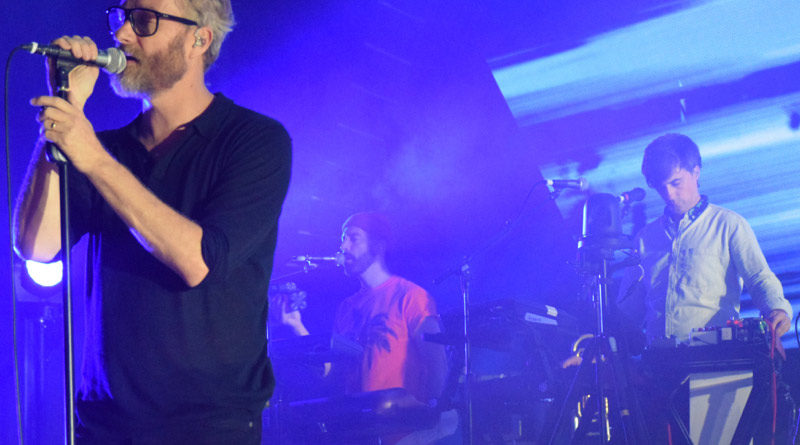 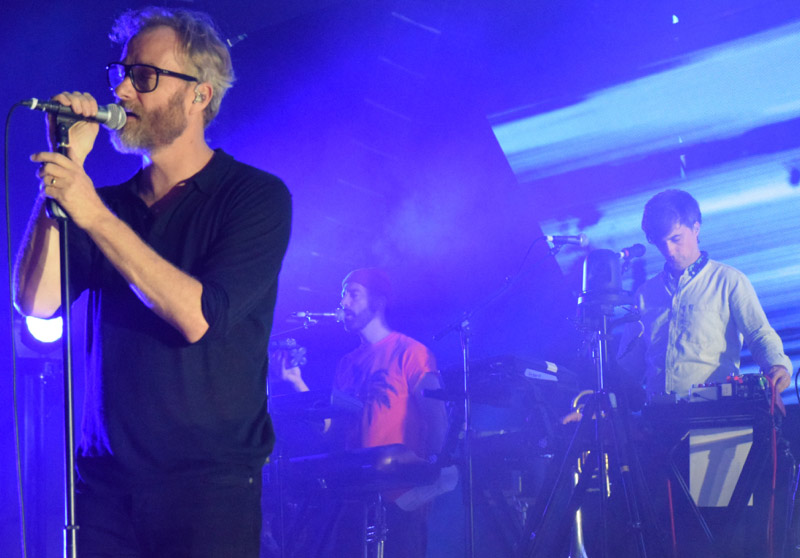 It’s amazing how far The National have come. The two-and-a-half pairs of brothers from Cincinnati broke out of Brooklyn a decade ago with Alligator and Boxer (QRO review), two records that were epic in all the right ways, yet also viscerally intimate. Their arc of successful indie-tragedy continued with 2010’s High Violet (QRO review), 2013’s Trouble Will Find Me (QRO review), and this year’s Sleep Well Beast (QRO review), bringing them to play a massive show at Forest Hills Stadium (QRO venue review) on Friday, October 6th. 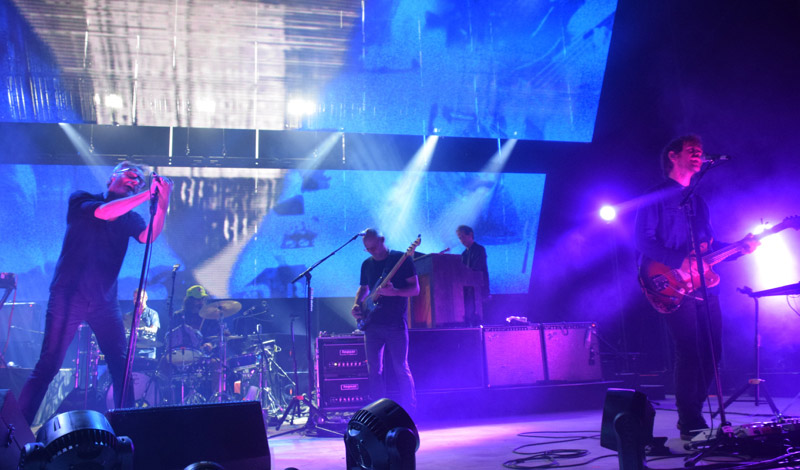 While the band members have recently all moved out of Brooklyn (that’s what happens when you have kids…), and are still very active in their native Ohio soil, and the Stadium is in the borough of Queens, this was still a hometown show, with the former site of the U.S. Open absolutely packed, both in the general admission area and up the high bleachers. There was a long line/scrum to enter through the metal detectors, worrying with the early start but understandable after the Las Vegas shootings, and there were a great number of detectors making it work relatively smoothly (the older National fans also aren’t the quickest to anger). Above the stage were three tilted projection screens, which displayed everything from video of the band walking to the stage to music video backdrops. 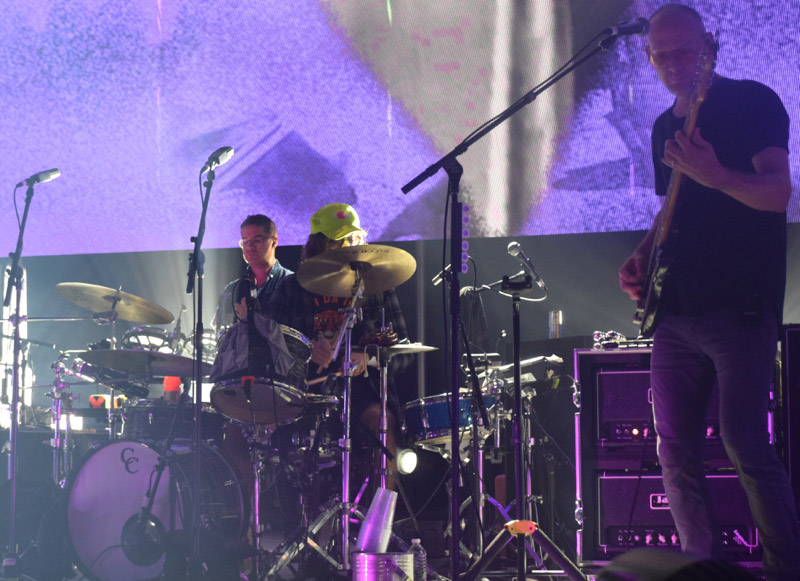 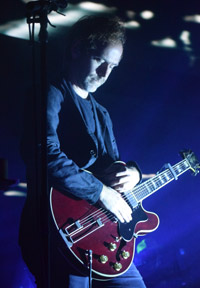 Singer Matt Berninger has long been the central focus of the group’s live shows, flanked by the brothers Dessner, Aaron & Bryce, on either side, with the brothers Devendorf, Bryan & Scott, further back on drums & bass (respectively). They’ve also got an impressive set of touring musicians, including Conrad Doucette (of Takka Takka) “in the shadows” on percussion, plus Ben Lanz and Kyle Resnick pulling out all sorts of instruments. The classically trained Dessner brothers have taken the opportunity to let their indie-classical ambitions grow with the band’s success. It was notable that, for the Beast songs at least, one of them would usually be in the back on raised piano, though they still flanked Berninger and raised their guitars together on older, more epic-rock songs – and Sleep’s epic-rock single “Day I Die”. 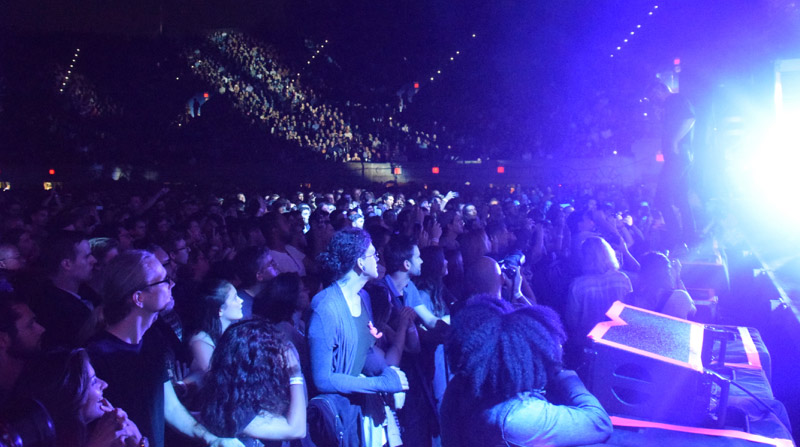 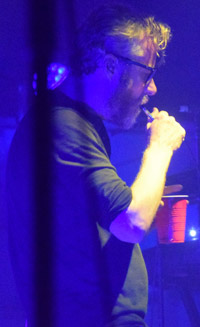 Berninger has grown since his early days, if only trading drinking wine on-stage to vaping smoke (likely weed), turning around and taking a step back, out of the light, to “mixing weed with my wine,” as he sings on “Walk It Back”. He did often walk up, on top of the speakers in the photo pit to get closer to the crowd, singing from there a few times (including once right above your correspondent), and at later joked after he knocked something over that, “Somebody fucked up and knocked that shit over,” but the first half of the show was a more subdued set for a more subdued album, as Beast comprising most of the early part, from opener “Nobody Else Will Be There” (which saw a big cheer from the crowd for its New York reference) through “Walk It Back” and to “I’ll Still Destroy You”, with even the older “Don’t Swallow the Cap” (Trouble) and “Afraid of Everyone” (Violet) more fitting in that mood. Berninger did dedicate the new “Dark Side of the Gym” to one attendee, Tara, with whom Berninger went to two high school dances with – adding that the song is about his wife Carin, but, “It can be read many ways, Tara…” In the seated bleachers, it was the perfect piece for the female of the many couples in attendance to rest her head on her significant other’s shoulder. 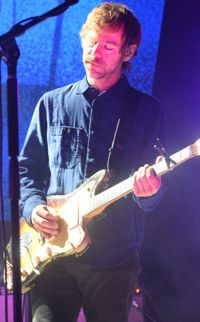 The show shifted into greater activity with Sleep’s “Turtleneck”, a rocking, even angry number that admittedly doesn’t sound a lot like The National. It’s about Trump, and the political Berninger dedicated it to, “All the history professors out there.” There was also Alligator classic “Secret Meeting”, mock-dedicated to Jared Kushner, who Berninger joked had been Bryce’s roommate – with which Bryce immediately took issue with, pointing out that the boy-prince of Trump’s court is like twelve years his junior. Berninger mock-corrected himself, saying it was actually Aaron, with which Bryce thanked for clearing his name – only for Berninger to then say Kushner taught Aaron how to play guitar solos. Later, before Violet’s “Bloodbuzz Ohio”, Berninger asked if there was anyone there from their home state, asking, “Everyone to move back to Ohio next year,” for the midterm elections, later honestly asking folks to move back home for two months and knock on doors, “We got fucked over last time, but we can win it back.” A noble sentiment, though perhaps the band should know by now that their fans are well out of college & post-college, too old to move back, now with families of their own in this blue state. 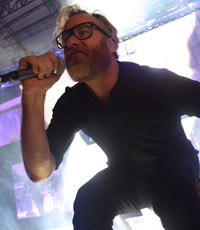 Songs not just from Alligator & Boxer but also Violet and Trouble have grown into classics, which got showcased as the crowd sang along to every word of the older numbers in the middle of the set. During Violet’s “Conversation 16”, Berninger pointed the mike to the crowd for the chorus of, “I’m evil!” Other than the slow & new “Carin At the Liquor Store” (also about Berninger’s wife Carin, who needed a new song with her actual name in it after Alligator’s “Karen” and it’s great chorus, “Fuck me and make me a drink”…), the back half was big and active, barely a moment to make the long walk to get another (pricey) drink, with killer pieces like Boxer’s “Slow Show”, “Apartment Story”, and “Fake Empire” (the song the girl behind your correspondent wanted to hear), Violet’s “Ohio”, and Trouble’s “I Need My Girl”. There was also Sleep’s rocking single “Day I Die”, and the band went into the encore break with a quite oldie, “About Today”, from their 2004 EP, Cherry Tree, a song of theirs likely a lot of people in the crowd had never heard. 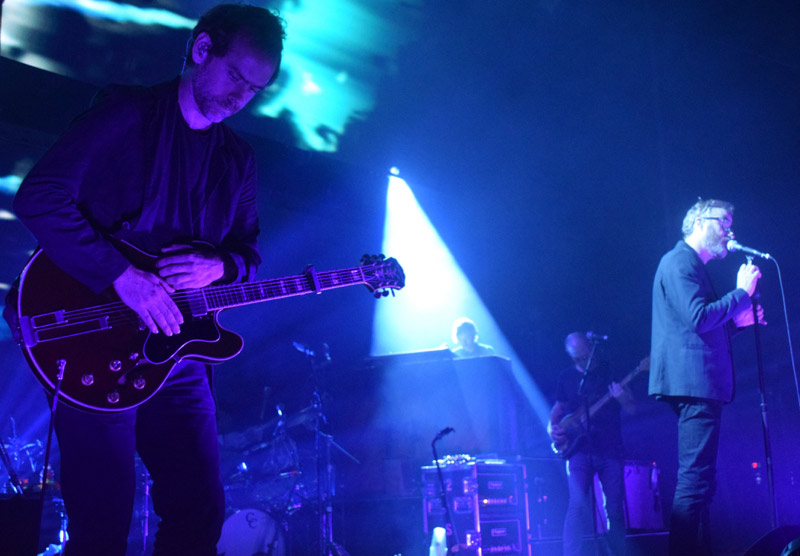 The National returned with guest guitarist Josh Kaufman for Trouble’s “Pink Rabbits”, a nicely more intimate open to the encore, before a particularly special moment. Berninger referenced that the borough is home to some greats, like The Ramones – but also Donald Trump. He then mentioned how punk icon Joey Ramone had once been in love with a girl, who went with Trump instead, “Wikipedia!” [note: the closest your correspondent could find on Wikipedia was that in the late nineties Joey developed a crush on CNBC reporter Maria Bartiromo, now of FOX Business, with a song about her on his posthumous Don’t Worry About Me 2002 record] Then the band launched into an absolutely awesome and elated cover of Ramones classic “The KKK Took My Baby Away”, with Berninger singing from the photo pit – “Ringie ringie ringie, the president / Find out where my baby went.” Even more appropriate Ramones cover than Reagan kiss-off “Bonzo Goes To Bitburg”. 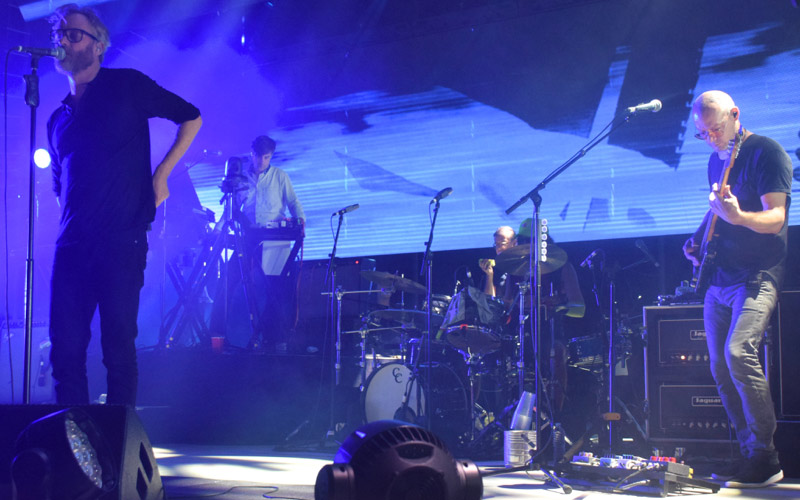 For a long time, maybe since the release of Alligator, that record’s “Mr. November” has been The National’s closer, and with good reason. It’s an epic and evocative call to action, which would often see Berninger go into the crowd, and has even been used as intro music for Obama himself (though not the chorus line of, “I won’t fuck you over / I’m Mr. November!”). After The Ramones, it served as a giant crescendo that easily could have been the closer once more – indeed, many exhilarated fans probably would have thought it was, if not for knowing that Forest Hills Stadium had a hard close at 10:00 PM, at it wasn’t that hour yet. Instead, The National somehow recovered to play Violet’s “Terrible Love”, which saw Berninger go into the crowd – way into the crowd, along the side VIP area all the way to the back entrances of the GA floor, his mike chord held aloft behind him as most could watch, but a lucky handful got to experience up close. 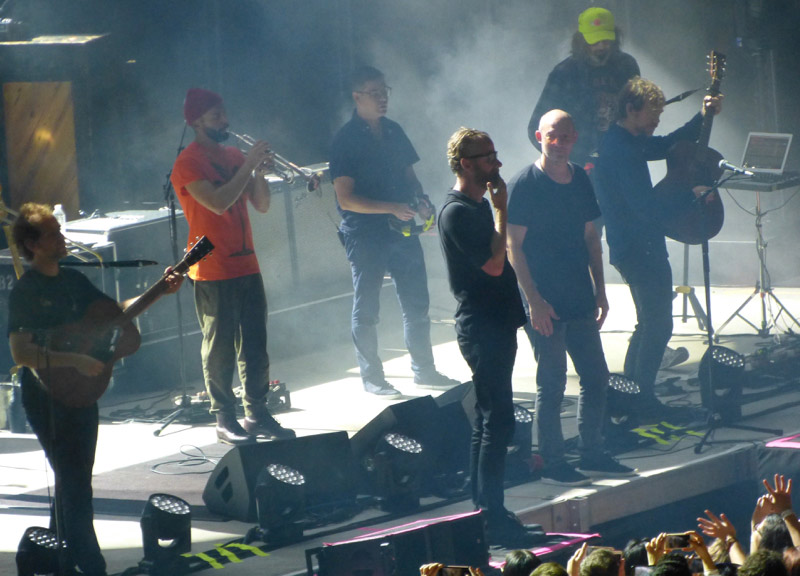 But even that wasn’t it. With the final minutes ticking away, the whole band (including a back on stage Berninger) walked up to the front of the stage, for an acoustic rendition of Violet’s “Vanderlyle Crybaby Geeks”. A sweet, sad, intimate piece, it was turned into a more uplifting sing-along, as the crowd did sing along. Berninger went into the photo pit one more time to sing the fans up front, and even turned at one point to sing towards Scott (QRO interview). 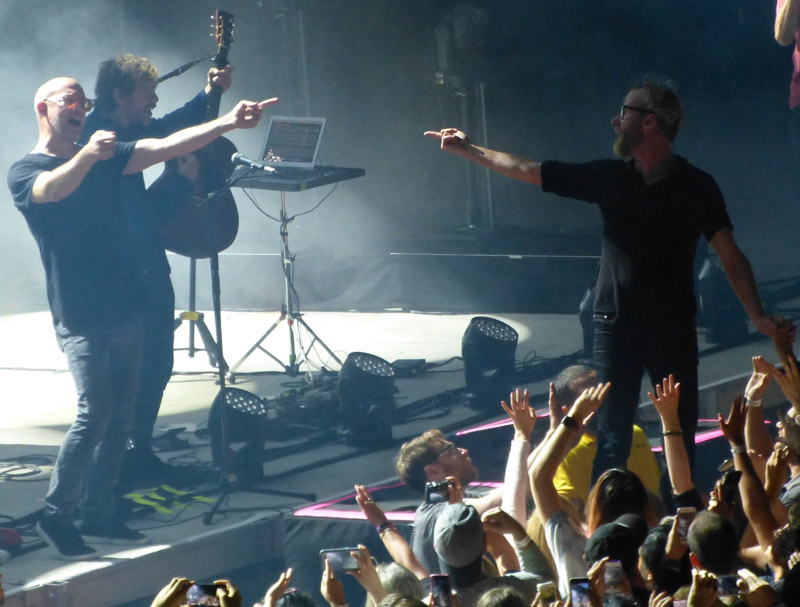 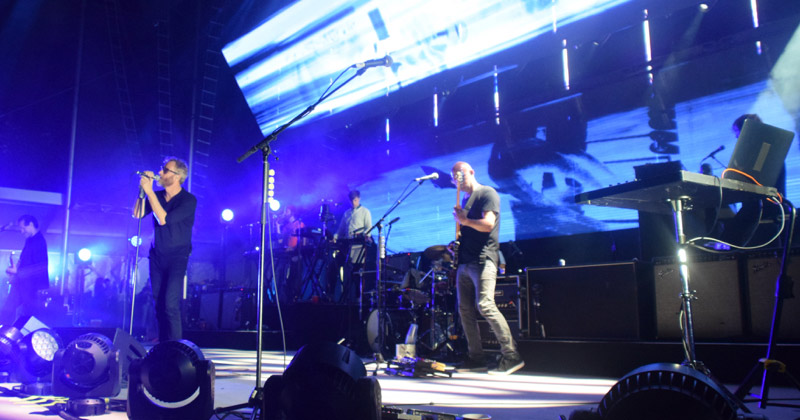