The National – Live in Atlanta

The National have always been a band with a generous dose of sophisticated, and sometimes dark male energy.... 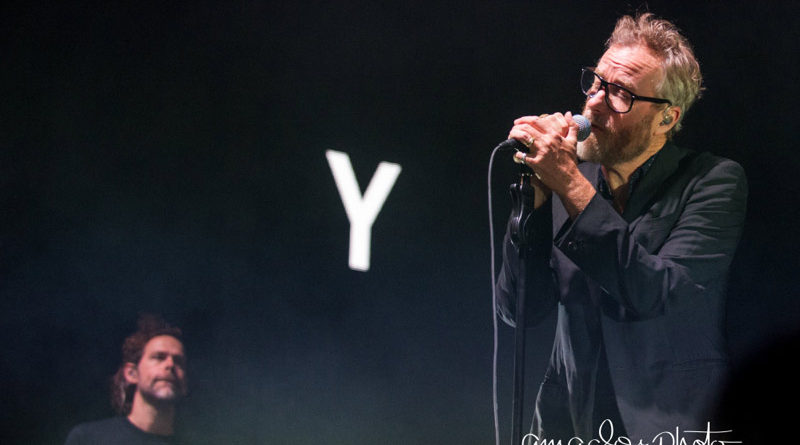 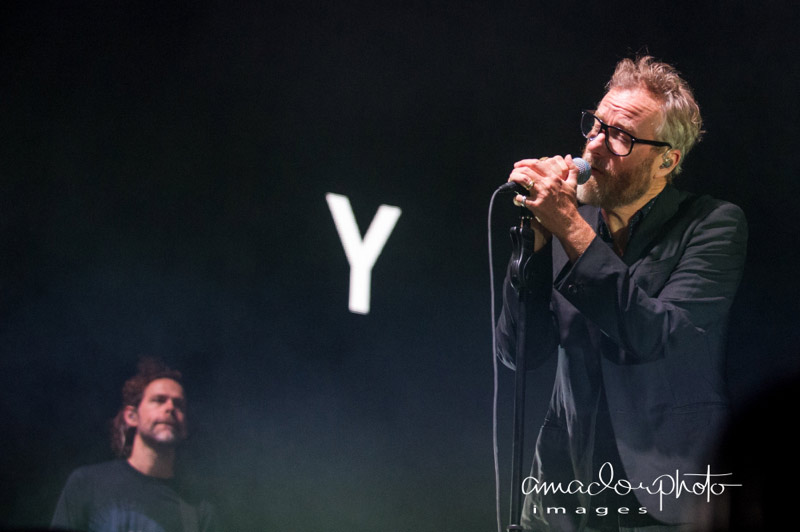 Click here all of QRO’s coverage of The National in QRO’s ‘Spotlight On : The National’ feature

The National have always been a band with a generous dose of sophisticated, and sometimes dark male energy. Their latest effort, I Am Easy To Find (QRO review), seems to have made a conscious veer toward a more feminine perspective, with a lineup of accomplished female vocalist to complement Matt Berninger’s world-wary baritone. (Berninger’s wife, Carin Besser, also served as lyricist for many of these new songs.)

For the most part, the album succeeds – which brings us to the band’s Sunday, June 16th tour date in Atlanta at the Coca Cola Roxy Theatre: Did it succeed? To borrow from an oft-used social media status option: It’s complicated. 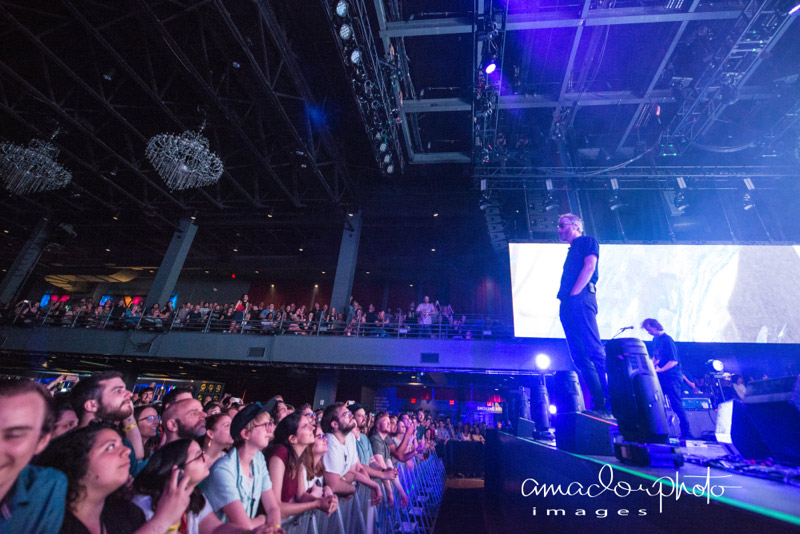 The stage was stark, but beautifully conceived, with three enormous screens exhibiting artful images from the short film that Mike Mills created to accompany the record and tour. The film temporarily ceded the screens to what seemed like warnings flashing, then an intimate view of the band emerging from backstage, building excitement for performance to come.

There was no “grand reveal” as the band took to the platform, but rather a workmanlike walk to their designated places. Berninger stopped at the center of a straight line of musicians who cut across the stage’s apron – a nod, perhaps, to a desire for parity among all players. He was flanked by featured vocalist Kate Stables (This Is the Kit), and twin guitarists (and music writers), Aaron and Bryce Dessner – with Bryan and Scott Devedorf in the background, playing drums and bass, respectively. 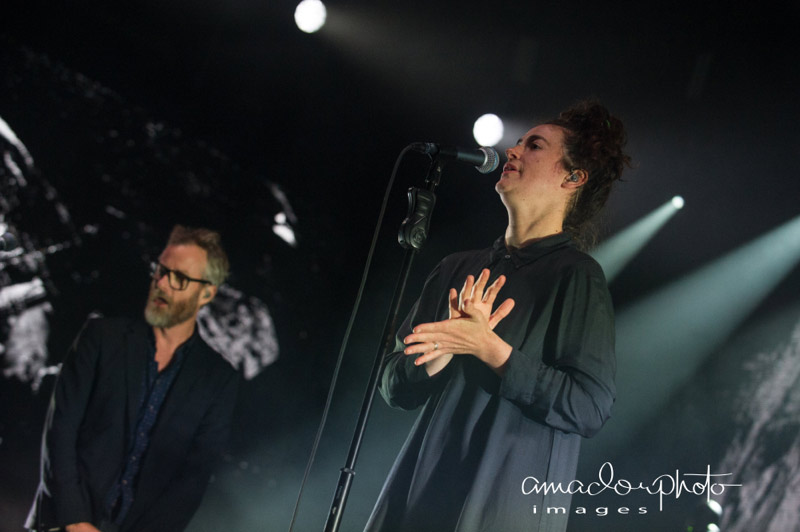 With no lead-up, Matt Berninger, the epitome of Brooklyn cool in his dark blazer, jeans and black horned-rim glasses, went about the business of beginning the show. “You Had Your Soul with You” started things off, with its techy guitar hook, and Berninger’s familiar, yet somehow lighter voice, soon joined by Stables (Ann Dorsey voiced the song on the album).

Both singers cut striking figures; the wiry, almost anxious energy of Berninger and the more earthy, low-key, kaftan-clad Stables – and if you closed your eyes, the two exuded pure harmony. With eyes open, however, they appeared to be in separate universes. 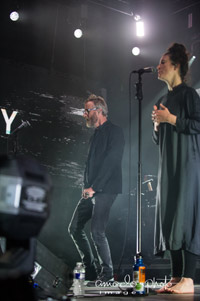 Berninger is a man who is clearly unused to sharing a mic – or a stage – and there appeared to be little chemistry and absolutely no interaction between the two singers, almost to the point of unease. They took turns at times singing and chanting through songs, each at their own mic stand, faithfully reproducing the sound on the album – but with seemingly little regard for each other. This isn’t entirely fair, of course. Women were purposely and thoughtfully included in this entire effort, and Berninger and Stables may well be close friends. This was just hard to detect, even as the evening – and the duets – continued.

From the beautifully orchestral, “Quite Light”, and slowly spiritual “Oblivion”, to the more intense sentimentality of “Hey Rosey”, and the poignant title track, “I Am Easy to Find”, Stables and Berninger emanated talent and passion with their voices – while somehow holding it back with their faces and bodies.

Once Berninger was on his own, he appeared visibly more comfortable (if comfortable could ever really be used to describe this famously-intense artist). With “Mistaken by Strangers” and “Bloodbuzz Ohio”, he arrived in familiar territory and seemed to find his inner “rock star.”

At once introspective, with arms crossed at his chest, and then open, standing on speakers and jumping down among his audience, his visage suggested that he is a man who may well be working through his demons on stage – but to the benefit of all who experience him.

As they made their way through “Graceless”, he and his band sounded tight and powerful, as they demonstrated and justified the fact that they have been together for two decades, and have no doubts about who they are.

When Stable rejoined the performance, for “Carin at The Liquor Store”, things seemed to fall into a less awkward, more collaborative rhythm as equilibrium returned to the scene. With their encore, The National made a forceful finish, which included crowd favorites; “Lemonworld” and “Terrible Love”, closing with the newer, but equally moving “Light Years”.

After twenty-two songs and a lifetime of musical proficiency, one could never feel they were cheated by The National. Their ability to surprise and enthrall, as well as somehow manage to be jaded and earnest, simultaneously, is unmatched. Given the noticeable lack of public obeisance toward the only woman on stage however, it was apt that this show was on Father’s Day – a day that distinctly celebrates the masculine. 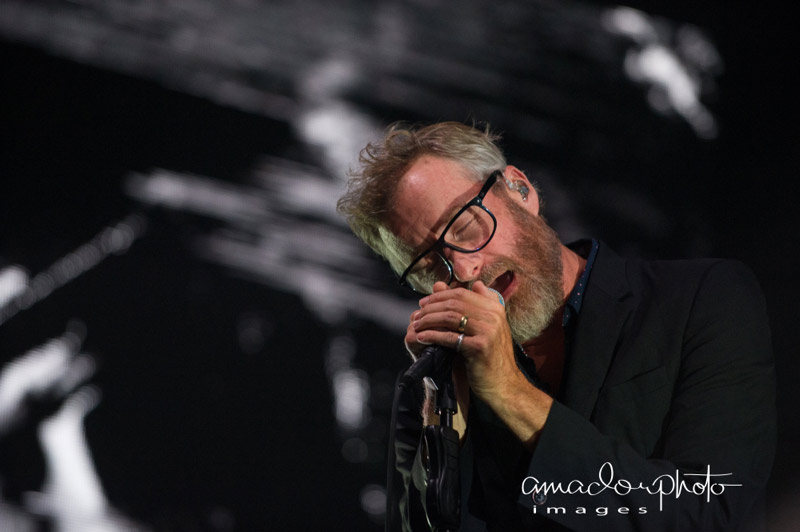 Set list
1. You Had Your Soul with You
2. Quiet Light
3. The Pull of You
4. Hey Rosey
5. Mistaken by Strangers
6. Bloodbuzz Ohio
7. Oblivions 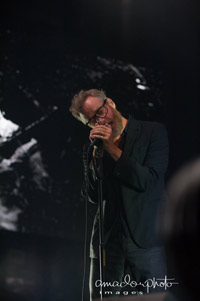 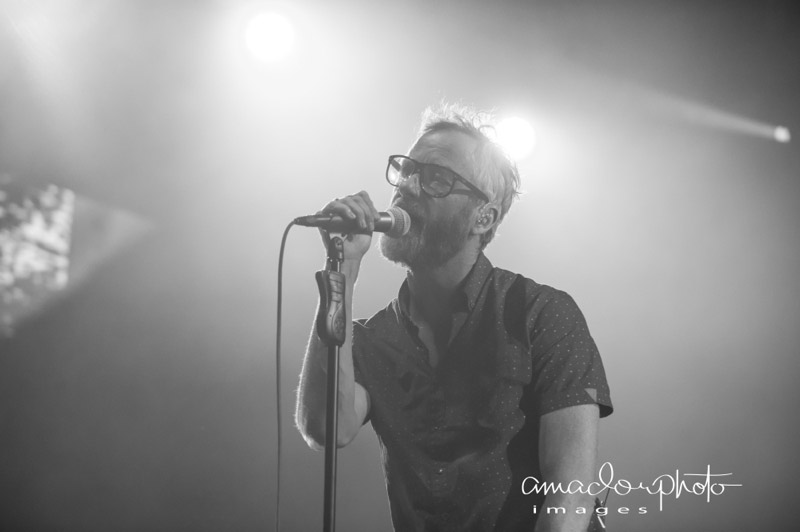