The Postal Service – Everything Will Change

At the start of this century/millennium, Benjamin Gibbard and Jimmy Tamborello began sharing music through the USPS, and the rest is history.... 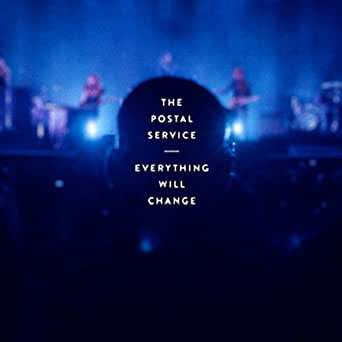 At the start of this century/millennium, Benjamin Gibbard and Jimmy Tamborello began sharing music through the USPS, and the rest is history. As The Postal Service with Jenny Lewis, their 2003 record Give Up was not a breakthrough upon its release, more seen as a one-off side-project from each members’ then-main gigs (Death Cab for Cutie, DNTEL, and Rilo Kiley, respectively). Yet it has had had one of the greatest late blooms of the 2000s, becoming a touchstone for those between Gen X and Millennials, practically defining the ‘indietronica’ genre. So, the band got back together ten years later for the big tour that they never did the first time around, including a deluxe edition of Give Up (QRO review), but no more, Gibbard saying definitely that there would be no follow-up album, or even more shows. But The Postal Service has just released their live album from The Greek Theatre in Berkeley, Everything Will Change.

Obviously, the world is very different from when Give Up came out, even from the reunion tour, but the songs still slap. This is a live album particularly for everyone who never saw The Postal Service, who will never hear their songs live outside of an odd Death Cab one-off or Gibbard early COVID livestream. By long before this point, many of the songs are classics in a way that one feels no songs can be anymore (but that’s been said during many eras), shared anthems whether live opener “The District Sleeps Alone Tonight” (we can only wish for that again), to the following all-too-relevant post-apocalyptic-pop “We Will Become Silhouettes”. It is notable that the live recording does not lose the lyrics, so often a problem, so such idiosyncratic topics as the Kennedy Assassination & global warming (“Sleeping In”) aren’t missed. There are some nice comments from Gibbard (“Who here’s had their heart taken out of their chest and stomped on?” before the duet where Lewis crushes him with “charts and graphs on why I have to leave,” “Nothing Better”). But even if just for new versions of songs you’ve played since you had them on CD, Everything Will Change justifies itself.

At sixteen tracks, Everything also gets in some non-Give Up. Admittedly, most of them were on the deluxe edition, such as the more electronic “Turn Around” or the catchy discotheque “A Tattered Line of String”. But there’s also the new-old cover of “Our Secret” by “the greatest band in the world,” Beat Happening (of course Gibbard would namecheck a Pacific Northwest alt-icon that never got their wider due, even if then said the next song, “This Place Is a Prison”,  was about his hometown of Seattle), and even DNTEL’s “(This Is) The Dream of Evan and Chan”, which Tamborello had asked Gibbard to guest-vocal on way back when, and started the whole team-up.

Even as everything changed this year, The Postal Service was touched in its own special way, from Gibbard pioneering the now-art form of at-home livestreams early on in the shutdown, to the endless jokes about the Postmaster General’s crimes towards that other Postal Service. The band even did a second Funny or Die parody video (after their first for the reunion), this time over Zoom (QRO review). While you can’t go out to concerts until still-who-knows-when, it’s a great time to sing along to “Clark Gable”, “Such Great Heights”, or the final lines to closer “Brand New Colony” that gave the live album its name, enjoy Everything Will Change.

Weezer – “All My Favorite Songs”