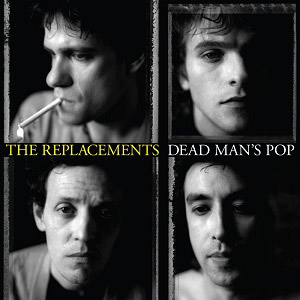 In 2003, Paul McCartney helped orchestra the release of Let It Be… Naked, a reworked version of their classic Let It Be, stripped of Phil Spector’s production work. There was a joke review in the Village Voice describing Let It Be… Naked as “Bassist Tommy Stinson finally getting his version of The Replacements’ Let It Be,” as the eighties alt-rock icons had indeed had a record with the same name. Now that joke comes almost real, as the band’s 1989 Don’t Tell A Soul gets its own stripped down version, Dead Man’s Pop.

The four-disc box set has three components, starting with the original producer Matt Wallace’s versions of the Don’t Tell a Soul songs, which supposedly singer/songwriter Paul Westerberg had preferred. When Soul was released, it was criticized by long-time fans for stepping away from their wilder earlier days (primarily that original wild guitarist Bob Stinson was replaced by Slim Dunlap), and praised by more mainstream reviewers for exact the same reason. Wallace’s mix tones down the changes, for a rawer, less power-pop album, less epic pop-rock, more cowboy-poet shamble. Most notable on poppier pieces such as “Talent Show” and “I’ll Be You”, it does draw away a bit from the better big songs like “Back to Back” and “Asking Me Lies”, in favor of the hootin’ jam “I Won’t” and dark “Anywhere’s Better Than Here”. The touching “They’re Blind” stands out even more, even slower, but “Rock ‘n’ Roll Ghost” works better starker. But overall, it’s not radically different by any means, as the group was still shifting into a more adult posture.

The second disc is ‘We Know the Night: Rare & Unreleased’. This includes Bearsville versions of “Achin’ To Be”, “Blind”, “Ghost”, “Darlin’ One”, and “I’ll Be You” that are more meandering (including some different lyrics on “You”). Most of the non-album tracks have been seen other places, such as the amazing second Nothing For All disc of classic greatest hits record All For Nothing, like “Portland” and “Ought to Get Love”, but there are a few never-released tracks, like the enjoyable rambling party “Last Thing In the World” and the intimate Westerberg acoustic “Dance On My Planet”.

But the real bonus is the session with none other than the ultimate cowboy poet, Tom Waits, and the team-up is just the gravelly blues-ramble you’d expect from Waits + Westerberg. That includes new pieces “Lowdown Monkey Blues” & “I Can Help”, both the rehearsal & full band performance (back-to-back) of “We Know the Night”, Wallace’s mix of previously released extra “Date To Church”, and Westerberg forgetting the lyrics to his own “If Only You Were Lonely” – and asking Waits if he knows them.

The final two discs is a live recording from University of Wisconsin in Milwaukee on June 2nd, 1989. Partially already released as a 1989 promotional EP, Inconcerated Live, this ‘Complete Inconcerated Live’ is, like pretty much all Replacements performances of that era, definitely sloppier than on record, but that was a part of their charm. By this point, they had enough of catalog to fill out a big show & leave you wanting more. They are some great moments, like Westerberg ragging on a faulty amplifier, the crowd’s shout-along to “Anywhere’s Better Than Here”, Westerberg introducing “Cruella Deville” (another classic extra) with, “This fucking Disney record we totally got tricked into doing,” an even wilder “I Won’t”, and more.

Like any reworked version of a classic by a band that isn’t around anymore, there’s the natural question of whether this was necessary for anyone but band members settling scores (that was certainly said about Let It Be… Naked). No, Dead Man’s Pop isn’t essential, especially as it’s not a reworking of one of their most classic records, and even among the extras & live material, much was already out there. But if you like The Replacements (and you should), you love The Replacements, and you’ll certainly enjoy this.