The Sea and Cake – Live

The Sea and Cake have always had a special place in your correspondent's heart (and stomach).... 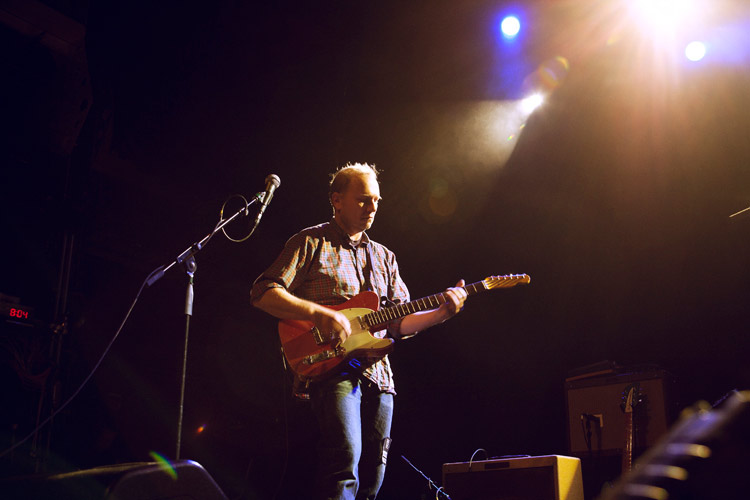 Just recently, the Federal Aviation Administration finally lifted the restriction on using electronic devices during flight takeoffs & landings.  It turns out, like most people had suspected, the emanations from an electronic device do not interfere with the airplane (still can’t make calls or access the internet for any of the flight, but baby steps – and no one wants to hear you talk on your phone at any point during a flight, anyway…).  In addition to being the riskiest time for life & limb during a flight, takeoffs & landings are also the riskiest time for you stomach, if sick, prone to motion sickness, or just hungover.  Whatever the reason you need to calm body and mind, there’s no better music to listen to as you plane leaves the ground or returns to it than The Sea and Cake, who came into New York’s non-tarmac Terminal 5 on Wednesday, November 23rd.

The Sea and Cake were on their second tour behind last year’s Runner (QRO review), but this was an opening slot behind Toro y Moi – bigger venue, but not necessarily their crowd.  Toro y Moi is a lot younger than the Chicago veterans – main Moi Chazwick Bradley Bundick has more hair on his head (QRO photos) than all of The Sea and Cake put together.  So it was a bit risky, playing in front of hipster chillwave youngsters, especially as The Sea and Cake didn’t exactly move around much on stage (save for jam during “Leeora” closer), not to mention the somewhat odd set-up of having singer/guitarist Sam Prekop all the way to stage right, not in the middle like most singers (even singers with stationary keyboards like Prekop are usually in the middle – like Bundick later that very night). 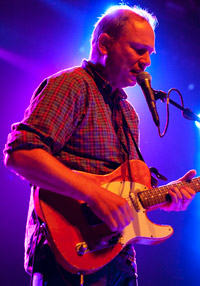 Admittedly, the first part of the set, largely devoted to Runner, didn’t get the crowd moving – maybe because they were still arriving at the always-starts-early Terminal 5 (QRO venue review), on the hardest night of the week to sell tickets, Hump Day (see Ra Ra Riot there two weeks earlier – QRO review).  But really getting the audience going was “Weekend” from prior release, Car Alarm (QRO review), thanks to its more tropical, and more dance, beat.  For all of The Sea and Cake being the old men on the wave, “Weekend” is the kind of song neo-tropical that artists like Tanlines only wish they could make.

Admittedly, your correspondent’s favorite of the evening was the following “Exact To Me”, from 2007’s Everybody (QRO review).  The first Sea and Cake record he ever heard, it’s held a special place in his heart, as the music he listens to whenever he’s sick, suffering from motion sickness (which he is prone to), or hungover (which he’s also prone to…).  In fact, there might not be a record/artist that he’s listened to more since starting here.  And now he can even listen to them when touching down after a long trip to South-by-Southwest, or flying out from SXSW after some wild nights…