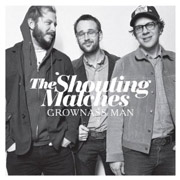 Justin Vernon is a busy guy – ridiculously busy, in fact.  Just take a gander at his discography on Wikipedia.  It includes albums released by ten different acts!  Obviously, he is most well known for being the leader/founder/lord of the indie giant group Bon Iver (QRO live review), but he is rapidly making a name for himself elsewhere.

His latest musical endeavor is called ‘The Shouting Matches’ and it clearly indulges his blues-rock tendencies.  Bon Iver’s second album was a bit of a melting pot of different musical styles (QRO review), but apparently Vernon’s mantra is, “Let’s create a band for that!”

All joking aside, the debut album by The Shouting Matches, Grownass Man, is a good album.  Is that too simple?  Perhaps, but it’s really just a straightforward blues-rock album that happens to be good.  Think Bonnie Raitt (QRO album review).  In fact, I don’t think it’s any coincidence that Vernon appears to be channeling Ms. Raitt with this band as he did an amazing cover version of her popular “I Can’t Make You Love Me” as a b-side of Bon Iver’s “Calgary” single.  He and longtime collaborator/Bon Iver drummer Sean Carey also did a hauntingly beautiful live version of the song for a 4AD/Jagjaguwar Sessions series last year.  It’s clear that Justin loves him some Bonnie.  She’s hard not to love, really.

Anyway, there are some standout tracks on Grownass Man.  Take “Heaven Knows” for instance.  It’s a really gritty, harmonica-riddled track that just gets nasty in terms of chunky guitars and muted vocals.  It then fades into another great track, “Mother, When?”, which is a mover and a shaker of a song and really showcases Vernon’s vocal abilities.  There’s also the album’s closer, “I Need a Change”, which is one heck of a slow jam.  It is, quite simply, an extremely slow-tempo guitar-driven ode to relationships past.  It is a classic example of how intricate instrumentation does not have to be the basis of a truly great song.

So there you have it: Justin Vernon’s The Shouting Matches.  They are gaining popularity and even had a slot at this year’s Coachella.  So for those of you who wish Vernon would stop screwing around and start work on the next Bon Iver record (myself included), the other projects he is working on are doing well.  He can do what he wants; after all… he’s a Grownass Man.

Bang On a Can Marathon Photo Gallery