The Sounds are never gonna win over the Williamsburg crowd, despite being from Sweden.... 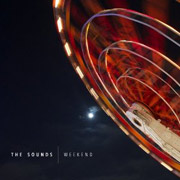 It’s very easy for hipster-haters to discount acts without irony, tragedy, or alcohol.  Unless you’re a party-rock garage band, one needs to either comment wryly on matters, or dig deep into the depths of depression.  That’s because most of the acts that play things straight up, or at least the most visible ones, are über-popular, über-wide appeal artists that we’re all über-sick of.  But Sweden’s The Sounds are honest through-and-through in their rock ‘n’ roll on Weekend.

The title kind of tells you something already about The Sounds, that they’re the kind of group that wouldn’t use the word ‘Weekend’ for either sarcasm or about praising da club.  Instead, the album’s titular track is wrought about “living for the weekend.”  While the preceding “Hurt the Ones That I Love” is admittedly a little overwrought, “Weekend” is honest and memorable.  The group actually mainly goes upbeat on Weekend, from catchy opener “Shake Shake Shake” to dance-rock anthem “Young and Wild” to close.  Unlike 2011’s prior, synth-heavy Something To Die For, Weekend returns to the band’s rock core (a wise move) in tracks like “Take It the Wrong Way” and “Outlaw”, though with some catchy beats on such songs as “Shake”, “Too Young To Die”, “Animal”, and “Emperor”.

The Sounds are never gonna win over the Williamsburg crowd, despite being from Sweden.  But they don’t need to when they stick to what they do best.