In the nineties NYC alt-scene, the artwork of Steve Keene was ubiquitous.... 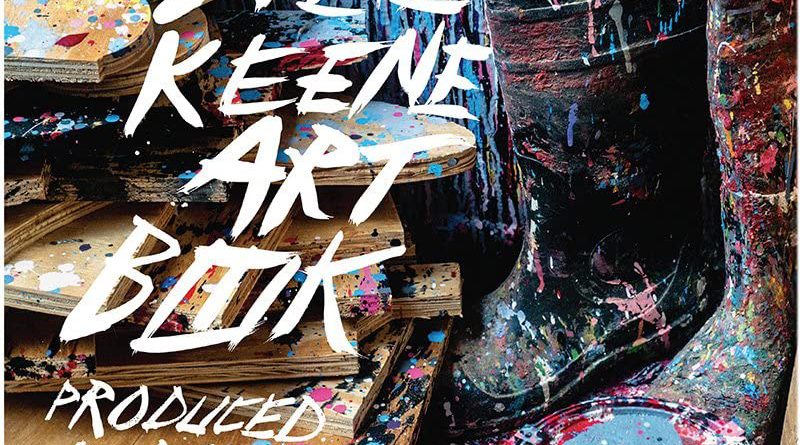 In the nineties NYC alt-scene, the artwork of Steve Keene was ubiquitous. Some of that came from his unique way of making art, many copies of a single painting on woodcut, sold for as little as five dollars – in addition to just the inexpensiveness of his output, there was its DIY aesthetic. And he made many, many paintings. His artwork found fans (and album covers) for the likes of Pavement, The Apples In Stereo, Silver Jews, and others. But even as the nineties alt-scene moved on, Keene moved forward, still producing at a prodigious rate – and garnering attention from the art world, such as super-fan Shepard Fairey putting on exhibits of his work. And now comes The Steve Keene Art Book, put together by Daniel Efram, a gorgeous and in-depth look at perhaps the most prolific artist of all time.

Like any art book, first and foremost is the art found inside the book, and The Steve Keene Art Book looks very nice. As glossy as anything you’d see sold in The Met’s gift shop, one of the book’s missions was to document an artist who has never been truly fully documented (noting that even Keene himself doesn’t keep good track of all of his work), from paintings to postcards. There’s an incredible collection of his album art tributes, from Arcade Fire to Tom Waits. There’s all of his ‘Presidents’ series (pictures of actual U.S. presidents – don’t worry, it ends with Obama…). There’s his more recent Computer Numerical Control-created Tattooed Plywood. It might be slightly ironic that a book about him is fancier than anything that the down-to-earth artist has ever done, but this is to give him his proper respect and due. And the book, made in the size of records to fit in your LP collection, is pitched towards longtime Keene fans, who might have bought his artwork back when because it was cheap, but by now they’ve got a good income and can afford a glossy art book (or Pavement reunion tickets…).

While many will likely flip through the book for the great pictures of not just Keene’s artwork but Keene himself, there is a healthy amount of text detailing Keene’s work and life, from those who have known him. Journalist Karen Loew gives a synopsis of Keene’s long arc from being an integral part of the University of Virginia scene (despite not actually going there) on up to his now longtime home of New York City. Novelist Sam Brumbaugh describes hosting indie shows at his Threadwaxing Space that were decorated by Keene (the painter was more prompt & professional than most of the musicians). Ryan McGuiness’ The Whitehot Magazine for Contemporary Art article & interview details Keene’s singular process (“What Raymond Pettibon is to punk rock, Steve Keene is to indie” – there’s also a comparison to The Joy of Art’s iconic Bob Ross). There are numerous quotes from admirers (of course the greatest is from Superchunk & more’s Jon Wurster).

Hopefully, you already have some Steve Keene artwork in your home (if not, go to his website and order six random paintings, for only $70.00, shipping included). You’ve undoubtedly gotten many times their initial cost in enjoyment. You’ll never own, or even see, all of Keene’s work, but will get the Steve Keene experience in glossy form with The Steve Keene Art Book.

If you’re in New York City, check out the Steve Keene Art Show at ChaShaMa in Brooklyn, running September 13th to October 14th