The Twilight Sad are prone to wallow in a particular brand of Scottish moroseness.... 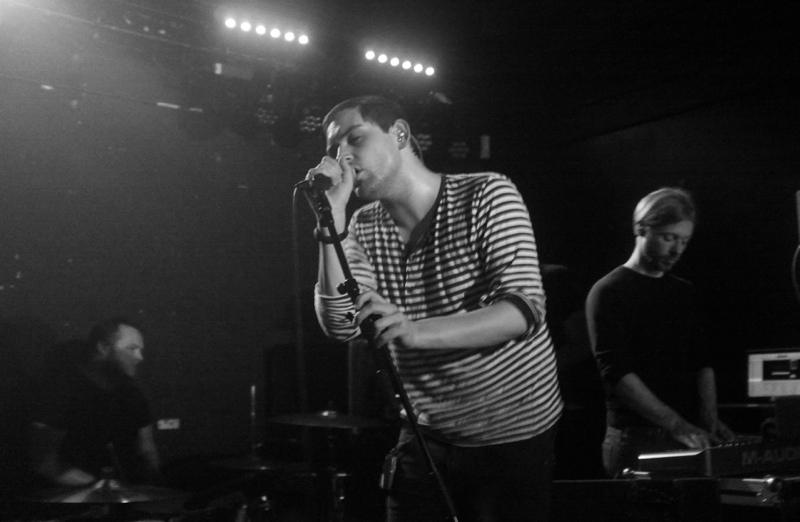 The above proclamation from The Proclaimers was a none-too-subtle swipe at the then crop of Scottish bands that were adopting an Americanisation of their vocal style, which allowed them to be more acceptable on the other side of the pond. The Twilight Sad approach their vernacular in a comparable style, but whereas the Reid twins from Leith spoke of lost love and long walks, The Twilight Sad are prone to wallow in a particular brand of Scottish moroseness. This self-defacing attitude is prevalent in modern Scottish literature as well as music; who can forget the particular rant by the Renton character in Irvine Welsh’s Trainspotting when he declared, “It’s shite being Scottish, we are colonised by wankers” [the English]. Iain Banks in his tale of rock and roll excess (Espedair Street) has a character called Danny Weir (Weird), who has the world at his feet but is still as miserable as sin. Twilight Sad manage to attain the next level of miserablism, dealing with subjects as deep and dark as childhood neglect and desolation, even two of the three cover versions on the limited edition Killed My Parents and Hit the Road album are by the Manchester doom and despair duo, The Smiths and Joy Division. The band’s musical progression over the four albums has been nothing less than momentous, evolving from a roaring war of attrition sound on their first album (QRO review), via a more stripped down sound on the second (QRO review) and into a more repetitive electronic approach assisted by the mercurial Andrew Weatherhall by the third (QRO review). The three core members of James Graham (vocals), Andrew MacFarlane (guitars) and Mark Devine (drums) have created an aura of singular belief in the virtuosity of their art, that is reflected in the further maturation of their sound on the forthcoming new album Nobody Wants To Be Here and Nobody Wants To Leave, which is soon to be released on Fat Cat records. 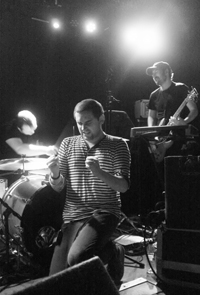 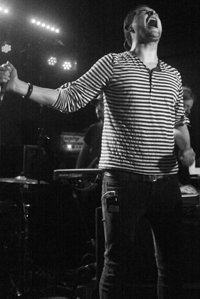 The appearance at the Bodega, Nottingham on Tuesday, 7th October, was less of a performance and more of a shamanic ritual. The word “performance” conjures up visions of rehearsals, planning and presentation of a neatly packaged product and that was far from the case. Augmented by bass guitar and keyboards for their live dates it was still McFarlane’s Fender Jaguar which with constant use of the tremolo arm created a crescendo of noise akin to My Bloody Valentine, but with more subtlety and grace that created the twitches and jerks in Graham’s vocal delivery. As with all great bands such as Joy Division and The Doors (and believe me, Twilight Sad belong in this category) the musicians had that ability to coax and cajole, to push and to force the vocalist to enter that almost catatonic fugue state. In this state involuntary angular movements and the rolling of eyes became commonplace. This happened time and time again leaving Graham exhausted and his only respite was when each song ended, which allowed him a brief interlude to return to the fold. They opened with the new single “Girl In the Corner” and preceded to select tracks from the entirety of their back catalogue, resulting in an almost inverse exorcism where the deity was not removed but musical shards were forced into the soul, which became part of the id forever. “Rock is dead” is the current cry from the apathetic masses, but on that form The Twilight Sad could murder it and then with their sheer will and courage and the briefest of kisses breathe eternal life back into its bloated corpse.