The Wedding Present have always played the game on their own terms.... 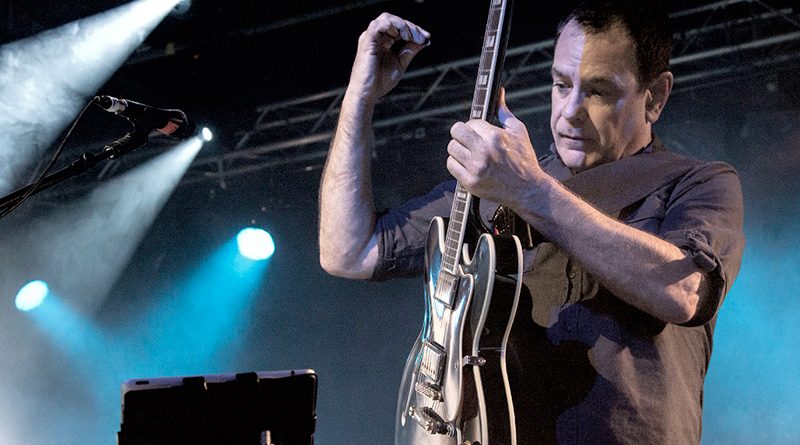 Newton’s first law of motion states that an object at rest will stay at rest, and an object in motion will stay in motion unless acted on by a net external force.

Click here for photos of The Wedding Present at Rock City in Nottingham, U.K. on October 17th, 2015 in the QRO Concert Photo Gallery

Click here for photos of The Wedding Present playing Seamonsters in its entirety at 2012 Primavera Sound Festival in Barcelona, Spain in the QRO Concert Photo Gallery

Click here for photos of The Wedding Present at SXSW 2012 in Austin, TX in the QRO Concert Photo Gallery

Click here for QRO’s review of The Wedding Present playing Bizarro in its entirety at O2 Academy in Bristol, U.K. on November 21st, 2010

Click here for QRO’s review of The Wedding Present playing Bizarro in its entirety at South Street Seaport in New York, NY on August 13th, 2010

Whereas most bands, when approaching the questionable process of an anniversary tour for an album, they usually choose either the one that has defined the band’s sonic output throughout their career, or the one that has peaked in the relevant charts and shifted the most units. The Wedding Present have always played the game on their own terms and the choice of Seamonsters released in 1991 should come as no surprise, being that it sold poorly compared with its predecessors. The Wedding Present’s first two albums, George Best released in 1987 and Bizarro released in 1989, meshed the then current vogue for jangly guitar pop with a more aggressive slant akin to what was going off stateside, namely Sonic Youth, Pixies etc. The above Physical Law is the perfect analogy for the shift in direction for the band, with the net external force in this instance being the larger-than-life producer Steve Albini, who had cut his teeth with the seminal Surfer Rosa album by the Pixies. Albini’s trademark style was and still is to focus on the drum sound to the detriment of the vocals, whilst adding an overdriven wall of guitar noise to the final mix, which he applied to Seamonsters and in doing so moved the Wedding Present sound sharply away from the noisy pop of the first two albums. Albini also worked the band at his usual ferocious pace with often everything achieved in one take, resulting in the album being completed in a week compared to two months for Bizarro. The resulting production gave Seamonsters a darker nuance than the first two albums with the Velvet Underground, Joy Division and Wire all being cited as influences in the original reviews. David Gedge has been the only constant in the timeline of the Wedding Present and recently commented that he, “Feels he has been a series of different bands,” and although he doesn’t appear as cantankerous and as dictatorial as Mark E Smith, the Fall comparison still holds up with Gedge being as addicted and obsessed with his band as the late great Mancunian.

The running order of the evening, Saturday, November 20th at Nottingham’s Rock City, as in all the dates on the current tour of the United Kingdom and Europe, was split into two distinct halves with the first taking care of the anniversary performance of Seamonsters in its chronological entirety. The second half was a mixture of classic tracks, singles and a couple of unreleased songs thus pointing to a rebirth after the celebratory airing of old favourites. Seamonsters was performed with an almost brusque and dismissive air, which was highlighted by the zero interaction between tracks and the use of minimal lighting, that allowed the band to hide in the shadows along with the ghosts of the old material and departed band members. It almost felt like a cathartic necessity for Gedge, which would allow him to shed the skin of the old material thus allowing his muse free reign to once more create and move inexorably forward.

The second half of the show was the complete antithesis to the first, with the jocular between song banter returning along with the warmer primary colours emanating from the lighting rig. The abrasive edge was dismissed as they ripped through crowd favourite’s such as “Kennedy” and “Brassneck”, as well as the debut of a couple of new songs which will undoubtedly feature in next year’s 24-song project, a repeat of the 1992 release of two tracks a month for the entire year. The aforementioned Mr Smith described the pantomime exercise of nostalgia as “only fit for the look back bores,” which is a philosophy that Gedge subscribes to, but which also sits comfortably alongside his main mandate to create and move onwards, only occasionally looking back to see how far he has travelled.

Houndmouth – Good For You