Rock titans The Who kicked off their long-delayed ‘The Who Hits Back’ North American tour at Hard Rock Live in Hollywood, Florida.... 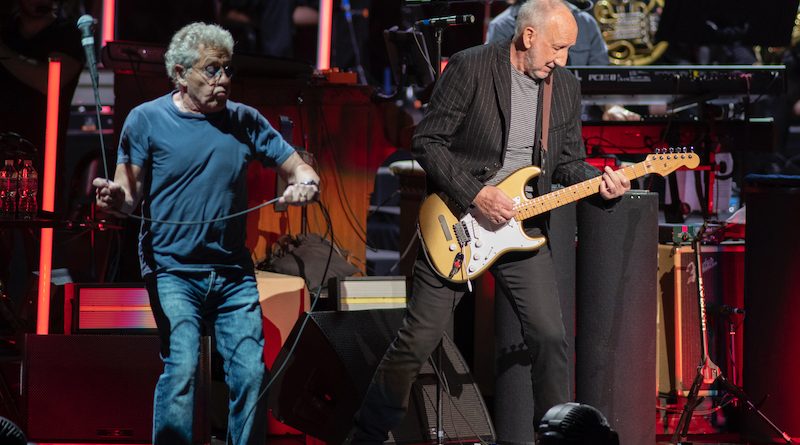 Click here for QRO’s live review of The Who at Madison Square Garden in New York, NY on September 1st, 2019

Click here photos of The Who at Madison Square Garden on May 13th, 2019 in the QRO Concert Photo Gallery

Rock titans The Who kicked off their long-delayed ‘The Who Hits Back’ North American tour on Friday night, April 22nd, at Hard Rock Live in Hollywood, Florida. Featuring three sets, a symphony orchestra, and acoustics numbers, the band did not disappoint.

From the very beginning, it was obvious that this was not going to be a phoned-in classic rock nostalgia act. The band, featuring an all-star lineup of talented musicians strolled onto the stage in front of a massive symphony orchestra that dominated the stage. The first and third sets consisted not of songs that were rearranged for orchestra, but those that were originally recorded with an orchestra or with strings. The ensemble felt right at home backing up the band on almost every song.

The setlist was as always varied, featuring the hits as well as several deep dives into the obscure. The first set featured the full orchestra and started with the classic “Overture”, as the band proceeded to play five more from Tommy before reaching into other albums.

Set two saw the orchestra take a break and featured just the band save for violinist Katie Jacoby and cellist Audrey Q. Snyder. This is where a lot of the magic happened. The stripped-down numbers highlighted the musicianship of the band and let the players shine. Starting with “Substitute” and ending five songs later with “Behind Blue Eyes”, this set was the biggest hit. A crowd favorite was “Won’t Get Fooled Again” featuring Roger Daltrey and Pete Townsend alone and acoustic.

Set three brought back the orchestra and more hits including a sublime “Love”, “Reign O’er Me”, and a house-rocking “Baba O’Riley” to close out the night.

The band lineup does bear mentioning as this was a group of very talented players. Without further ado here they are.

If this was any indication of what’s to come on this tour there will be many, many happy fans.

(without orchestra)
Substitute
The Seeker
I Can See For Miles
The Kids Are Alright
Won’t Get Fooled Again (acoustic) (Pete and Roger alone)
Behind Blue Eyes (featuring violinist Katie Jacoby and cellist Audrey Q. Snyder)

(with orchestra)
Ball And Chain
The Real Me
I’m One
5:15
The Rock
Love, Reign O’er Me
Baba O’Riley