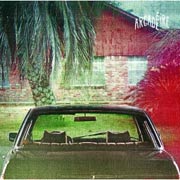 Flashback five years, and The Arcade Fire found massive success & acclaim off of their debut full-length, Funeral, as the Montreal act helped introduce collectives, Canada, and orchestras to the indie-world and even the mainstream.  Flashback three years, and The Arcade Fire, after touring massive places on the back of follow-up Neon Bible (QRO review), declared they were taking a break – and meant it.  The past few years has seen nothing from the group, and only in the middle of 2010 have they returned, first with shows in Canada culminating in headlining their hometown Osheaga Festival, then their first U.S. show since 2007 on August 1st in Boston (QRO photos) before playing two nights at New York’s famed Madison Square Garden (QRO venue review) – and, in between, putting out third LP The Suburbs, the most anticipated new record of the year in the alternative music world.  Arcade Fire’s return will never match the heights of their debut, but is a more even affair – however, the most interesting aspect is the way that The Suburbs is a return of sorts to the lands that the band left in Funeral, even as they find that you can’t go home again.

Click here for photos of The Arcade Fire at 2011 Main Square Festival in Arras, France in the QRO Concert Photo Gallery

Click here for photos of The Arcade Fire at Madison Square Garden in New York, NY on August 5th, 2010 in the QRO Concert Photo Gallery

Click here for photos of The Arcade Fire in their first U.S. show in three years at Bank of America Pavillion in Boston, MA on August 1st, 2010 in the QRO Concert Photo Gallery

Click here for photos of The Arcade Fire headlining 2010 Osheaga Music Festival in their hometown on Montreal, PQ, Canada in the QRO Concert Photo Gallery

Click here for QRO’s review of The Arcade Fire in one of their last U.S. shows before their break at Randall’s Island in New York, NY on October 6th, 2007

Click here for photos of Arcade Fire at Orpheum Theatre in Boston, MA on May 10th, 2007 in the QRO Concert Photo Gallery

Amidst all the interesting things about Funeral, one notable theme was that of children literally running away from home, most prominent in the series of “Neighborhood” songs, abandoning their parents’ houses & names for nature & imagination, like a twenty-first century Where The Wild Things Are.  The Suburbs sees these children returning to these homes, only to find them abandoned and gone by the end of the record in “Sprawl I (Flatlands)”, “Sprawl II (Mountains Beyond Mountains)”, “Suburban War”, and “The Suburbs (Continued)”.  Other tracks detail these lands without youth & what happened, from the titular opener through “Empty Room” and “City With No Children”.

Not that The Suburbs is a ‘down’ record – certainly not entirely, as The Arcade Fire is too ambitious and expressive a band to stick to one outlook.  Indeed, The Suburbs has a starker divide between its orchestral & atmospheric side and its the rockin’ press aspect than ever before.  “Month of May” is the most pushing rock song The Arcade Fire have ever produced, yet it is followed by sweet little sway ditty of “Wasted Hours”.  However, this does see the momentum of “May” “Wasted”, just as “Half Light I” does after “City With No Children”.  And this divide also produces songs that are simpler than what The Arcade Fire have done before, whether the rock of “May” or the orchestral sway to “Deep Blue”, but the band doesn’t have a track with both.

This divide does not, however, produce a record divided between greatness & also-rans.  Neon Bible couldn’t produce songs as great as the greatest of Funeral, but also didn’t have a skippable track, either, and The Suburbs continues this way, only more so: no piece isn’t fine, strong, good, but only a few come close to the band’s absolute greatness.  “Sprawl II” is the best output to-date by co-frontwoman Reginé Chassagne (though some of the synths are a bit eighties cheese), but she has always been weaker in her output than husband/frontman Win Butler.  While the finish to The Suburbs is the most thematically interesting section of the record, musically it is the beginning that is the best, as after “The Suburbs” re-introduces you to the band you fell in love with at a Funeral five years ago, “Ready To Start” kicks that romance into full gear.  Epic in all the right ways, yet still pierced with sadness, “Start” can stand toe-to-toe with any song in the “Neighborhood” (though a little less orchestral, a little more electronic and rock – like “Sprawl II” and throughout The Suburbs, synths are not as fully integrated as everything else).  And “Modern Man” & “Rococo” follow in sadness that is no less powerful for being a bit simpler.

What made Funeral so great was that it was a deeply involved emotional journey and an instantly enjoyable alt-rock album, both grand and complex orchestral arrangements as well as accessible tunes.  The Arcade Fire will never again construct that exact pitch-perfect formula, but discovering that you can’t go home again, that the home you remember is no longer there (and that might be thanks to you leaving it) is a powerful discovery in and of itself.  And on The Suburbs, is something the listener and The Arcade Fire share together.