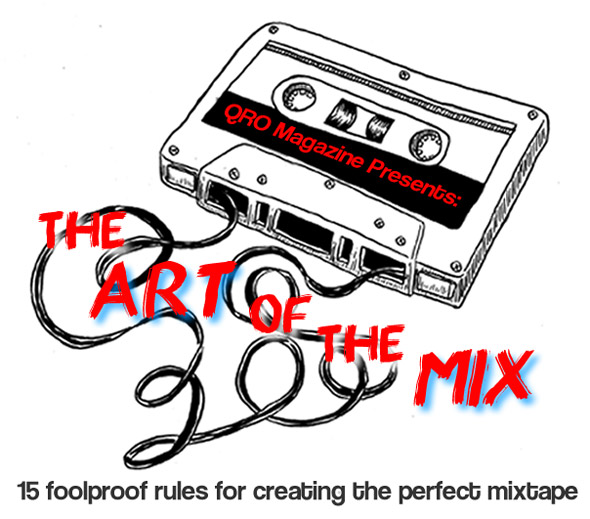 Making a good mixtape is a very subtle practice, and takes a certain amount of skill.  Needless to say, there are many do’s and don’ts.  Here are some rules on creating the perfect mixtape – to ensure you win the hearts of all who listen:

1) Always refer to as a ‘mixtape’.  One word, no spaces.  It doesn’t matter if you are making it on a tape or a CD – always call it a ‘mixtape’.  This is not just a case of semantics and word choice; it actually comes down to Basic English.  Mixtape is a noun and means, "a compilation of songs recorded in a specific order."  Whereas if you call it a ‘mix CD’ or a plain ‘mix’ or even ‘mix tape’ (with a space) you are giving it a whole different meaning.  The word mix indicates randomness and an unsystematic blend.  You are not creating a mix of songs; you are making a calculated selection.

Plus calling it a mixtape adds a nostalgic sense of romanticism since nobody really uses tapes anymore.

2) Know your target.  A mixtape is a very personal thing; so don’t make one for a stranger.  You must know at least the bare essentials of their music taste (e.g. whether or not they like rap, or hate The White Stripes) before you begin their mixtape.  For example, you are making a mixtape for a person you meet at the record store.  You add a number of grunge songs based on their unkempt appearance, but it turns out this person is a diehard R&B fan and finds your selection of Pearl Jam, Soundgarden and Nirvana loud and annoying.  So do yourself a favor and get to know the person before making them a mixtape.

3) Have some knowledge of music.  A mixtape is not something for the musically autistic.  If your music taste is "whatever is on the radio," then you probably should not be making a mixtape.  Seriously, nobody wants a mixtape full of top 20 hits.  If you add Justin Bieber or The Black Eyed Peas to your mixtape you will impress nobody.

4) Select a theme.  Mixtapes should always be themed.  You want there to be fluidity and cohesion – not just a random collection of songs.  Using a theme throughout will unify the entire mixtape and make it feel so much more special then a selection of singles.  Themes don’t necessarily have to be complex.  "A few of my favorite songs" is a theme that is basic, but will work.  Usually themes relate to lyrics or song-titles.  A mixtape could be comprised of songs that have the word "girl" in the title.  Or songs about summertime.  Another option is the genre mixtape, where all tracks are similar genres.  The possibilities are endless.

To me, making a tape is like writing a letter – there’s a lot of erasing and rethinking and starting again.

"  And this is very true.  You will not get it right first go.  We have the luxury of dragging and reordering music in iTunes, so try a few different combinations before you select the "Burn Disc" button.

6) Start and end with a bang.  The first and last tracks are arguably the most important on your mixtape.  The first sets everything up, and either draws your listener into your meticulously crafted world, or slams the door in their face.  So start with a track you know they will love.  You usually want to start with an upbeat number, something with a catchy and infectious melody.  The last track wraps up your whole selection of songs and leaves the listener with a final impression.  You want the mixtape to feel complete, finished and whole – not like you just ran out of space.  It is often good to use an epic, longer track that builds to a crescendo finish.  Just remember to choose songs that your listener will enjoy for first and last tracks, because these are the songs that will be remembered most.

7) When in doubt, keep it short.  There is nothing worse than a mixtape that overstays its welcome.  You do not want to cram in tracks just to meet the 80-minute time limit on a CD.  There’s nothing wrong with only having six songs on a mixtape – six songs that flow and complement each other is far better than 18 songs that sound like they were strewn together by a man with the precision of a double amputee.

8) The rule of repeating artists.  This has always been a very tough and controversial rule – whether or not to repeat artists on a mixtape.  As a general rule, do not repeat the same artist more than once.  But there are some exceptions.  You can repeat artists if: the entire mixtape is done in pairs of artists or if a track requires a following track (e.g.  "Sgt. Pepper’s Lonely Hearts Club Band" should be followed by "With a Little Help From My Friends").  Also it is okay to open and close with the same artist.

9) Mix it up.  Despite what was said about not wanting a random selection of songs, it is no good making a mixtape of completely similar tracks.  There needs to be some variety.  If you have a song that is slow and morose, do not follow it by another equally depressing song.

You do not want your listener getting bored (or suicidal) from too many slow and sad songs.

So mix it up, but make sure there is still a steady and logical flow.

10) Always aim over your head.  Giving a mixtape is all about creating an image of how musically educated you are.  So try and make yourself seem more knowledgeable than you are.  Give the impression that you have the largest record collection around.  Subtly draw attention to song’s obscurities by using parenthetical qualifiers – e.g.  "(alternate take)", "(original edition)", "(extended cut)".  Feel free to use remixes, and live versions of songs.  It makes you seem more in the know, but also breathes new life into old favourites.

11) Name your mixtape well.  You should always name your mixtape.  Even if it is just "So-and-so’s Mixtape Vol. 1" – it adds a personal touch to it.  Would advise you to always add the words "Vol. 1" to the title of the first mixtape you make for someone.  This shows that there are more mixtapes to come, which is an exciting prospect for a first time mixtape receiver.  Naming your mixtape is also a good way to state the theme.  One of the best mixtape titles I have ever seen is "(T)rain" – all the songs on the mixtape were either about trains or rain.

12) Create custom cover art.  It is imperative to give your mixtape cover art.  This is the first thing someone sees when receiving a mixtape and it immediately sets the tone for whatever music lies within.  The phrase "don’t judge a book by its cover" does NOT apply here.  You should definitely judge a mixtape by its cover.  And be creative – do not just print out a picture of a cassette regardless of the irony factor.  Whether you create it on your computer, or by hand, a well-designed cover is essential for any mixtape.

13) The giving of the mixtape.  While you are handing over your completed mixtape to its lucky recipient, give hints on how hard you worked on the mixtape, or how long it took you to make it.  Say things like, "it took me over eleven attempts to get this mixtape just right," or, "I was up until 3 a.m. finishing this for you."  You want to give the impression that this mixtape took hours and hours of concentration and hard work, even if it didn’t.

14) Ask for feedback.  It is good to know what the person thought of their mixtape.  It’s important to find out which songs they loved, and which songs they hated.  This will mean next time you make them a mixtape it will be even better tailored to fit their musical taste.

15) And lastly, never underestimate the power of a mixtape.  Remember you are using someone else’s poetry to express how you feel.  This is a delicate thing.  If you are making a mixtape for the opposite sex but have no intention of a relationship, do not use songs like "You’re Beautiful", "Sexual Healing" or "You Are the Sunshine of My Life" – it will probably send the wrong message.  Or opposite, if you do want to get together with this person, adding a few of the above tracks will give them a clue about how you feel.  A mixtape is sometimes the best way for sensitive self-expression when it comes to the tangled intricacies of adolescent relationships.

So now you have all the ingredients you need to create the perfect mixtape.  Whether you want to get a girl, heal a broken friendship or give a thoughtful present – a mixtape is the perfect solution.  So go ahead and start creating.