Click here for photos of The Asteroids Galaxy Tour at 2011 Culture Collide Festival in Los Angeles, CA in the QRO Concert Photo Gallery

The Asteroids Galaxy Tour kind of straddle two worlds, and not just because they’re Danes who make "ska for people who don’t like ska anymore."  They’re somewhere between an indie-pop band and a nightclub dance band, somewhere between those two crowds.  When they came to New York in November for a few special dates, they balanced that by doing one night (QRO concert listing) at ubiquitous indie-club Mercury Lounge (QRO venue review), and one night (QRO concert listing) as part of event promoter GBH’s Saturday night shows at the Tribeca Grand Hotel, on November 14th  Judging by the latter show, please don’t go nightclub-dance… 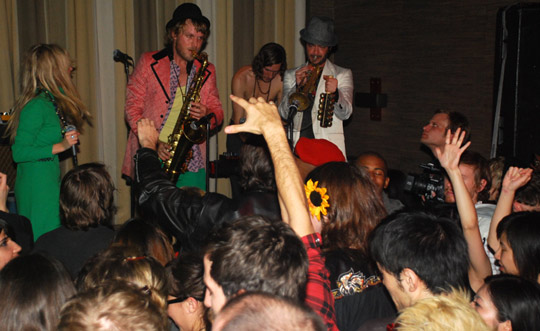 Click here for photos of The Asteroids Galaxy Tour at SXSW 2009 in Austin, TX in the QRO Concert Photo Gallery

Click here for QRO’s review of The Asteroids Galaxy Tour at Studio at Webster Hall in New York, NY on November 21st, 2008

On Saturday nights, GBH books a band and a DJ at the dance-club space on the ground floor of the Tribeca Grand Hotel.  Not only is it free with RSVP, but there’s an open vodka bar, 10:00 PM – 11:00 PM, with the band scheduled right afterwards.  It all sounds great on paper, but falls apart in practice.  The crowd is a dance club crowd, wedged tightly into the small, thin, oddly angled space (QRO venue review), especially the bottleneck between the bar and the soundboard.  They’re drunk & sweaty from the first hour, and seem to have no concept of ‘there’s no space there’.  They arrive in bunches, and are as interested in taking photographs of each other as they are of seeing the band.  The stage is only a foot off the ground, actually lower than that of the DJ, making it difficult to see.  While the speakers are certainly loud enough (at least for the DJ…), the place is barely set up for bands, and all of their equipment.

Not that The Asteroids Galaxy Tour didn’t give it their all.  They started with two of their biggest crowd-pleasers, "Push the Envelope" and "The Sun Ain’t Shining No More", and, despite their own complaints about the heat & soundsystem, were making a go of it with "Around the Bend" and "Bad Fever".  Unfortunately, they frontloaded their set list, and the evening started to get weary with the following "Hero".  They invited some rapper on stage for the subsequent "Crazy", but he didn’t do a whole lot, and it’s not like you could see him anyway.  "The Golden Age" did bring back the show a bit, at least earning encore return (not that they ever left the stage, or could have…) "Sunshine Coolin’".  But they had to apologize that they had to cut the set short, due to technical difficulties (though what else would they play?  By that point, they’d done every song from their lone LP, Fruit – QRO review).

The Asteroids Galaxy Tour has been a GBH favorite for a while – last year, the band played (QRO live review) for GBH at Studio @ Webster Hall (QRO venue review), as part of a three-floor GBH event at Webster Hall (QRO venue review).  Their music is certainly danceable, they’ve got a cute frontwoman in Mette Lindberg, and have the up-mainstream appeal of being featured in an iPod ad.  But for better shows, play for the people/places that are there for the music, not the event.