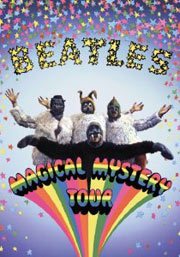 On Boxing Day (the day after Christmas in the U.K.), 1967, BBC 1 aired The Beatles’ Magical Mystery Tour, a one-hour special conceived, produced, and directed entirely by the Fab Four.  The group had previously done films with music in Help! and A Hard Day’s Night, but those were of the early mop-top Beatles, in suits & in black-and-white – this was the late sixties hippie Beatles, in full colour.  Moreover, this was not a BBC-run production, but solely from the greatest band in rock ‘n’ roll.

Hunter Davies, The Beatles’ only authorized biographer, said, "It was the first time in memory that an artist felt obliged to make a public apology for his work."  Without a plot or even real performances, the critics called it an indulgent, and audiences didn’t think much better.  Some of that was no doubt due to the BBC airing the special in black-and-white, though it was shot in color (most television sets in Britain at the time were still black-and-white), but it still has remained a low point in The Beatles’ seminal story.  And now that low point comes to DVD, in full color, with extras that include a director’s commentary by none other than Sir Paul McCartney.

The film itself is still essentially a hippie mess, with virtually no plot or even real acting.  The Beatles and the rest of the cast mostly just bounce around on the bus and in scenes that start nowhere and go nowhere.  There are some strong moments, most notably their only video ever of "I Am the Walrus", but oddly less is done visually in the songs than in the rest of the film ("Fool On the Hill" is just shots of McCartney on hills, while "Blue Jay Way" is just distorted images of George Harrison sitting cross-legged playing a chalk drawing of piano keys on the floor – visual film stunts that members were interested in at the time, but don’t really hold up).  In fact, after "Walrus" and big final dance number "You Mother Should Know", the best musical portion is one not by The Beatles, but the Bonzo Dog Doo-Dah Band performing "Death Cab For Cutie" with a stripper [note: yes, that’s where that band of today got their silly name – QRO album review].  The dream romance between Ringo Starr’s Aunt Jessie and the conductor Buster Bloodvessel is just thrown in there, like most everything else.

It should be said that visually the film was likely ahead of, or at least on the leading edge of its time, with rich colors.  One can certainly tell that viewing it in the black-and-white initial BBC1 broadcast would have taken away from that – the instrumental "Flying" sequence was aerial footage (unused footage from Stanley Kubrick’s famed Dr. Strangelove) given color washes – only can only imagine how dull it would have looked in black-and-white.

There is actually an odd similarity to Monty Python’s Flying Circus in many of the scenes: the incoherent jabbering of the army drill sergeant played by Victor Spinetti (derived from his performance in the stage play ‘Oh, What a Lovely War!’) brings to mind Graham Chapman’s famed military portrayal ("Stop being silly!"), the sped-up camera work of a marathon akin to Python’s ‘Upper Class Twit of the Year’ sketch, Auntie Jessie’s dream of eating massive quantities of food like the morbidly obese Terry Jones in The Meaning of Life (with John Cleese’s skeevy waiter played by John Lennon, including thin mustache), and the white coat and tails old-style dance ending of The Beatles performing "Your Mother Should Know" akin to similar style vision of heaven in The Meaning of Life.  However, Magical Mystery Tour is without any of the jokes or real comedic acting.

Of course, as Magical Mystery Tour came out before even the television series of Monty Python, it could be said The Beatles influenced The Pythons, but it was most likely that both sprang from the same late sixties absurdist well – just that one was done by incredibly skilled comedians, the other by incredibly skill musicians.  In 1975 Monty Python did get approval from all four Beatles to show the film as the curtain raiser before Monty Python and The Holy Grail, but the idea did not go ahead.

McCartney’s director’s commentary is probably the primary reason one would get Magical Mystery Tour DVD, as it’s a Beatle talking about something The Beatles created.  There are a number of nice little behind-the-scenes stories, like "The Mighty Beeb" cutting the romantic scene between Auntie and Bloodvessel for no specific reason (and not playing The Beatles much for the entire program), or that Auntie Jessie’s dream about food actually was a dream Lennon had (at least partly derived from his stepfather, who had been a waiter with slicked back hair and a thin mustache, which Lennon portrayed in Tour).  "Why the hostess Mandy is in it with her top off, in a white bra, is left to the imagination…" – before McCartney admits that, "being virile young men," they enjoyed being able to tell someone to take their top off and they would (he also notes that many people in the dream sequence – male and female – had their tops off).  And why did McCartney have a black carnation during the dance sequence or "Your Mother Should Know", while the rest of the band had red ones?  Because he got his last, and they were out of red carnations – but it became part of the ‘Paul is dead’ rumors (of course, ‘this’ McCartney would say that, wouldn’t he?…).

With regards to the larger production, McCartney describes it as kind of a ‘home movie of something that never happened’ and their childhood ideas of an actual ‘Magical Mystery Tour’ (which were undoubtedly greater than what such tours actually were).  There is much talk of it being intentionally surreal in a French New Wave, Fellini-esque way, but also more and more admitting to it being not only made up as it went along, but done in such a ‘let’s just have fun’ manner that it made editing a nightmare (lack of clapboards made synching the sound very difficult, for one).  McCartney even admits to at least one professional actor in the crew being unhappy with The Beatles’ direction, as the professional actors were used to professional directors – but then adds that the actor is now probably best known for appearing in Magical Mystery Tour.  Later in the commentary, McCartney describes it as a "snapshot" of who and what The Beatles were at that time, and an authentic one, since it was done solely by them.  But he also admits that, while they thought it would be a perfect fit for a Boxing Day variety special, audiences – mostly older (including TV critics) – were used to more professional variety specials that usually ran on Boxing Day.

‘The Making of Magical Mystery Tour’ extra does a strong job of capturing both the make-it-up-as-you-go-along nature of making the movie, as well as the relaxed atmosphere in making it that you wouldn’t & couldn’t have today (for instance, there was no security on the shoots).  At the start of the day, the actors and extras had little idea where they were going or what they were doing – and, to a degree, neither did The Beatles.  There are some nice interview moments with Beatles fan club girls who got to appear as extras, plus music press who were attempting to tail the production, and discussion of using a decommissioned airfield base as the main indoor studio.  It also does make clear that this was the vision created & enacted by The Beatles, including directing (mostly by McCartney).  The discussion of editing is a bit short (though it is remarkable that The Beatles spent three months with the editor, seven days a week), and the retelling of the agreement to debut it on BBC1 – which was little more than a handshake between the BBC1 controller & Lennon, with the film sight unseen apart from making sure it was censor-appropriate – only defensively hints at the poor reception that was to follow.

There’s also an amusing but short bit about ‘Ringo the Actor’ (which does highlight that there was no script, with Starr ad-libbing) and details on the supporting cast (including host Jolly Jimmy, played by Derek Royle, who was later to have a memorable cameo as a corpse in John Cleese’s Fawlty Towers – but no info on the gorgeous Hostess, Mandy Weet).  Also included are vignettes of "Your Mother Should Know", "Blue Jay Way", and "Fool On the Hill", the "Hello Goodbye" from Top of the Pops 1967 (which includes footage of The Beatles in the editing room), and cut scenes including Chaplin-esque ‘bathing beauties’ "Nat’s Dream", Ivor Cutler’s (Buster Bloodvessel) organ song "I’m Going In a Field", and Traffic playing "Here We Go Round the Mulberry Bush".

Many surreal or avant-garde productions of the hippie era, especially films, were received poorly, only for the creators to claim that their pieces will be appreciated by later generations (take The Monkees’ Head).  Magical Mystery Tour is still a mess, forty-five years later, but a cheery one that – with the behind-the-scenes extras – does capture the greatest band in music.  In his commentary, McCartney points out a small moment, where Lennon comfortably plays around with the child one of one of the passengers, as an intimate moment of a relaxed Lennon that the world rarely ever saw – that McCartney rarely ever saw.  And even if Magical Mystery Tour makes about as much sense as a child, it’s also as honest and revealing as one, too.