The Bird and The Bee : Ray Guns Are Not Just the Future

<img src="http://www.qromag.com/wp-content/uploads/2009/01/thebirdandthebeerayguns.jpg" alt=" " />L.A.'s indie-pop duo The Bird and The Bee follow up their breakthrough with energy on their sophomore full-length, <i>Ray Guns Are Not Just the Future</i>.... 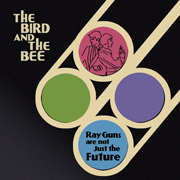 Indietronic-pop duo Inara George and Greg Kurstin, i.e. The Bird and The Bee, broke out in 2007 with their self-titled debut, as an edited remix of their track “Fucking Boyfriend” topping the Hot Dance Club Play chart the prior December.  This saw George & Kurstin tour the country and release a couple of EPs.  The Los Angeles pair now follows-up The Bird and The Bee with Ray Guns Are Not Just the Future, a record that takes their sweet sound and gives it a grabbing energy.

After a sub-thirty second opening “Fanfare”, “My Love” introduces the duo’s bright enchantment, especially in the chorus.  The Bird and the Bee have kept their beats and sunshine, but added on top of it varying attitudes and electricity, making for a more diverse and gripping record.  Nowhere does that come out more so than with the following “Diamond Dave”: the infectious track, detailing obsession with a musician, is just the right balance of play on and play with sixties girl-group pop.

Unfortunately, the rest of the record doesn’t reach those “Diamond” heights, but it does deliver a far wider mix than the simpler The Bird and The Bee, albeit certain approaches are better than others.  Some mash-ups don’t quite pair up perfectly, like the pushing monochrome beat with brighter atmosphere of “What’s In the Middle” and slow-sad verse vs. sunshine chorus on the title track.  Some of the more discotronic pieces, such as “Meteor”, “Phil”, and “Polite Dance Song” are a touch forgettable, while the lullaby-love “Baby” is interesting, but not quite the sum of its stripped and sparkling parts.

Yet amidst this, “Love Letter To Japan” comes through strongly, thanks to its toe-tapping stop-start beat and lyrics of the east.  And Ray Guns finishes strong, starting with the girl-pop-beat “You’re a Cad”.  “Witch” is maybe the most remarkable song on the record, ‘grand damé’ in a French New Wave of the fifties way, including a bit of bossanova Bond theme.  “Birthday” starts stripped on interesting beats, and shifts into also interesting reverb-pop.  Only final track “Lifespan of a Fly” lets down the back-end of the record, as its little plucking haunt somewhat boring.

Where their first album was relatively one (sweet) note and not for everyone, The Bird and The Bee have wisely had their sound follow their horizons, and expand.  Sixties pop revivals need something more to avoid being retreads, and George & Kurstin have found that in added energy and diversity as they look forward on Ray Guns Are Not Just the Future.