<img src="http://www.qromag.com/wp-content/uploads/2010/07/theblackkeysbrothers.jpg" alt=" " />Self producing their sixth studio LP, the blues-rock duo from Akron, Ohio mines the spirit of Muscle Shoals, the Mississippi Delta and the American... 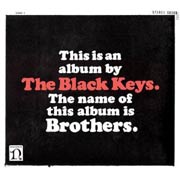 Self-producing their sixth studio LP, the blues-rock duo from Akron, Ohio mines the spirit of Muscle Shoals, the Mississippi Delta and the American garage.  Yet instead of trying to pawn their plunder off as something new, vocalist/guitarist Dan Auerbach and drummer Patrick Carney dangle their musical influences on their riffs and melodies like captured booty.  The result is their most transparent and successful offering to date.

Sonic reverberations and found sounds such as those Jimi Hendrix panned through listener’s brains on Are You Experienced? introduce “Next Girl”.  Then a tsunami of warbled and fuzzed out guitars collide with desert drums.  Vocals delivered with a crushed-but-not-broken-spirit lament the trials and tribulations of love lost, “Oh my next girl will be nothing like, my ex girl / I made mistakes back then, I’ll never do it again / It was a painful dance, now / I got a second chance.”

Click here for photos of The Black Keys at Bell Centre in Montreal, PQ, Canada on July 11th, 2011 in the QRO Concert Photo Gallery

Click here for photos of The Black Keys at 2010 Osheaga Music Festival in Montreal, PQ, Canada in the QRO Concert Photo Gallery

Click here for photos of The Black Keys at SXSW 2010 in Austin, TX in the QRO Concert Photo Gallery

Click here for photos of The Black Keys at 2009 Voodoo Experience in New Orleans, LA in the QRO Concert Photo Gallery

Click here for photos of The Black Keys at Terminal 5 in New York, NY on February 7th, 2009 in the QRO Concert Photo Gallery

Click here for photos of The Black Keys at McCarren Park Pool in Brooklyn, NY on August 7th, 2008 in the QRO Concert Photo Gallery

The staccato guitars and Jock Jams drums of Gary Glitter’s “Rock n Roll Part 1 & 2” serve as the bedrock for “Howling for You”.  Auerbach takes the homage one step further singing “Da-da-da dat da!”  However, when he delivers the lyric, “Mockingbird / Can’t you see? / Little girl’s got a hold on me like glue / Baby I’m howling for you,” he’s got Howling Wolf stuck in his throat and Muddy Waters on his mind.

The aptly titled instrumental “Black Mud” is a murky, intoxicating tonic of nasty guitars, and backbeat drums built around the riff from “Susie Q” (as performed by John Fogerty and Credence Clearwater Revival).  With its bad-acid-trip-through-the-swamp-sensation, “Black Mud” would make a chilling addition to a future Apocalypse Now soundtrack.

“Ten Cent Pistol” employs a laid back and spacious chord progression reminiscent of “Harlem Shuffle”.  There is little in the music to support the tragedy depicted in the lyrics and the juxtaposition is striking.  “There’s nothing worse in this world / Than payback from a jealous girl / The laws of man / They don’t apply / When blood gets in a woman’s eye.”

Brothers tugs between throwing rocks-and-rolling in the dirt, leathery stomps (“Tighten Up”, “She’s Long Gone”, “Sinister Kid”) and hung over, vinegar-doused caresses (“These Days”, “The Only One”).  The songwriting is appealing in spite of and because of the familiarity.  The duo pays their respects yet is not bound to the traditions on which they thrive and dine.  Like Elvis, Led Zeppelin, The Rolling Stones, The White Stripes (QRO live review), Sharon Jones & The Dap Kings (QRO album review), and countless other acts who stand in the large musical shoes of their revered predecessors, The Black Keys don’t just walk awhile trying things on for size, they make up a new dance for themselves.  In the process, they revitalize and re-invent a genre for new generations.