The Boy Least Likely To : The Law of the Playground

<img src="http://www.qromag.com/wp-content/uploads/2009/08/theboyleastlikelytothelaws.jpg" alt=" " />The Boy Least Likely To's <i>The Law of the Playground</i> is the perfect remedy to a bad day. ... 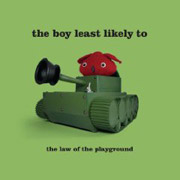 We live in an era of entirely predictable music.  Music that lacks character, charm and in many cases a decent melody.  With that said, occasionally one stumbles upon a band that is so refreshingly original, it reassures us that though scarce, good music still exists somewhere out there.  The Boy Least Likely To provides such reassurance.  The band’s album, The Law of the Playground, has such a unique sound that one finds it impossible to put a label on it; their sound completely defies definition.

Listening to the album magically transports you to a time of youthful innocence and naïveté.  A time when magic was real and reality was whatever you wished it to be, a time where colours seemed brighter and more vivid.  Though this may seem a bit twee, the album itself is as poignant as it is poetic.  Main lyricist Jof Owen sings about neuroses and delusions, which range from the difficulties of fitting in, to arachnophobia, to a fear of flying and ultimately to death.

Despite the subtle nuances of paranoia and angst, The Law of the Playground is extremely fun to listen to; is the perfect remedy to a bad day, and is as incredibly catchy as it is entertaining!