The sisters Deal & co. played to a packed McCarren Park Pool in a massive event. Alt-icons way back when for 1993’s Last Splash, The Breeders disappeared for almost a decade, only to release the poorly received Title TK in 2002.  Luckily, singer/guitarist Kim Deal’s earlier, even more iconic act, The Pixies, reunited a few years later, and the waves of adulation that followed brought Kim & sister Kelley’s Breeders back as well, releasing Mountain Battles (QRO review) earlier this year.  While Battles is no Splash, the band was still able to deliver an impressive set at Brooklyn’s McCarren Park Pool (QRO venue review) on Sunday, July 13th as part of the last summer of the free Pool Parties (QRO Festival Guide).

After the rain-soaked inaugural two weeks prior with The Hold Steady & more (QRO photos of J. Roddy & The Business), and last week’s older-skewing Ronnie Spector show (QRO photos), the Pool didn’t know what hit it when The Breeders came to town, with a massive line and people even attempting to climb the fence to get in.  Local heroes Matt & Kim threatened to overshadow The Breeders, thanks to an amazing set with the Rude Mechanical Orchestra (QRO photos), but the veteran Deal sisters more than held their own as they dived into their entire discography & more.

That could be seen right from the get-go with opener “Tipp City”, from Kim Deal’s other side-project, The Amps.  Along with “Pacer”, The Breeders hit up two Amps tracks, along with not only their cover of The Beatles’ “Happiness Is a Warm Gun” (first covered in The Breeders’ 1990 debut, Pod), but also a rendition of fellow Dayton, Ohio hometowners Guided By Voices’ “Shocker In Gloomtown”.  However, aside from “Happiness”, most of these were bunched in the beginning, along with the only Title TK track (and the best/only good one on the record), “Huffer”, up after “Tipp”. 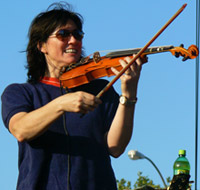 Most of the set was still divided between Mountain Battles and Last Splash.  While a few of the Battles numbers stood up well in the Pool, like “Overglazed”, “It’s the Love”, and “Bang On”, it was still the Splash pieces which were the biggest hits.  And not just classic single “Cannonball” (though that still was as fun as ever) – “Divine Hammer” smashed early on, while “Saints” sent the night out in style.  And special mention has to be made of “Drivin’ On 9”, thanks to Kelley Deal’s violin.

It wasn’t just with the violin that the Deal sisters mixed things up.  On a couple of songs, Kelley stepped aside; on a couple of others, Kim did.  Kim played keyboards for a few, and Kelley just sang with Kim & her acoustic on the penultimate “Here No More” from Battles.  They also joked around with the crowd, about such things as Kelley’s violin playing (Kim made a remark about it when Kelley was off-stage getting her instrument, and Kelley returned in mock-anger at her sister & the crowd), German (for Battles’ “German Studies”), and the imminent demise of the Pool Parties (Kelley was actually shocked more people weren’t happy about getting a pool – obviously, no one told her that the people who go to these things don’t live there…).  While there was no encore, The Breeders played almost the exact same set as they did at Webster Hall (QRO venue review) last month – including that night’s encore (someone even tried to trick Kim into serenading her with “Happy Birthday”, as was done at Webster, but Kim wisely asked, “What’s your date of birth?”  Reply: “What day is today?…”).  All in all, a very welcome return.