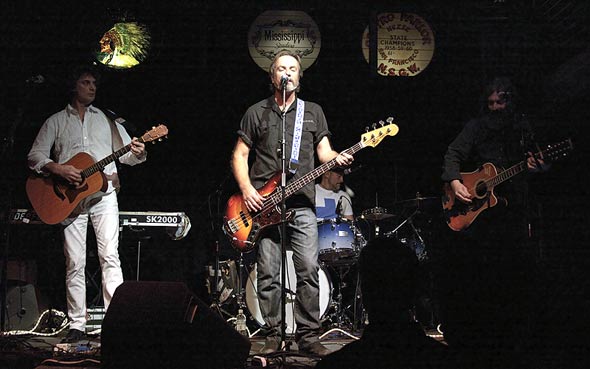 Back in 1980, four skinny, young lads performed their first concert as The Church.  The volatile chemistry among the band members in those early days, one would not have anticipated the Australian group’s impressive longevity.  Though Tim Powles is The Church’s fourth drummer, guitarists Peter Koppes and Marty Willson-Piper, and singer/bassist, Steve Kilbey (with brief departure of Koppes in the ‘90s) have survived 30 years together.  Bands like Echo & The Bunnymen and The Psychedelic Furs (QRO live review), who Pandora usually lumps The Church with, have long since ceased to put out new material and rely on high school memories of their audience for ticket sales.  Meanwhile, The Church kept fine-tuning their craft, evolving from Byrd-esque, lush psychedelic pop to Pink Floyd-tinged, progressive space-rock. 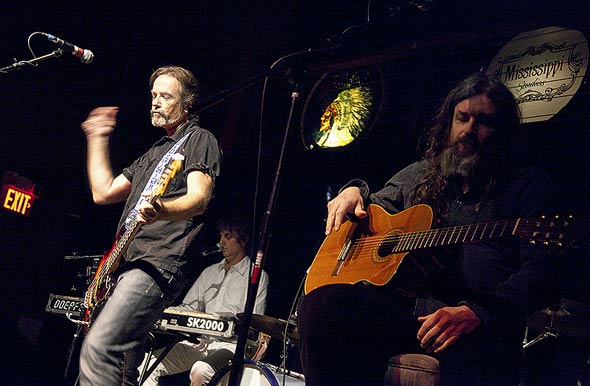 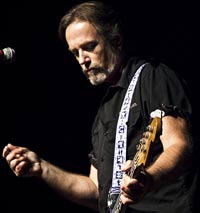 With last year’s critically acclaimed release, Untitled #23, The Church saw the warmest response in years from outside of their fan base.  Recovered from his heroine addiction, Kilbey, the once stoic performer, graced the stage like a butterfly in an expansive garden.  The band’s electrifying live set dispelled any fear of their retirement.  After taking few months off from the American soil, they are back for a tour, unlike any other.

On April 8th, 2010 at The Mississippi Studios in Portland, Oregon, the audience was treated to the most intimate of The Church’s ‘An Intimate Space’ 30th anniversary tour.  The band probably could not recall the last time they played in a venue of such a small scale and was made even smaller by having it seated.  The limited capacity meant higher ticket price, compared to other sites’ prices ranging in the $20s.  Even at $40, it was difficult to argue that you didn’t get your money’s worth.  At entry, one was given a beautiful full-color booklet, and a copy of Deadman’s Hand EP, produced exclusively for the tour.  Willson-Piper later joked, "CDs are free; autographs are $15 each."  With almost two and a half hour of memory and history intertwined with indelible music and banters, you couldn’t help feeling that it was one of the best concert experiences of your life. 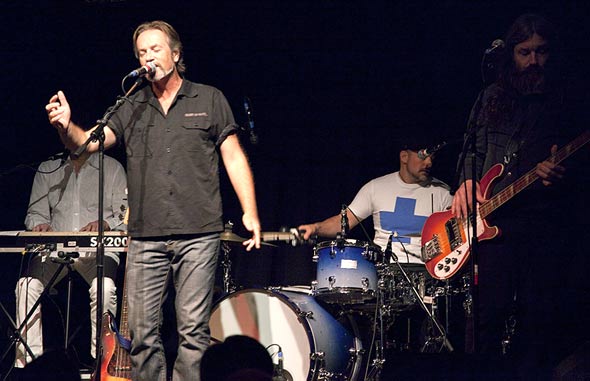 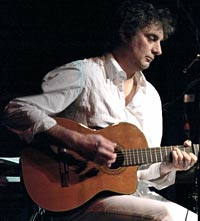 The stage barely kept the four members of the band from bumping into each other and the venue was ill equipped for proper lighting.  Occupying his usual center position, Kilbey stood under a bright white light that could’ve been a portal to an alien spaceship.  The rest of the band hovered at the edge of luminescence.  Ironic symbolism, considering that the democracy transmuted from Kilbey’s near-autocracy saved The Church from extinction.  Despite being an ‘acoustic tour’, only the two guitarists swapped out their trademark instruments.  Instead of his milk-white Fender, Koppes strummed acoustic Taylor six-string, occasionally picking up the mandolin, sitting behind a mini piano and blowing through a harmonica.  Willson-Piper plucked away on a well-aged, tape-plastered twelve-string Takamine while his sunburst Rickenbacker did make an appearance, but in the form of a bass.  Kilbey still donned his Fender electric bass and Powles seemed to have a pretty full Mapex drum set. 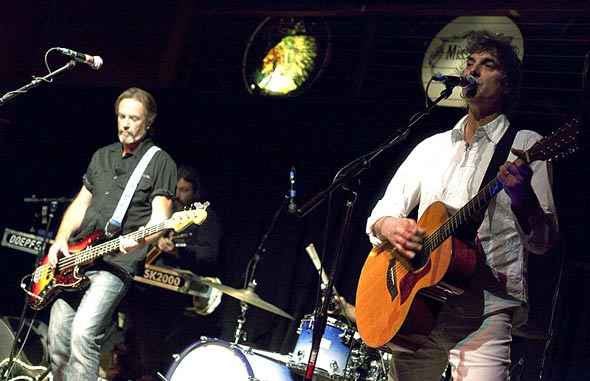 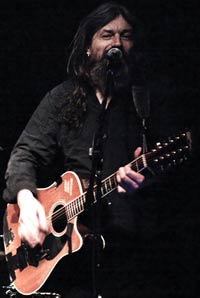 The set list (QRO photoQRO review) was locked for the whole tour.  Song from each of their three decades worth of albums, played chronologically backwards, from 2009’s Untitled #23 to 1980’s Of Skins and Heart.  Some audience members were surely delighted that The Church included songs from their re-worked albums, which meant they were treated to two songs from some of their catalogue.  Not only did they get to hear "Under the Milky Way" from their biggest selling album, 1988’s Starfish, but also "Reptile", El Momento Siguiente (2007) edition.  "Unguarded Moment", acoustically reworked in El Momento Descuidado (2005). and "Tear It All Away", both from their debut album, Of Skins and Heart, were rarely heard live, as well as the gothic "Fly", from 1983’s Séance.  Another rarity, the spirited "Already Yesterday" from Heyday, was given a down-tempo treatment – perhaps to slow down those yesterdays that in 1986, didn’t seem to pass by so fast.

While Kilbey’s pensive, soothing vocals, delivered in a hybrid of English-Australian accent is one of the most unique in the industry, and one of The Church trademarks, none of members are strangers to exercising their vocal chords.  Koppes, the only actual Australian-born member, softly crooned on "Appalachia" from 2004’s Forget Yourself, and Willson-Piper’s husky British lisp floated on "10,000 Miles" from 1984’s Remote Luxury.

When the last song of the 30th anniversary program was announced, the crowd, and the band, seemed to share the sorrow of a farewell.  New Zealander Powles joked that in twenty years, they’ll come back and play a much longer set, with free wheelchair access.  Who knows how the four musicians decided which track should be played from each album.  But "Tear It All Away", a song seemingly about trying to break down the illusions people create, seemed to be a fitting summation of their career. 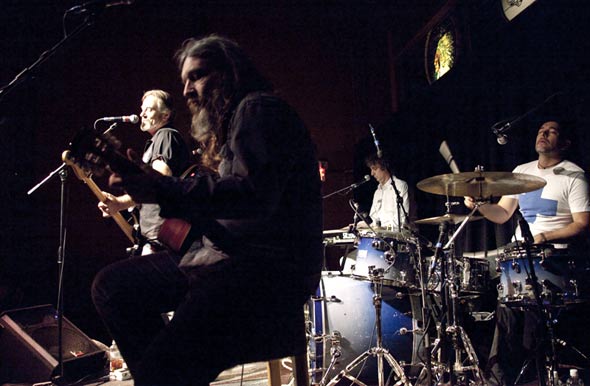 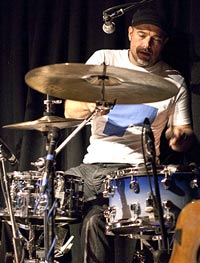 After 18 songs down the memory lane, the audience would be lucky to get an encore.  But The Church gave two.  After a brief break from the tiny stage, the band returned to cover Smashing Pumpkins’ "Disarm".  A response to the Pumpkins’ cover of The Church’s "Reptile", Kilbey’s melancholic and sedative rendition smashed the listeners’ hearts into thousands of pieces more than Billy Corgan’s screeching cry ever could.  The ballad was followed by "Space Saviour", a sonic odyssey that weaves through the calmness of vast universe to take part in an intergalactic battlefield.  Willson-Piper did his best to transfer electric energy to his Takamine for the final song, "Grind", from 1992’s Gold Afternoon Fix.  But surely people will also recall the eight-minute epic for Kilbey’s additional lines before the third verse: "I get on this airplane and I sit next to Steve Tyler / He turns to me and says, / ‘Every time, I look in the mirror / All these lines on my face, getting clearer…’"

If anything was unfulfilled by this performance, The Church will return for an electric tour to play Starfish and Untitled #23 in its entirety for the next round.  After thirty years, the iconic band continues to surpass even the most die-hard fan’s expectations. 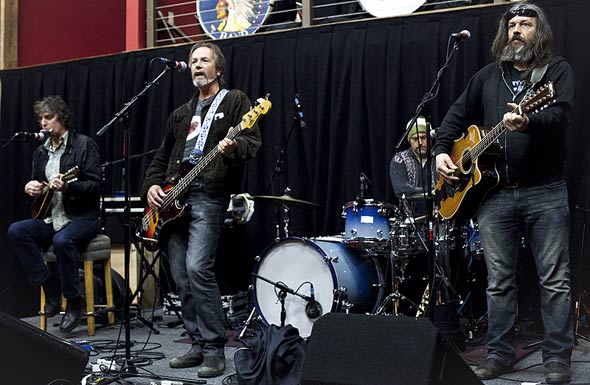